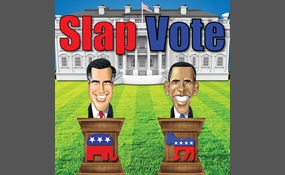 Who do you want to Back Hand?

Barack Hussein Obama II (/bəˈrɑːk huːˈseɪn oʊˈbɑːmə/; born August 4, 1961) is the 44th and current President of the United States. He is the first African American to hold the office. Obama served as a U.S. Senator representing the state of Illinois...  from January 2005 to November 2008, when he resigned following his victory in the 2008 presidential election.Born in Honolulu, Hawaii, Obama is a graduate of Columbia University and Harvard Law School, where he was the president of the Harvard Law Review. He was a community organizer in Chicago before earning his law degree. He worked as a civil rights attorney in Chicago and taught constitutional law at the University of Chicago Law School from 1992 to 2004. He served three terms representing the 13th District in the Illinois Senate from 1997 to 2004   more
13 votes
0 comments
Barack Obama - Voter Comments
No Comments
Vote & Comment
2

Willard Mitt Romney is an American politician and businessman who was the Republican Party's nominee for President of the United States in the 2012 election. Before his presidential bid, he served as the 70th Governor of Massachusetts from 2003 to 2... 007.Raised in Bloomfield Hills, Michigan, by his parents George and Lenore Romney, Mitt Romney spent two and a half years in France as a Mormon missionary starting in 1966. In 1969 he married Ann Davies, with whom he has had five sons. By 1971, Romney had participated in the political campaigns of both of his parents. In that year, he earned a Bachelor of Arts at Brigham Young and in 1975, a joint Juris Doctor and Master of Business Administration at Harvard. Romney then entered the management consulting industry and in 1977 secured a position at Bain & Company. Later serving as its chief executive officer, he helped lead the company out of financial crisis. In 1984, he cofounded and led the spin-off company Bain Capital, a highly profitable private equity investment firm that became one of the largest of its kind in the nation   more
8 votes
2 comments
Mitt Romney - Voter Comments

Seido says2014-08-06T23:39:59.6799254-05:00
Report Post
Romney for flip flopping from relatively intelligible positions to idiotic ones, and Obama for not following through on many of the promises that he's made in addition to supporting things like the NSA.