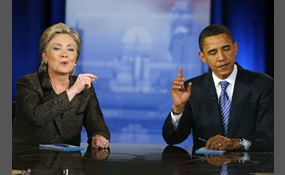 Who do you want to win for Democratic Nomination?

I'm NOT a democrat, but I'm curious as to who democrats want to win

NuriPowers says2015-08-14T02:27:43.4795748Z
Report Post
I feel like he is best prepared even though Hillary Clinton is prepared, except for the whole texting incident.

komododragon8 says2015-08-14T22:04:02.9721268Z
Report Post
He wants to open the border (saving us money), He wont try to ban abortion or gay marriage. Even though I dont agree with all of his economic policies, he may be able to push the minimum wage up a little bit.

Marauder says2015-08-13T18:07:44.6251850Z
Report Post
Go Virginia! also Webb, though he has an impressive reseme in the political field from being a secretary of the Navy and a Senator who could have easily won a reelection if he went for it, is honestly not a politician. He came to the Senate to get done and pass the things he went their to do and when he did he left. he is not a career politician and I respect that.
Vote & Comment
3

Ronald Ernest “Ron” Paul is a 10-term Congressman, medical doctor (M.D.), and a 2008 presidential candidate from the U.S. state of Texas. As a Republican, he has represented Texas's 14th congressional district in the U.S. House of Representatives si... nce 1997, and had previously served as the representative from Texas's 22nd district in 1976 and from 1979 to 1985.Congressman Ron Paul advocates the limited role of government, low taxes, free markets, and a return to monetary policies based on commodity-backed currency. He has earned the nickname "Dr. No" for voting against any bill he believes violates the Constitution. In the words of former Treasury Secretary William Simon, Dr. Paul is the "one exception to the Gang of 535" on Capitol Hill. He has never voted to raise taxes or congressional pay; He voted against the Patriot Act and the Iraq War   more
3 votes
1 comment
Ron Paul - Voter Comments

Harry Brauner was an ethnomusicologist, composer, and professor of music from Romania.Born into a Jewish family with many children, Brauner moved in 1913 to Vienna with his family, where they stayed for two years. When they returned to Romania, they...  lived first in Brăila, and later in Bucharest. There he studied at the Music Academy, having as teachers, among others, Constantin Brăiloiu, Dumitru Georgescu Kiriac and Stefan Popescu. In 1927, he was named secretary of the Composers' Society's so-called Folklore Archives.Brauner was one of those who discovered Romanian folk music diva Maria Tănase in the mid-1930s.During the war, he was a teacher at a Jewish high school in Bucharest, in 1944 he became music adviser at the Romanian Radio Broadcasting Company in charge of folklore, and in 1949 he became head of the Folklore Department at the Music Academy in Bucharest.Brauner was implicated in the show trial against Lucrețiu Pătrășcanu, and spent 12 years in prison, most of it in solitary confinement. He was released from prison in 1962, sent into internal exile to a village near Slobozia. He married Lena Constante in 1964   more
0 votes
0 comments
Harry Brauner - Voter Comments
No Comments
Vote & Comment
8