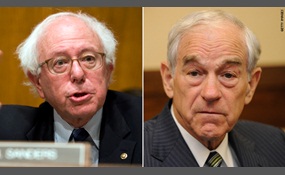 Who has more radical views?

Bernard "Bernie" Sanders is an American politician and the junior United States Senator from Vermont. Before serving in the Senate, he represented Vermont's at-large congressional district in the United States House of Representatives and served as ... mayor of Burlington, the largest city in Vermont. Sanders is a self-described democratic socialist, and has praised Scandinavian-style social democracy.Sanders runs for office as an independent but caucuses with the Democratic Party and is counted as a Democrat for purposes of committee assignments. He was the only independent member of the House during most of his service and is the longest-serving independent in U.S. Congressional history.In an interview with The Nation on March 6, 2014, Sanders stated that he is "prepared to run for President of the United States" in 2016   more
17 votes
8 comments
Bernie Sanders - Voter Comments

AdventurerExplorer says2015-06-28T10:53:17.7823172-05:00
Report Post
Free Healthcare, Free College, $15 Minimum wage, End Income Inequality, End the Corporate influence in politics, A Fight to reverse Climate Change, Paid Sick and family leave and Paid vacation time. Who Else Fights for the middle class Americans as much as he does? Ron Paul is ok but he does't fight for the average worker he just says "Let's take the government out of everything and see how it goes" I can tell Paul that it wont end well

reece says2015-06-28T12:37:49.5927971-05:00
Report Post
Hes the best chance that America has. He takes his inspiration from the social democratic governments in Europe and look how well their doing. It seems like the more a country adopts social democracy , the more prosperous they tend to be.

Ronald Ernest “Ron” Paul is a 10-term Congressman, medical doctor (M.D.), and a 2008 presidential candidate from the U.S. state of Texas. As a Republican, he has represented Texas's 14th congressional district in the U.S. House of Representatives si... nce 1997, and had previously served as the representative from Texas's 22nd district in 1976 and from 1979 to 1985.Congressman Ron Paul advocates the limited role of government, low taxes, free markets, and a return to monetary policies based on commodity-backed currency. He has earned the nickname "Dr. No" for voting against any bill he believes violates the Constitution. In the words of former Treasury Secretary William Simon, Dr. Paul is the "one exception to the Gang of 535" on Capitol Hill. He has never voted to raise taxes or congressional pay; He voted against the Patriot Act and the Iraq War   more
1 vote
0 comments
Ron Paul - Voter Comments
No Comments
Vote & Comment
Leave a comment...
(Maximum 900 words)

MakeSensePeopleDont says2015-06-28T10:59:44.9461263-05:00
Report Post
What's it matter? They are both ridiculous. I mean seriously, if you don't like America and the Capitalist system; if you openly refer to yourself as a Socialist and try and run for office to create a Socialist system, I have a suggestion for you... RENOUNCE YOUR AMERICAN CITIZENSHIP!!! Follow this by leaving the nation and following Snowden to Russia, China, and every other third world oppressive nation on the planet. Welcome to America, you may not be able to help whether or not you were born here, but you can sure as heck take your cash and leave. WAIT!!! Hold on a second, if you like Socialism and it's culture, please, hand me your liquid capitol and all of your assets before leaving....I could really use the cash.

Black-Jesus says2015-06-28T13:01:49.8374231-05:00
Report Post
While I believe that he is trying to raise minimum wage too much and that paid vacations and whatnot should be left to the business, I support Sanders. I'm sick and tired of people that want free and open market systems. The only reason Republicans say that want that is because they don't want restrictions on them and their silver spoon pals. Because they aren't like normal people; politics have business and law education they know that free market capitalism doesn't work out all too well, now bare with me. I like capitalism, I am a capitalist, but there should be restrictions put in place by the government before the wealthy become the government, which they did in the late 19th, early 20th centuries, and are beginning to do again now. A good system, in my humble opinion, is a very, very delicate mix between capitalism and socialism. Because anyone could tell me what the American dream is; to walk into the foreign land of America, or be born there, and make yourself successful out of nothing. There is a reason that this hardly ever happens outside of fiction, because it is far too hard to become rich from being poor, and it would be even harder with the free market of Ron Paul's dreams, as can be seen from the late 19th and early 20th centuries. However, with complete socialism that wouldn't work either, because socialism harms businesses a little too much, and then there is Communism which wouldn't work because the government becomes corrupt way too easy and decreases innovation. Republicans like Ron Paul know this but say different because they want to line their pockets and the pockets of their friends, I mean, trickle down economics? Come on, give me a break. Yeah, let's trust the rich and the wealthy to share their influence and power. And democrats are no damn better, because they just come in, make the same dumb mistakes as the Republicans, then think they can raise taxes on the rich .0001% and that'll just magically fix the economy while they blow $1,000,000,000,000 on moronic stimulus packages

Black-Jesus says2015-06-28T13:09:37.5812180-05:00
Report Post
And please don't even say that if you work hard enough in America then you can become successful, because that's just stupid. Not all poor people are lazy and weakened by drugs and not every rich person is a hard working, hard nosed, "good" person. Of all of the most hard working people I've ever met, literally zero were rich, and about half scraped middle class. Statistically, in the fantasy world of dumb rednecks everywhere, that doesn't add up. The rich people I've met and that I've read about got there because they were either smart, lucky, or born into their wealth. Sure, it is hard work becoming rich even if you start from the middle class, and those people should be praised, but don't act like all rich people are like that, because that is very far from the truth and don't act like all poor people are pieces of crap, because there is such thing as obstacles, something that you obviously never really learned about