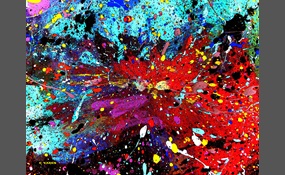 Who in your opinion is the best artist?

I know this is subjective, as such feel free to ask me to add an artist in the comments.

Vincent Willem van Gogh was a post-Impressionist painter of Dutch origin whose work—notable for its rough beauty, emotional honesty, and bold color—had a far-reaching influence on 20th-century art. After years of painful anxiety and frequent bouts o... f mental illness, he died aged 37 from a gunshot wound, generally accepted to be self-inflicted. His work was then known to only a handful of people and appreciated by fewer still.Van Gogh began to draw as a child, and he continued to draw throughout the years that led up to his decision to become an artist. He did not begin painting until his late twenties, completing many of his best-known works during the last two years of his life. In just over a decade, he produced more than 2,100 artworks, consisting of 860 oil paintings and more than 1,300 watercolors, drawings, sketches, and prints. His work included self portraits; landscapes; still lifes; portraits; and paintings of cypresses, wheat fields, and sunflowers.Van Gogh spent his early adulthood working for a firm of art dealers, traveling between The Hague, London, and Paris, after which he taught for a time in England at Isleworth and Ramsgate   more
6 votes
2 comments
Vincent van Gogh - Voter Comments

Banksy is a pseudonymous United Kingdom-based graffiti artist, political activist, film director, and painter.His satirical street art and subversive epigrams combine dark humour with graffiti executed in a distinctive stencilling technique. Such ar... tistic works of political and social commentary have been featured on streets, walls, and bridges of cities throughout the world.Banksy's work was made up of the Bristol underground scene which involved collaborations between artists and musicians. According to author and graphic designer Tristan Manco and the book Home Sweet Home, Banksy "was born in 1974 and raised in Bristol, England. The son of a photocopier technician, he trained as a butcher, but became involved in graffiti during the great Bristol aerosol boom of the late 1980s." Observers have noted that his style is similar to Blek le Rat, who began to work with stencils in 1981 in Paris. Banksy says that he was inspired by "3D", a graffiti artist who later became a founding member of Massive Attack   more
3 votes
1 comment
Banksy - Voter Comments

Andy Warhol was an American artist who was a leading figure in the visual art movement known as pop art. His works explore the relationship between artistic expression, celebrity culture and advertisement that flourished by the 1960s. After a succes... sful career as a commercial illustrator, Warhol became a renowned and sometimes controversial artist. The Andy Warhol Museum in his native city, Pittsburgh, Pennsylvania, holds an extensive permanent collection of art and archives. It is the largest museum in the United States dedicated to a single artist.Warhol's art encompassed many forms of media, including hand drawing, painting, printmaking, photography, silk screening, sculpture, film, and music. He was also a pioneer in computer-generated art using Amiga computers that were introduced in 1984, two years before his death. He founded Interview Magazine and was the author of numerous books, including The Philosophy of Andy Warhol and Popism: The Warhol Sixties. He is also notable as a gay man who lived openly as such before the gay liberation movement   more
3 votes
0 comments
Andy Warhol - Voter Comments
No Comments
Vote & Comment
4

Pablo Ruiz y Picasso, also known as Pablo Picasso, was a Spanish painter, sculptor, printmaker, ceramicist, stage designer, poet and playwright who spent most of his adult life in France. As one of the greatest and most influential artists of the 20... th century, he is known for co-founding the Cubist movement, the invention of constructed sculpture, the co-invention of collage, and for the wide variety of styles that he helped develop and explore. Among his most famous works are the proto-Cubist Les Demoiselles d'Avignon, and Guernica, a portrayal of the German bombing of Guernica during the Spanish Civil War.Picasso, Henri Matisse and Marcel Duchamp are regarded as the three artists who most defined the revolutionary developments in the plastic arts in the opening decades of the 20th century, responsible for significant developments in painting, sculpture, printmaking and ceramics.Picasso demonstrated extraordinary artistic talent in his early years, painting in a realistic manner through his childhood and adolescence. During the first decade of the 20th century, his style changed as he experimented with different theories, techniques, and ideas   more
2 votes
0 comments
Pablo Picasso - Voter Comments
No Comments
Vote & Comment
5

Oscar-Claude Monet was a founder of French Impressionist painting, and the most consistent and prolific practitioner of the movement's philosophy of expressing one's perceptions before nature, especially as applied to plein-air landscape painting. T... he term "Impressionism" is derived from the title of his painting Impression, soleil levant, which was exhibited in 1874 in the first of the independent exhibitions mounted by Monet and his associates as an alternative to the Salon de Paris.Monet's ambition of documenting the French countryside led him to adopt a method of painting the same scene many times in order to capture the changing of light and the passing of the seasons. From 1883 Monet lived in Giverny, where he purchased a house and property, and began a vast landscaping project which included lily ponds that would become the subjects of his best-known works. In 1899 he began painting the water lilies, first in vertical views with a Japanese bridge as a central feature, and later in the series of large-scale paintings that was to occupy him continuously for the next 20 years of his life   more
2 votes
0 comments
Claude Monet - Voter Comments
No Comments
Vote & Comment
6

Salvador Domingo Felipe Jacinto Dalí i Domènech, 1st Marqués de Dalí de Pubol, known as Salvador Dalí, was a prominent Spanish Catalan surrealist painter born in Figueres, Spain.Dalí was a skilled draftsman, best known for the striking and bizarre i... mages in his surrealist work. His painterly skills are often attributed to the influence of Renaissance masters. His best-known work, The Persistence of Memory, was completed in August 1931. Dalí's expansive artistic repertoire included film, sculpture, and photography, in collaboration with a range of artists in a variety of media.Dalí attributed his "love of everything that is gilded and excessive, my passion for luxury and my love of oriental clothes" to an "Arab lineage", claiming that his ancestors were descended from the Moors.Dalí was highly imaginative, and also enjoyed indulging in unusual and grandiose behavior. His eccentric manner and attention-grabbing public actions sometimes drew more attention than his artwork, to the dismay of those who held his work in high esteem, and to the irritation of his critics   more
1 vote
0 comments
Salvador Domingo Felipe Jacinto Dalí i Domènech - Voter Comments
No Comments
Vote & Comment
7

Hans Rudolf "Ruedi" Giger was a Swiss surrealist painter, sculptor and set designer. He was part of the special effects team that won an Academy Award for Best Achievement in Visual Effects for their design work on the film Alien. He was named to th... e Science Fiction and Fantasy Hall of Fame in 2013   more
0 votes
0 comments
H. R. Giger - Voter Comments
No Comments
Vote & Comment
8

Edgar Degas; born Hilaire-Germain-Edgar De Gas; was a French artist famous for his paintings, sculptures, prints, and drawings. He is especially identified with the subject of dance; more than half of his works depict dancers. He is regarded as one ... of the founders of Impressionism, although he rejected the term, preferring to be called a realist. He was a superb draftsman, and particularly masterly in depicting movement, as can be seen in his renditions of dancers, racecourse subjects and female nudes. His portraits are notable for their psychological complexity and for their portrayal of human isolation.At the beginning of his career, he wanted to be a history painter, a calling for which he was well prepared by his rigorous academic training and close study of classic art. In his early thirties, he changed course, and by bringing the traditional methods of a history painter to bear on contemporary subject matter, he became a classical painter of modern life   more
0 votes
0 comments
Edgar Degas - Voter Comments
No Comments
Vote & Comment
9

Gustav Klimt was an Austrian symbolist painter and one of the most prominent members of the Vienna Secession movement. Klimt is noted for his paintings, murals, sketches, and other objets d'art. Klimt's primary subject was the female body; his works...  are marked by a frank eroticism   more
0 votes
0 comments
Gustav Klimt - Voter Comments
No Comments
Vote & Comment
10

Joseph Mallord William Turner, RA was a British Romantic landscape painter, water-colourist, and printmaker. Turner was considered a controversial figure in his day, but is now regarded as the artist who elevated landscape painting to an eminence ri... valling history painting. Although renowned for his oil paintings, Turner is also one of the greatest masters of British watercolour landscape painting. He is commonly known as "the painter of light" and his work is regarded as a Romantic preface to Impressionism. Some of his works are cited as examples of abstract art prior to its recognition in the early twentieth century   more
0 votes
0 comments
J. M. W. Turner - Voter Comments
No Comments
Vote & Comment
Leave a comment...
(Maximum 900 words)