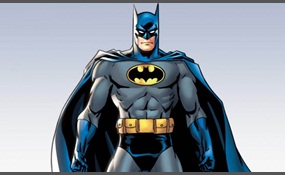 Kevin Conroy is an American stage, screen, and voice actor, known for his voice role as the DC Comics character Batman in the 1990s Warner Bros. Television show Batman: The Animated Series, as well as its various spin-off TV series and feature films...  that made up the DC animated universe. He has also voiced Batman in the Batman: Arkham video game series, as well as various films under the DC Universe Animated Original Movies banner   more
0 votes
0 comments
Kevin Conroy - Voter Comments
No Comments
Vote & Comment
8

Michael John Douglas, better known by the stage name Michael Keaton, is an American actor who became popular for his early comedic film roles, most notably his performance as the title character of Tim Burton's Beetlejuice, and later gained internat... ional fame for his dramatic portrayal of Bruce Wayne / Batman in Tim Burton's Batman and Batman Returns. He has appeared in various other films, including Night Shift, Mr. Mom, Clean and Sober, Pacific Heights, The Other Guys and Jackie Brown, and has also provided voicework for Pixar's Cars and Toy Story 3   more
0 votes
0 comments
Michael Keaton - Voter Comments
No Comments
Vote & Comment
11

William "Will" Emerson Arnett is a Canadian actor, known for his many comedic roles as George Oscar "G.O.B." Bluth II in the Fox series Arrested Development, Devon Banks in the NBC series 30 Rock, Brent Wilts in the IFC series The Increasingly Poor ... Decisions of Todd Margaret, Chris Brinkley on Up All Night and Nathan Miller in the CBS series The Millers. He has appeared in films such as Semi-Pro, Blades of Glory, RV, Hot Rod, Let's Go to Prison, and The Brothers Solomon. Arnett is also a voice actor for commercials, animated films, television cartoons, and video games, most recently providing the voice of Batman in The Lego Movie   more
0 votes
0 comments
Will Arnett - Voter Comments
No Comments
Vote & Comment
12