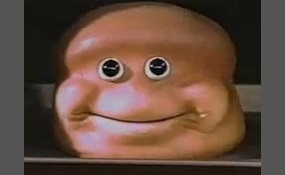 It is a 1986 horror novel by American author Stephen King. The story follows the exploits of seven children as they are terrorized by the eponymous being, which exploits the fears and phobias of its victims in order to disguise itself while hunting ... its prey. "It" primarily appears in the form of a clown in order to attract its preferred prey of young children. The novel is told through narratives alternating between two time periods, and is largely told in the third-person omniscient mode. It deals with themes that eventually became King staples: the power of memory; childhood trauma; the ugliness lurking behind a façade of traditional small-town values. The novel won the British Fantasy Award in 1987, and received nominations for the Locus and World Fantasy Awards that same year. Publishers Weekly listed It as the best-selling book in the United States in 1986   more
3 votes
0 comments
It - Voter Comments
No Comments
Vote & Comment
2

Watches children while they're sleeping. Breaks into houses to give gifts to children. Puts a lump of coal in naughty children's stockings.
2 votes
1 comment
Santa Clause - Voter Comments

Isabella Marie "Bella" Swan is a character and the protagonist of the Twilight series, written by Stephenie Meyer. The Twilight series, consisting of the novels Twilight, New Moon, Eclipse, and Breaking Dawn, is primarily narrated from Bella's point...  of view. In the film series, Bella is portrayed by actress Kristen Stewart.In Twilight, Bella moves to her father's home in Forks, Washington, meets the mysterious Cullen family, and falls in love with Edward Cullen. However, she soon discovers that the family is a coven of vampires. Bella expresses a desire to become a vampire herself, against Edward's wishes. In the second novel, New Moon, Edward and the other Cullens leave Forks in an effort to keep Bella safe from the vampire world. Jacob Black, a member of the Quileute tribe who is also a shape shifter taking a wolf form, comforts the distraught and severely depressed Bella. She comes to care deeply for Jacob, though less than she loves Edward. At the end of Eclipse, Bella becomes engaged to Edward, and they marry in Breaking Dawn   more
2 votes
1 comment
Bella Swan - Voter Comments