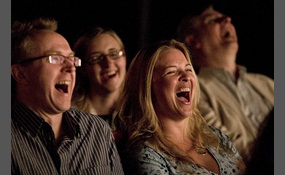 Who is funnier, Jim Gaffigan or Bill Cosby?

William Henry "Bill" Cosby Jr. Is an American comedian, actor, author, television producer, educator, musician and activist. A veteran stand-up performer, he got his start at the hungry i in San Francisco and various other clubs, then landed a starr... ing role in the 1960s action show I Spy. He later starred in his own sitcom, The Bill Cosby Show. He was one of the major performers on the children's television series The Electric Company during its first two seasons, and created the educational cartoon comedy series Fat Albert and the Cosby Kids, about a group of young friends growing up in the city. Cosby also acted in a number of films.During the 1980s, Cosby produced and starred in one of the decade's defining sitcoms, The Cosby Show, which aired eight seasons from 1984 to 1992. It was the number one show in America for five straight years. The sitcom highlighted the experiences and growth of an affluent African-American family. He also produced the spin-off sitcom A Different World, which became second to The Cosby Show in ratings. He starred in the sitcom Cosby from 1996 to 2000 and hosted Kids Say the Darndest Things for two seasons   more
5 votes
0 comments
Bill Cosby - Voter Comments
No Comments
Vote & Comment
2