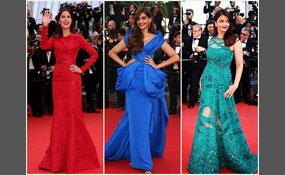 Who is looking the best at the Cannes Film Festival 2015?

Aishwarya Rai, also known as Aishwarya Rai Bachchan, is an Indian film actress and model. Rai has established herself as a leading contemporary actress of Indian cinema and has become one of Bollywood's highest-paid actresses. She has received sever... al awards and nominations, including two Filmfare Awards, and was awarded with the Padma Shri by the Government of India in 2009, and the Ordre des Arts et des Lettres by the Government of France in 2012. She is regarded as one of the most popular and influential celebrities in India, and is often cited in the media as the "most beautiful woman in the world".Rai was the first runner-up of the Miss India pageant, and the winner of the Miss World pageant of 1994. She made her acting debut in the 1997 biographical film, Iruvar and starred in the 1998 romantic drama Jeans. She earned wide public recognition and Best Actress awards at Filmfare for her leading roles in Sanjay Leela Bhansali's 1999 melodrama Hum Dil De Chuke Sanam and the 2002 period film Devdas   more
11 votes
0 comments
Aishwarya Rai Bachchan - Voter Comments
No Comments
Vote & Comment
2

Sonam Kapoor is an Indian actress who appears in Bollywood films.The daughter of actor Anil, Kapoor began her career in film by assisting the director Sanjay Leela Bhansali on his 2005 drama film Black.Kapoor made her acting debut in 2007 with Bhans... ali's romantic drama Saawariya opposite Ranbir Kapoor. Though unsuccessful at the box office, Kapoor's performance earned her a nomination for the Filmfare Best Female Debut Award. She then featured in the political drama Delhi-6, and had her first commercial success with the romantic comedy I Hate Luv Storys. Kapoor garnered praise and earned several Best Actress nominations for portraying a leading role in the romantic drama Raanjhanaa. She also featured briefly in the highly successful biographical sports film Bhaag Milkha Bhaag, and played a leading role in the romantic comedy Khoobsurat.Alongside her acting career, Kapoor is a celebrity endorser for several brands and products. She is particularly known in the media for her outspoken personality, and is cited as one of the most fashionable Indian celebrities   more
4 votes
0 comments
Sonam Kapoor - Voter Comments
No Comments
Vote & Comment
3

Katrina Kaif is a British-Indian film actress and model. Primarily known for her work in Bollywood films, Kaif has also appeared in Telugu and Malayalam films. In addition to being one of Bollywood's highest-paid actresses, she is known as one of In... dia's most attractive celebrities by the media.Born in Hong Kong, Kaif and her family lived in several countries before she moved to India. She received her first modelling assignment as a teenager and later pursued a career as a fashion model. During a London show filmmaker Kaizad Gustad cast her in Boom, a critical and commercial failure. While filming in India, Kaif received modelling assignments and established a successful modelling career. However, filmmakers were hesitant to cast her due to her poor command of Hindi. After appearing in the successful Telugu film Malliswari, Kaif earned commercial success in Bollywood with the romantic comedies Maine Pyaar Kyun Kiya? And Namastey London. She followed with a series of box-office hits, but was criticised for her acting, repetitive roles and inclination to male-dominated films   more
2 votes
0 comments
Katrina Kaif - Voter Comments
No Comments
Vote & Comment
No comments yet.
Leave a comment...
(Maximum 900 words)
Privacy Policy | Terms of Use
Sitemap | View Desktop Version
©2020 Debate.org. All rights reserved.