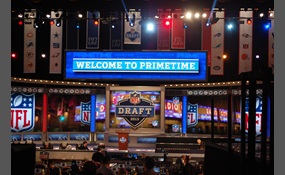 Who is more likely to be the #1 pick in the NFL Draft?

Jonathan Paul Manziel, also known by his nickname "Johnny Football", is an American football quarterback. He was nationally recruited out of high school as a dual-threat quarterback. In 2012, Manziel debuted for the Texas A&M Aggies as a redshirt fr... eshman in Kevin Sumlin's Air Raid offense during A&M's first season in the SEC. He broke numerous NCAA Division I FBS and SEC records, which include becoming the first freshman and fifth player in NCAA history to pass for 3,000 yards and rush for 1,000 yards in a season. At the end of the regular season, he became the first freshman to win the Heisman Trophy, Manning Award, and the Davey O'Brien National Quarterback Award. Manziel capitalized on his redshirt freshman season by leading Texas A&M to a 41–13 victory over Oklahoma in the 2013 Cotton Bowl Classic.Manziel was given the nickname "Johnny Football" by fans and students at Texas A&M University before the start of the 2012 season. The nickname is a registered trademark   more
1 vote
0 comments
Johnny Manziel - Voter Comments
No Comments
Vote & Comment
2

Jadeveon Clowney is an American football defensive end. He graduated from South Pointe High School in Rock Hill, South Carolina and played college football at the University of South Carolina. A unanimous College All-American as a sophomore in 2012,...  Clowney set South Carolina school records in quarterback sacks and tackles for a loss per season while also earning Defensive Player of the Year honors in the Southeastern Conference. Described by ESPN as "one of those rare game-changers on defense", Clowney is projected to be a top-5 selection in the 2014 NFL Draft   more
1 vote
0 comments
Jadeveon Clowney - Voter Comments
No Comments
Vote & Comment
3