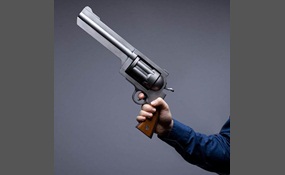 Who is right about Gun Control?

Katana is all that you need.
5 votes
0 comments
Samurai Jack - Voter Comments
No Comments
Vote & Comment
2

Batman is a 1989 American superhero film directed by Tim Burton and produced by Jon Peters, based on the DC Comics character of the same name. It is the first installment of Warner Bros.' initial Batman film series. The film stars Jack Nicholson, Mi... chael Keaton in the title role, Kim Basinger, Robert Wuhl, Pat Hingle, Billy Dee Williams, Michael Gough, and Jack Palance. In the film, Batman deals with the rise of a costumed criminal known as "The Joker".After Burton was hired as director in 1986, Steve Englehart and Julie Hickson wrote film treatments before Sam Hamm wrote the first screenplay. Batman was not greenlit until after the success of Burton's Beetlejuice. Numerous A-list actors were considered for the role of Batman before Keaton was cast. Keaton's casting caused a controversy since, by 1988, he had become typecast as a comedic actor and many observers doubted he could portray a serious role. Nicholson accepted the role of the Joker under strict conditions that dictated a high salary, a portion of the box office profits and his shooting schedule   more
4 votes
0 comments
Batman - Voter Comments
No Comments
Vote & Comment
3

The Terminator series is a science fiction franchise encompassing a series of films and additional media concerning battles between Skynet's artificially intelligent machine network, and John Connor's Resistance forces and the rest of the human race... . Skynet's most well-known products in its genocidal goals are the various terminator models, such as the original "Terminator" character, who was portrayed by Arnold Schwarzenegger from the first film, and similar units he portrayed in the following films. The fifth film in the franchise, entitled Terminator Genisys, is set for release in 2015   more
2 votes
1 comment
Terminator - Voter Comments

The people who are against it

Action Man is an action figure launched in Britain in 1966 by Palitoy as a licensed copy of Hasbro's American "movable fighting man": G.I. Joe.Action Man was originally produced and sold in the United Kingdom and Australia by Palitoy Ltd of Coalvill... e, Leicestershire from 1966 until 1984.The figure and accessories were originally based on the Hasbro 1964 G.I. Joe figure. Hasbro's G.I. Joe figure was patented in 1966. Even the specific method of attaching the appendages was patented as a "Connection for Use in Toy Figures". The first Action Man figures were Action Soldier, Action Sailor and Action Pilot. All were available in the four original hair colours: Blonde, Auburn, Brown and Black. They were accompanied by outfits depicting United States Forces of WWII and the Korean War. In later years, the figures and accompanying uniforms and accessories would more accurately reflect the forces of the United Kingdom. Action Man was subsequently reintroduced in 1993, based on the G.I. Joe Hall of Fame figure of that time   more
0 votes
0 comments
Action Man - Voter Comments
No Comments
Vote & Comment
12