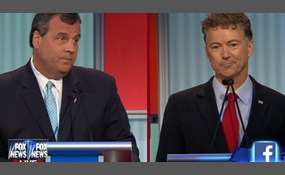 Who is right on domestic surveillance, Christie or Paul?

Randal Howard "Rand" Paul is an American politician and a former ophthalmologist who serves as the junior United States Senator for Kentucky, in office since 2011. He is a member of the Republican Party and the son of former U.S. Representative and ... presidential candidate Ron Paul of Texas.A graduate of the Duke University School of Medicine, Paul began practicing ophthalmology in Bowling Green, Kentucky in 1993 and established his own clinic in December 2007. He became active in politics and founded Kentucky Taxpayers United in 1994, of which he is still chairman. He first received national attention in 2008 when making political speeches on behalf of his father, who was campaigning for the Republican Party's nomination for president. In 2010, Paul ran for the U.S. Senate seat being vacated by retiring Senator Jim Bunning of Kentucky, defeating Kentucky Secretary of State Trey Grayson in the Republican primary. He subsequently defeated the Democratic nominee, Kentucky Attorney General Jack Conway, in the general election   more
22 votes
2 comments
Rand Paul - Voter Comments

Christopher James "Chris" Christie is the 55th Governor of New Jersey and a leading member of the Republican Party.Born in Newark, Christie became interested in politics at an early age, and volunteered for the gubernatorial campaign of Republican T... om Kean in 1977. A 1984 graduate of the University of Delaware, he earned a J.D. At Seton Hall University School of Law. Christie joined a Cranford law firm in 1987, where he became a partner in 1993, and continued practicing until 2002. He was elected as a county legislator in Morris County, serving from 1995 to 1998, during which time he generally pushed for lower taxes and lower spending. By 2002, Christie had campaigned for Presidents George H.W. Bush and George W. Bush; the latter appointed him as United States Attorney for New Jersey, a position he held from 2002 to 2008. In that position, he emphasized prosecutions of political corruption, and also obtained convictions for sexual slavery, arms trafficking, racketeering by gangs, as well as other federal crimes.In January 2009, Christie declared his candidacy for Governor of New Jersey   more
5 votes
1 comment
Chris Christie - Voter Comments

Stocker says2015-08-13T20:25:48.8566506Z
Report Post
Rand Paul has his head in the clouds of a false sense of security generated by the ignorance or lack of knowledge on how easy it can be to successfully produce a mass casualty event verses how hard it can be to predict/detect and prevent one.
Vote & Comment
Leave a comment...
(Maximum 900 words)

benhos says2015-08-07T07:31:51.6789444Z
Report Post
Christie wants to check every citizen's phone records to make sure they aren't terroristic, while Paul wants to obtain a warrant or evidence of terrorism before checking records.

MrFreeThinker says2015-08-07T13:44:52.3936096Z
Report Post
Christie completely denied Rand's statement on the 4th Amendment. So Rand Paul by far because he stood up for the constitution.

Haroush says2015-08-07T22:01:59.5484544Z
Report Post
Let's see... Terrorist can work within the law. If this is the case, then why should we not have surveillance programs targeted at mosques? These terrorist are intelligent and work along side of the sheep. The problem is, if we have to get court orders to do search warrants, then you will tip off the terrorist law enforcement is coming. We don't need to be giving radical Islamist a heads up law enforcement is coming.
Privacy Policy | Terms of Use
Sitemap | View Desktop Version
©2021 Debate.org. All rights reserved.