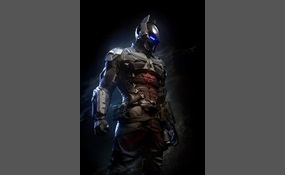 Who is the Arkham Knight

Who do you think the mysterious Arkham knight is in Batman Arkham Knight? Add your own answers.

A new character all together

Artificial intelligence is the intelligence exhibited by machines or software. It is an academic field of study which studies the goal of creating intelligence. Major AI researchers and textbooks define this field as "the study and design of intelli... gent agents", where an intelligent agent is a system that perceives its environment and takes actions that maximize its chances of success. John McCarthy, who coined the term in 1955, defines it as "the science and engineering of making intelligent machines".AI research is highly technical and specialized, and is deeply divided into subfields that often fail to communicate with each other. Some of the division is due to social and cultural factors: subfields have grown up around particular institutions and the work of individual researchers. AI research is also divided by several technical issues. Some subfields focus on the solution of specific problems. Others focus on one of several possible approaches or on the use of a particular tool or towards the accomplishment of particular applications   more
0 votes
0 comments
Artificial intelligence - Voter Comments
No Comments
Vote & Comment
7