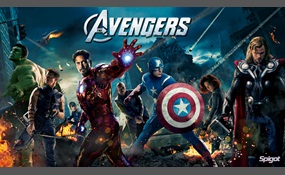 Who is the best Avenger?

Adrian Petriw is the voice of Tony Stark in Iron Man: Armored Adventures.He was a charming, freewheeling genius, but TONY STARK's wealthy life of luxury came to an end the day he lost his father in a tragic accident. Now dependent on his own impress... ive technology for survival and dedicated to battling corruption as Iron Man, the once rebellious Tony must reconcile the pressures of his teenage life with his duties as a Super Hero. Thankfully, Tony has the support of his friends, Rhodey and Pepper, when saving the world - or attending high school - proves too treacherous to face alone   more
10 votes
1 comment
Iron Man - Voter Comments

Thor is a fictional character, a superhero that appears in comic books published by Marvel Comics. The character first appeared in Journey into Mystery #83 and was created by editor-plotter Stan Lee, scripter Larry Lieber, and penciller Jack Kirby.D... ebuting in the Silver Age of Comic Books, the character is based on the god Thor of Norse mythology. He has starred in several ongoing series and limited series, and is a founding member of the superhero team the Avengers, appearing in each volume of that series. The character has also appeared in associated Marvel merchandise including animated television series, clothing, toys, trading cards, video games, and movies.The 2011 film Thor, based on the character and comic, was directed by Kenneth Branagh and starred Chris Hemsworth as Thor. Hemsworth reappears as Thor in The Avengers and Thor: The Dark World as a part of the Marvel Cinematic Universe franchise. Thor placed 14th on IGN's Top 100 Comic Book Heroes of All Time in 2011   more
5 votes
0 comments
Thor - Voter Comments
No Comments
Vote & Comment
3

The Hulk is a fictional superhero that appears in comic books published by Marvel Comics. The character was created by Stan Lee and Jack Kirby, and first appeared in The Incredible Hulk #1. Throughout his comic book appearances, the Hulk is portraye... d as a large green humanoid that possesses near limitless superhuman strength and great invulnerability, attributes that grow more potent the angrier he becomes. Hulk is the alter ego of Bruce Banner, a socially withdrawn and emotionally reserved physicist who physically transforms into the Hulk under emotional stress and other specific circumstances at will or against it; these involuntary transformations lead to many complications in Banner's life. When transformed, the Hulk often acts as a disassociated personality separate from Banner. Over the decades of Hulk stories, the Hulk has been represented with several different personalities based on Hulk and Banner's fractured psyche, ranging from mindless savage to brilliant warrior, and Banner has taken control of the Hulk's form on occasion. Banner first transforms into the Hulk after being caught in the blast of the gamma bomb he invented while saving Rick Jones, a youth who had wandered onto the testing range   more
4 votes
1 comment
Hulk - Voter Comments