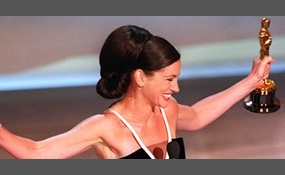 Academy Award winners of Best Actress during the 2000s.

Charlize Theron is a South African and American actress and fashion model. She rose to fame in the late 1990s following roles in the films The Devil's Advocate, Mighty Joe Young, and The Cider House Rules. Theron received critical acclaim for her po... rtrayal of serial killer Aileen Wuornos in Monster, for which she won the Golden Globe Award for Best Actress - Motion Picture Drama, the Screen Actors Guild Award, the Silver Bear and the Academy Award for Best Actress, among several other accolades, becoming the first South African to win an Academy Award in a major acting category. In recent years she has also moved into the field of producing, both in television and film.She received further Academy Award and Golden Globe nominations for her performance in North Country in 2005, and a Golden Globe nomination for her performance in Young Adult in 2011. In 2012 she appeared in Snow White & the Huntsman and Prometheus, both of which were box office successes. Theron became a US citizen in 2007, while retaining her South African citizenship   more
4 votes
1 comment
Charlize Theron - Voter Comments

Kate Elizabeth Winslet, CBE, is an English actress and singer. She was the youngest person to accrue six Academy Award nominations, and won the Academy Award for Best Actress for The Reader. She has won awards from the Screen Actors Guild, British A... cademy of Film and Television Arts, and the Hollywood Foreign Press Association among others, and has been nominated twice for an Emmy Award for television acting, winning once for her role as Mildred Pierce in the 2011 mini-series of the same name. In 2012 she received the Honorary César Award for her life and acting career.Brought up in Berkshire, Winslet studied drama from childhood, and began her career in British television in 1991. She made her film debut in Heavenly Creatures, for which she received her first notable critical praise. She achieved recognition for her subsequent work in a supporting role in Sense and Sensibility and for her leading role in Titanic, the highest-grossing film in the world at the time.Since 2000, Winslet's performances have continued to draw positive comments from film critics, and she has been nominated for various awards for her work in such films as Quills, Iris, Eternal Sunshine of the Spotless Mind, Finding Neverland, Little Children, The Reader and Revolutionary Road. Her performance in the last of these prompted New York magazine critic David Edelstein to describe her as "the best English-speaking film actress of her generation". The romantic comedy The Holiday and the animated film Flushed Away are among the biggest commercial successes of her career   more
2 votes
0 comments
Kate Winslet - Voter Comments
No Comments
Vote & Comment
3

Halle Maria Berry is an American actress and former fashion model. She won an Academy Award for Best Actress in 2002 for her performance in Monster's Ball, becoming the first and, as of 2013, the only woman of African-American descent to win an Osca... r for a leading role. She is one of the highest paid actresses in Hollywood and has been involved in the production side of several of the films in which she performed. Berry is also a Revlon spokesmodel.Before becoming an actress, Berry entered several beauty contests, finishing as the 1st runner-up in the Miss USA Pageant and coming in 6th place in the Miss World Pageant in 1986. Her breakthrough film role was in 1992's Boomerang, which led to roles in films such as The Flintstones and Bulworth. In addition to her Academy Award win, Berry reached a higher level of prominence in the new millennium with roles such as Storm in the X-Men film series, Swordfish, and Die Another Day, where she played Bond Girl Jinx, later finding success in the 2010s with movies such as Cloud Atlas and The Call. She also won the Golden Raspberry Award for Worst Actress in 2005 for Catwoman and accepted the award in person, one of few people to do so   more
2 votes
0 comments
Halle Berry - Voter Comments
No Comments
Vote & Comment
4

Julia Fiona Roberts is an American actress. She became a Hollywood star after headlining the romantic comedy Pretty Woman, which grossed $464 million worldwide. After receiving Golden Globe Awards and Academy Award nominations for Steel Magnolias an... d Pretty Woman, she won the Academy Award for Best Actress for her performance in Erin Brockovich. Her films Mystic Pizza, The Pelican Brief, My Best Friend's Wedding, Notting Hill, Runaway Bride, Ocean's Eleven, Ocean's Twelve, Charlie Wilson's War, Valentine's Day, Eat Pray Love, and Mirror Mirror have collectively brought box office receipts of over $2.6 billion, making her one of the most successful actresses in terms of box office receipts.Roberts had become one of the highest-paid actresses in the world, topping The Hollywood Reporter's annual "power list" of top-earning female stars from 2005 to 2006. Her fee for 1990's Pretty Woman was $300,000; in 2003, she was paid an unprecedented $25 million for her role in Mona Lisa Smile. As of 2010, Roberts's net worth was estimated to be $140 million.Roberts has been named one of People magazine's "50 Most Beautiful People in the World" eleven times, tied with Halle Berry. In 2011, she was named one of the "100 Hottest Women of All-Time" by Men's Health. In 2001, Ladies Home Journal ranked her as the 11th most powerful woman in the United States   more
2 votes
0 comments
Julia Roberts - Voter Comments
No Comments
Vote & Comment
6

Reese Witherspoon was born in March 22, 1976 in New Orleans, Louisana. She is an Academy Award Winner actress and a film producer. Her career began at an early age doing television commercials and modeling. Her first big role was in 1990 with the mo... vie The Man in the Moon. After having success doing a couple of movies (Jack the Bear and A Far Off Place) she graduated from an all girls high school and started attending Stanford University, but not long after she dropped out when she realized that acting was what she really wanted. Reese Witherspoons biggest role came in 2001 when she played the character Elle Woods in the 2001 comedy Legally Blonde. The movie was a big success and she played the role again in Legally Blonde 2 in 2003. Currently divorced from Ryan Phillipe with whom she has 2 kids, shes dating actor Jake Gyllenhaal   more
1 vote
0 comments
Reese Witherspoon - Voter Comments
No Comments
Vote & Comment
8

Dame Helen Lydia Mirren, DBE, is an English actor. Mirren has won an Academy Award, four BAFTAs, three Golden Globes, four Emmy Awards, and two Cannes Film Festival Best Actress Awards. In 2003, she received a damehood for services to the performing...  arts at a ceremony at Buckingham Palace.Mirren began her acting career with the Royal Shakespeare Company in the latter half of the 1960s. From her very first film appearance, Mirren displayed the overtly sensual screen persona that would become her trademark. Other early movies included O Lucky Man!, Excalibur and The Long Good Friday.During her career, she has portrayed three British queens in different films and television series: Elizabeth I in the television series Elizabeth I, for which she received Emmy and Golden Globe Awards for Best Actress, Elizabeth II in The Queen, which won her the Academy and BAFTA Award for Best Actress, and Queen Charlotte in The Madness of King George, for which she earned an Academy Award nomination for Best Supporting Actress. She is the only actress ever to have portrayed both Queens Elizabeth on the screen   more
1 vote
0 comments
Helen Mirren - Voter Comments
No Comments
Vote & Comment
9

Marion Cotillard is a French actress. She garnered critical acclaim for her roles in films such as La Vie en rose, Rust and Bone, A Very Long Engagement, My Sex Life... Or How I Got Into an Argument, Taxi, Furia and Love Me If You Dare. She has also...  appeared in such films as Big Fish, A Good Year, Public Enemies, Nine, Inception, Midnight in Paris, Contagion and The Dark Knight Rises.In 2007, Cotillard starred as the French singer Édith Piaf in La Vie en Rose, for which she received critical acclaim and won several awards, including the Academy Award, BAFTA Award, César Award, and the Golden Globe Award for Best Actress. She made film history by becoming the first person to win an Academy Award for Best Actress in a French language performance. In 2010, she received a Golden Globe nomination for her performance in the musical Nine and in 2012, she received nominations for the Screen Actors Guild Award, Golden Globe Award, BAFTA Award, and the César Award for her performance in Rust and Bone   more
0 votes
0 comments
Marion Cotillard - Voter Comments
No Comments
Vote & Comment
10

Nicole Mary Kidman, AC is an Australian actress, singer and film producer. Kidman's film career began in 1983. She starred in various Australian film and television productions until her breakthrough in the 1989 thriller Dead Calm. Following several...  films over the early 1990s, she came to worldwide recognition for her performances in Days of Thunder, Far and Away, and Batman Forever. She followed these with other successful films in the late 1990s. Her performance in the musical, Moulin Rouge! Earned her second Golden Globe Award and first Academy Award nomination for Best Actress. Her performance as Virginia Woolf in the drama film The Hours received critical acclaim and earned Kidman the Academy Award for Best Actress.Kidman's other notable films include To Die For, Eyes Wide Shut, The Others, Cold Mountain, The Interpreter and Australia. Her performance in 2010's Rabbit Hole earned Kidman further accolades, including a third Academy Award nomination for Best Actress. In 2012, she earned her first Primetime Emmy Award nomination for Outstanding Lead Actress in a Miniseries or a Movie for her role in Hemingway & Gellhorn   more
0 votes
0 comments
Nicole Kidman - Voter Comments
No Comments
Vote & Comment
Leave a comment...
(Maximum 900 words)