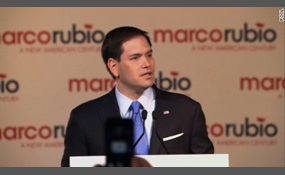 Who is the best choice for Republican nomination?

bobbyjohnson765 says2015-09-17T05:28:12.4227515Z
Report Post
I believe Dr. Carson is among the few GOP candidates who have demonstrated integrity. I feel Ben Carson is the most intellectual candidate, who has showed his ability to lead though his past experiences. He’s lived a life of poverty, understands the struggles of daily life and has devoted the majority of his life to bettering humanity. He expresses respect for one another, refuses to embark in slandering the character of other candidates, and has developed comprehensive solutions to today’s current social and economic issues.
Vote & Comment
3

Richard John "Rick" Santorum is an American attorney and Republican Party politician. He served as a United States Senator representing Pennsylvania and was the Senate's third-ranking Republican. He ran as a candidate for the 2012 Republican Party p... residential nomination, finishing second to the eventual Republican nominee Mitt Romney.Born in Virginia, Santorum was raised primarily in Butler, Pennsylvania. He obtained an undergraduate degree from Pennsylvania State University, an M.B.A. From the University of Pittsburgh, and a J.D. From the Dickinson School of Law. Santorum worked as an attorney at Kirkpatrick & Lockhart, where he met Karen Garver. They married in 1990, and have seven living children. Santorum was elected to the U.S. House of Representatives to represent Pennsylvania's 18th congressional district in 1990 and later became a member of a group dubbed the "Gang of Seven".Santorum was elected as a United States Senator for Pennsylvania in 1994. He served two terms until losing his re-election bid in 2006. A devout, practicing Catholic, Santorum is a social conservative who opposes same-sex marriage and artificial birth control   more
0 votes
0 comments
Rick Santorum - Voter Comments
No Comments
Vote & Comment
Leave a comment...
(Maximum 900 words)

imabench says2015-06-16T22:25:36.6743299-05:00
Report Post
Youd have to be crazy and disconnected from reality to think Carson is going to win the nomination. Rubio has a decent shot and is moderate enough to lead the GOP more towards the center where the undecided voters are, which the GOP will have to swoon if they want to beat Hillary. Santorum and Carson are way too far to the right to lure independent voters their way, and neither of them are even polling in the top half of all candidates running. Rubio already has a good shot, and if he picked Rand, Chris Christie, or another moderate republican as his VP, he would have a decent shot at beating Hillary. Carson and Santorum on the other hand dont have a chance, and even if they do pull off the nomination, they would be handing the presidency to Hillary on a silver platter