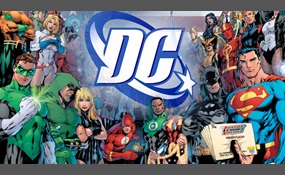 Who is the best DC superhero in the choices offered?

Diana Prince is a fictional character appearing regularly in stories published by DC Comics, as secret identity of the Amazonian superheroine Wonder Woman, who bought the credentials and identity from an Army nurse named Diana Prince who went to Sou... th America and married her fiance to become Diana White. The character debuted in Sensation Comics #1 and was created by Charles Moulton and H. G. Peter.The fictional career of Diana Prince evolved over the years, from the original Army nurse to becoming a military intelligence officer, then later a civilian employee, businesswoman, astronaut, or staff member at the United Nations, etc. In the TV series Wonder Woman, she was a WAVES yeoman in the 1940s. Although originally possessing the powers of Wonder Woman at all times, Diana Prince later lost the powers when in her secret identity, and during the 1960s, Wonder Woman lost her powers and functioned only as a non-powered Diana Prince in other adventures   more
3 votes
0 comments
Wonder Woman - Voter Comments
No Comments
Vote & Comment
3

Jay-D says2015-06-23T01:57:16.1679874-05:00
Report Post
Personal favourite. In a neutral environment, uninfluenced by deus ex machina (that means bye-bye, Batman!), almost no superhero can beat Superman. Also, he's the perfect superhero, and the single most important thing to happen to the entire genre. Last, but not the least, Bob Kane had the opportunity to create Batman only because of the success of Superman.
Vote & Comment
No comments yet.
Leave a comment...
(Maximum 900 words)
Privacy Policy | Terms of Use
Sitemap | View Desktop Version
©2020 Debate.org. All rights reserved.