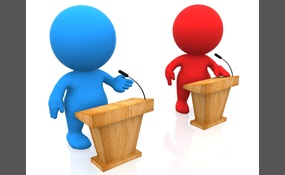 Who is the best modern debater

Feel free to add your own answers, preferably not based off presidential/ prime ministerial debates. (also put what the debate topic was)

Krampus says2015-05-04T12:08:07.6116434-05:00
Report Post
Stands his ground, remaining true to his beliefs, and doesn't pull punches. He always remains calm, logical, and doesn't resort to personal insults like so many people do now. His most famous debate was with Piers Morgan regarding gun control.

chrislailc says2019-03-27T07:38:35.8109407Z
Report Post
Very objective, Speaks in facts and most importantly, Never loses his cool depsite getting a lot of hate for his views. Respect. I went from a liberal to a conservative because of him.

henry.kawa says2019-10-06T08:42:16.5337307Z
Report Post
Why would anyone not agree with Ben Shapiro, When everything he says is one hundred percent backed up by scientific evidence which cannot be disputed.

Christopher Eric Hitchens was a British American author, philosopher, polemicist, debater, and journalist. He contributed to New Statesman, The Nation, The Atlantic, The London Review of Books, The Times Literary Supplement and Vanity Fair. Hitchens...  was the author, co-author, editor and co-editor of over thirty books, including five collections of essays, and concentrated on a range of subjects, including politics, literature and religion. A staple of talk shows and lecture circuits, his confrontational style of debate made him both a lauded and controversial figure. Known for his contrarian stance on a number of issues, Hitchens excoriated such public figures as Mother Teresa, Bill Clinton, Henry Kissinger, Diana, Princess of Wales, and Pope Benedict XVI. He was the elder brother of author Peter Hitchens   more
8 votes
1 comment
Christopher Hitchens (Iraq war pro, religion against) - Voter Comments

Dinesh Joseph D'Souza is an Indian-American political commentator, filmmaker, and author. D'Souza is affiliated with a number of conservative organizations and publications, including the American Enterprise Institute, the Heritage Foundation, the H... oover Institution, and Policy Review. He also served as a policy adviser to President Ronald Reagan and, during 2010–2012, as president of The King's College, a small Christian school in New York City.Born in Bombay, D'Souza came to the United States as an exchange student, graduating from Dartmouth College. He became a naturalized citizen in 1991. He is the author of several New York Times best-selling books, including on Christian apologetics, such as What's So Great About Christianity and Life After Death: The Evidence. D'Souza has also been a critic of "New Atheism". In 2012, D'Souza released 2016: Obama's America, a documentary film based on his 2010 book The Roots of Obama's Rage. Both posit that Barack Obama's attitude toward America derives from his father's anti-colonialism and from a psychological desire to fulfill his father's dream of diminishing the power of Western imperial states   more
2 votes
0 comments
Dinesh D'Souza (christianity pro) - Voter Comments
No Comments
Vote & Comment
4

Samuel B. "Sam" Harris is an American author, philosopher, and neuroscientist. He is the co-founder and chief executive of Project Reason. He is the author of The End of Faith, which was published in 2004 and appeared on The New York Times Best Sell... er list for 33 weeks. The book also won the PEN/Martha Albrand Award for First Nonfiction in 2005. In 2006, Harris published the book Letter to a Christian Nation as a response to criticism of The End of Faith. This work was followed by The Moral Landscape, published in 2010, his long-form essay Lying in 2011, the short book Free Will in 2012, and Waking Up: A Guide to Spirituality Without Religion in 2014.Harris is a contemporary critic of religion and proponent of scientific skepticism and the "New Atheism". He is also an advocate for the separation of church and state, freedom of religion, and the liberty to criticize religion. Harris has written numerous articles for The Huffington Post, Los Angeles Times, The Washington Post, The New York Times, Newsweek, and the journal Nature. His articles touch upon a diversity of topics including religion, morality, neuroscience, free will, terrorism, and self-defense   more
2 votes
0 comments
Sam Harris (religion against) - Voter Comments
No Comments
Vote & Comment
5

Russell Edward Brand is an English comedian, actor, radio host, author, and activist.In 2004, Brand achieved notoriety as the host of Big Brother's Big Mouth, a Big Brother spin-off. In 2007, he had his first major film role in St Trinian's. In 2008... , he had a major role in Forgetting Sarah Marshall; the film led to him starring in the sequel Get Him to the Greek in 2010. He also worked as a voice actor in the animated films Despicable Me in 2010, Hop in 2011, and Despicable Me 2 in 2013. He played the title character of the 2011 remake Arthur.Brand has received media coverage for controversies such as his dismissal from MTV, his behaviour as a presenter at various award ceremonies, and his drug use. In 2008, he resigned from the BBC following prank calls he made to actor Andrew Sachs on The Russell Brand Show. He has incorporated his drug use, alcoholism, and promiscuity into his comedic material.Since guest editing an edition of the New Statesman, a British weekly magazine, Brand has become known as an activist and campaigner   more
2 votes
0 comments
Russell Brand (everything) - Voter Comments
No Comments
Vote & Comment
7

Marcus Tullius Cicero, was a Roman philosopher, politician, lawyer, orator, political theorist, consul and constitutionalist. He came from a wealthy municipal family of the Roman equestrian order, and is widely considered one of Rome's greatest orat... ors and prose stylists.His influence on the Latin language was so immense that the subsequent history of prose in not only Latin but European languages up to the 19th century was said to be either a reaction against or a return to his style. According to Michael Grant, "the influence of Cicero upon the history of European literature and ideas greatly exceeds that of any other prose writer in any language". Cicero introduced the Romans to the chief schools of Greek philosophy and created a Latin philosophical vocabulary distinguishing himself as a linguist, translator, and philosopher.Petrarch's rediscovery of Cicero's letters is often credited for initiating the 14th-century Renaissance in public affairs, humanism, and classical Roman culture. According to Polish historian Tadeusz Zieliński, "Renaissance was above all things a revival of Cicero, and only after him and through him of the rest of Classical antiquity.   more
2 votes
1 comment
Cicero - Voter Comments

Rafael Edward "Ted" Cruz is the junior United States Senator from Texas. Elected in 2012, he is the first Cuban American or Latino to hold the office of US Senator from Texas. Cruz is a member of the Republican Party. He served as Solicitor General ... of Texas from 2003 to May 2008, after being appointed by Texas Attorney General Greg Abbott. Between 1999 and 2003, Cruz served as the director of the Office of Policy Planning at the Federal Trade Commission, an Associate Deputy Attorney General at the United States Department of Justice, and as Domestic Policy Advisor to U.S. President George W. Bush on the 2000 Bush-Cheney campaign. Cruz was also an Adjunct Professor of Law at the University of Texas School of Law in Austin, where he taught U.S. Supreme Court litigation, from 2004 to 2009.Cruz was the Republican nominee for the Senate seat vacated by fellow Republican Kay Bailey Hutchison. On July 31, 2012, he defeated Lieutenant Governor David Dewhurst in the Republican primary runoff, 57–43. Cruz defeated the Democrat, former state Representative Paul Sadler, in the general election held on November 6, 2012; he prevailed with 56–41 over Sadler   more
1 vote
0 comments
Ted Cruz ( varied political issues such as gun control) - Voter Comments
No Comments
Vote & Comment
9

Reza Aslan is an Iranian-American writer, scholar of religious studies and a professor of creative writing at the University of California, Riverside. He is a member of American Academy of Religion.His books include the international bestseller No g... od but God: The Origins, Evolution, and Future of Islam, which has been translated into 13 languages, and Zealot: The Life and Times of Jesus of Nazareth, which offers an interpretation of the life and mission of the historical Jesus   more
1 vote
0 comments
Reza Aslan (Islam pro) - Voter Comments
No Comments
Vote & Comment
10

Anthony Charles Lynton Blair is a British Labour Party politician and former Prime Minister of the United Kingdom from 1997 to 2007. He now runs a consultancy business and performs charitable work. Blair was the Member of Parliament for Sedgefield f... rom 1983 to 2007 and Leader of the Labour Party from 1994 to 2007. Blair led Labour to a landslide victory in the 1997 general election, winning 418 seats, the most the party has ever held. The party went on to win two more elections under his leadership: in 2001, in which it won another landslide victory, and in 2005, with a reduced majority.Blair was elected Labour Party leader in the leadership election of July 1994, following the sudden death of his predecessor, John Smith. Under his leadership, the party used the phrase "New Labour" to distance it from previous Labour policies. Blair declared opposition to the traditional conception of socialism, and declared support for a new conception that he referred to as "social-ism", involving politics that recognised individuals as socially interdependent, and advocated social justice, cohesion, equal worth of each citizen, and equal opportunity   more
0 votes
0 comments
Tony Blair (religion pro) - Voter Comments
No Comments
Vote & Comment
11

David J. Wolpe is an author, public speaker and rabbi of Sinai Temple in Los Angeles, California. Named the most influential rabbi in America by Newsweek Magazine and one of the 50 most influential Jews in the world by the Jerusalem Post, Wolpe was ... named one of The Forward's 50, and one of the hundred most influential people in Los Angeles by Los Angeles Magazine. Author of seven books and a frequent television guest, Wolpe writes a weekly column in The Jewish Week.Wolpe became the focus of international controversy when he gave a Passover sermon that questioned the historicity of the Exodus from Egypt. Ordained by the Jewish Theological Seminary of America in New York in 1987, Wolpe is a leader in Conservative Judaism   more
0 votes
0 comments
David Wolpe (Judaism pro) - Voter Comments
No Comments
Vote & Comment
12

George Galloway is a British politician, broadcaster, and writer. Since late March 2012 he has been the Respect Party Member of Parliament for Bradford West.After first coming to prominence in Scottish politics, he became General Secretary of the Lo... ndon based charity War on Want in 1983, remaining in the post until 1987. Galloway was first elected in that year's general election as a Labour Party MP representing Glasgow Hillhead. From 1997, Galloway represented its successor constituency Glasgow Kelvin, and remained as the MP for the seat until 2005. In October 2003, Galloway was expelled from Labour having been found guilty of four charges of bringing the party into disrepute.He became a leading member of the Respect Party in 2004, and was elected as the MP for Bethnal Green and Bow at the general election the following year. After unsuccessfully contesting the seat of Poplar and Limehouse in 2010, he returned as a Westminster MP following the Bradford West by-election in March 2012   more
0 votes
0 comments
George Galloway (Iraq war against) - Voter Comments
No Comments
Vote & Comment
13

Peter Jonathan Hitchens is an English journalist and author. He has published six books, including The Abolition of Britain, The Rage Against God and The War We Never Fought. Hitchens writes for Britain's The Mail on Sunday newspaper and is a former...  foreign correspondent in Moscow and Washington. He continues to work as an occasional foreign reporter and in 2010, in recognition of his foreign reporting, he was awarded the Orwell Prize.Hitchens describes himself as a Burkean conservative, and he is a frequent critic of political correctness. He is the younger brother of the late writer Christopher Hitchens   more
0 votes
0 comments
Peter Hitchens (drug decriminalisation against, christianity pro, homosexuality against) - Voter Comments
No Comments
Vote & Comment
14