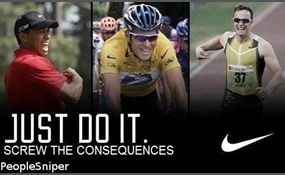 Who is the best Nike promotional athlete?

And by best I mean well you know.

Eldrick Tont "Tiger" Woods is an American professional golfer who is among the most successful golfers of all time. Formerly World No. 1, he has been one of the highest-paid athletes in the world for several years.Woods turned professional in 1996, ... and by April 1997 he had already won his first major, the 1997 Masters in a record-breaking performance, winning the tournament by 12 strokes and pocketing $486,000. He first reached the number one position in the world rankings in June 1997. Through the 2000s, Woods was the dominant force in golf, spending 264 weeks from August 1999 to September 2004 and 281 weeks from June 2005 to October 2010 as world number one. From December 2009 to early April 2010, Woods took leave from professional golf to focus on his marriage after he admitted infidelity. His many extra-marital indescretions were revealed by several different women, through many worldwide media sources. This was followed by a loss of golf form, and his ranking gradually fell to a low of No. 58 in November 2011. He ended a career-long winless streak of 107 weeks when he captured the Chevron World Challenge in December 2011   more
3 votes
1 comment
Tiger Woods - Voter Comments

Oscar Leonard Carl Pistorius is a South African sprint runner. Although both of Pistorius' legs were amputated below the knee when he was 11 months old, he competes in events for single below-knee amputees and for able-bodied athletes.After becoming...  a Paralympics champion, Pistorius attempted to enter able-bodied international competition, over persistent objections of the IAAF and charges that his artificial limbs gave an unfair advantage. Pistorius eventually prevailed in this legal dispute. At the 2011 World Championships in Athletics, Pistorius became the first amputee to win an able-bodied world track medal. At the 2012 Summer Olympics, Pistorius became the first double leg amputee to participate in the Olympics when he entered the men's 400 metres and 4 × 400 metres relay races. At the 2012 Summer Paralympics, Pistorius won gold medals in the men's 400-metre race and in the 4 × 100 metres relay, setting world records in both events. He also took a silver in the 200 metres race, having set a world record in the semifinal   more
1 vote
1 comment
Oscar Pistorius - Voter Comments

Cristiano Ronaldo dos Santos Aveiro, OIH, known as Cristiano Ronaldo, is a Portuguese footballer who plays as a forward for Spanish club Real Madrid and captains the Portugal national team.Ronaldo became the world's most expensive player when he mov... ed from Manchester United to Real Madrid in 2009 in a transfer worth £80 million. Ronaldo's contract with Real Madrid, under the terms of which he is paid €21 million per year, makes him the highest-paid footballer in the world, and his buyout clause is valued at €1 billion. He is regarded by some in the sport to be currently the best player in the world, and one of the greatest of all time.Ronaldo began his career as a youth player for Andorinha, where he played for two years, before moving to C.D. Nacional. In 1997, he made a move to Portuguese giants Sporting CP. In 2003 he caught the attention of Manchester United manager Alex Ferguson, who signed him for £12.2 million. In 2004, he won his first trophy, the FA Cup.In 2007, Ronaldo was the first player in England to win all four main PFA and FWA awards   more
1 vote
0 comments
Cristiano Ronaldo - Voter Comments
No Comments
Vote & Comment
5

Lance Edward Armstrong is an American former professional road racing cyclist. Armstrong had won the Tour de France a record seven consecutive times between 1999 and 2005 before he was disqualified from all those races and banned from competitive cy... cling for life, for doping offenses by the Union Cycliste Internationale in 2012, after the United States Anti-Doping Agency presented its findings. A cancer survivor, he is the founder of the Livestrong Foundation, originally called the Lance Armstrong Foundation, which provides support for cancer patients.At age 16, Armstrong began competing as a triathlete and was a national sprint-course triathlon champion in 1989 and 1990. In 1992, Armstrong began his career as a professional cyclist with the Motorola team. He had notable success between 1993 and 1996, including the World Championship in 1993, Clásica de San Sebastián in 95, Tour DuPont in 95 and 96, and a handful of stage victories in Europe, including stage 18 of the 1995 Tour de France.In October 1996, he was diagnosed with testicular cancer that had spread to his brain, lungs and abdomen. His cancer treatments included brain and testicular surgery and extensive chemotherapy   more
0 votes
0 comments
Lance Armstrong - Voter Comments
No Comments
Vote & Comment
Leave a comment...
(Maximum 900 words)