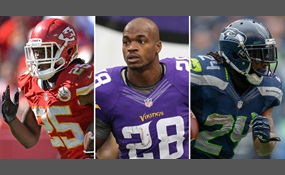 Who is the best running back in NFL history?

Barry Sanders is a former American football running back who spent his entire professional career with the Detroit Lions of the National Football League. A member of both the college and professional football halls of fame, he was ranked by NFL Top ... 10 as the most elusive runner in NFL history, and also topped their list of greatest players never to reach the Super Bowl. Averaging over 1,500 rushing yards per season, Sanders left the game just 1,457 yards short of being first place on the list for the NFL all-time rushing record at that time   more
4 votes
1 comment
Barry Sanders - Voter Comments

Walter Jerry Payton was an American football running back who played for the Chicago Bears of the National Football League for thirteen seasons. Walter Payton was known around the NFL as "Sweetness". He is remembered as one of the most prolific runn... ing backs in the history of the NFL. Payton, a nine-time Pro Bowl selectee, once held the league's record for most career rushing yards, touchdowns, carries, yards from scrimmage, all-purpose yards, and many other categories. His eight career touchdown passes are an NFL record for non-quarterbacks. He was elected into the Pro Football Hall of Fame in 1993. Hall of Fame NFL player and coach Mike Ditka described Payton as the greatest football player he had ever seen—but even greater as a human being.Payton began his football career in Mississippi, and went on to have an outstanding collegiate football career at Jackson State University where he was an All-American. He started his professional career with the Chicago Bears in 1975, who selected him as the 1975 Draft's fourth overall pick. Payton proceeded to win two NFL Most Valuable Player Awards and won Super Bowl XX with the 1985 Chicago Bears   more
1 vote
1 comment
Walter Payton - Voter Comments

James Nathaniel "Jim" Brown is an American former professional football player and actor. He is best known for his exceptional and record-setting nine-year career as a running back for the NFL Cleveland Browns from 1957 to 1965. In 2002, he was name... d by Sporting News as the greatest professional football player ever. He is widely considered to be one of the greatest professional athletes in the history of the United States   more
0 votes
0 comments
Jim Brown - Voter Comments
No Comments
Vote & Comment
4

LaDainian Tramayne Tomlinson is a former American college and professional football player who was a running back in the National Football League for eleven seasons. He played the majority of his 11-year career with the San Diego Chargers, who selec... ted him with the fifth overall pick in the 2001 NFL Draft. Tomlinson was selected to five Pro Bowls, was an All-Pro six times, and won two rushing titles. At the time of his retirement, he ranked fifth in career rushing yards, seventh in all-purpose yards, second in career rushing touchdowns, and third in total touchdowns. He currently serves as an analyst on NFL Network.Tomlinson played college football for Texas Christian University, earned consensus All-American honors, and was recognized as the best college running back. He spent nine seasons with the Chargers. During the 2006 NFL season, he set several NFL touchdown scoring records and received numerous honors and awards including the NFL's Most Valuable Player Award and the Associated Press's Offensive Player of the Year Award. In 2010, he signed as a free agent with the New York Jets, playing for two seasons before retiring after 2011   more
0 votes
0 comments
LaDainian Tomlinson - Voter Comments
No Comments
Vote & Comment
5

Adrian Lewis Peterson is an American football running back for the Minnesota Vikings of the National Football League. He was drafted by the Vikings seventh overall in the 2007 NFL Draft. He played college football at Oklahoma. Peterson set the NCAA ... freshman rushing record with 1,925 yards as a true freshman during the 2004 season. As a unanimous first-team All-American, he became the first freshman to finish as the runner-up in the Heisman Trophy balloting. Peterson finished his college football career as the Sooners' third all-time leading rusher.Following his first pro season, in which he set an NFL record for most rushing yards in a single game, Peterson was named the NFL Offensive Rookie of the Year. He was then awarded the MVP award for his performance in the Pro Bowl and became only the fifth player in NFL history to have more than 3,000 yards through his first two seasons. In 2010, he became the fifth fastest player to run for 5,000 yards, doing so in his 51st game.In 2012, Peterson became the sixth fastest player to reach 8,000 rushing yards, ending the season with 2,097 rushing yards, just nine yards shy of breaking Eric Dickerson's single season all-time record   more
0 votes
0 comments
Adrian Peterson - Voter Comments
No Comments
Vote & Comment
No comments yet.
Leave a comment...
(Maximum 900 words)
Privacy Policy | Terms of Use
Sitemap | View Desktop Version
©2020 Debate.org. All rights reserved.