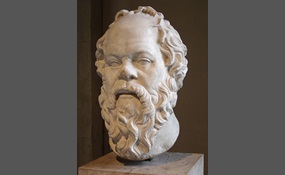 Who is the Better Philoshoper

Socrates was a classical Greek philosopher credited as one of the founders of Western philosophy. He is an enigmatic figure known chiefly through the accounts of classical writers, especially the writings of his students Plato and Xenophon and the p... lays of his contemporary Aristophanes. Plato's dialogues are among the most comprehensive accounts of Socrates to survive from antiquity, though it is unclear the degree to which Socrates himself is "hidden behind his 'best disciple', Plato".Through his portrayal in Plato's dialogues, Socrates has become renowned for his contribution to the field of ethics, and it is this Platonic Socrates who lends his name to the concepts of Socratic irony and the Socratic method, or elenchus. The latter remains a commonly used tool in a wide range of discussions, and is a type of pedagogy in which a series of questions is asked not only to draw individual answers, but also to encourage fundamental insight into the issue at hand. Plato's Socrates also made important and lasting contributions to the field of epistemology, and the influence of his ideas and approach remains a strong foundation for much western philosophy that followed   more
5 votes
0 comments
Socrates - Voter Comments
No Comments
Vote & Comment
2

Confucius was a Chinese teacher, editor, politician, and philosopher of the Spring and Autumn period of Chinese history.The philosophy of Confucius emphasized personal and governmental morality, correctness of social relationships, justice and since... rity. His followers competed successfully with many other schools during the Hundred Schools of Thought era only to be suppressed in favor of the Legalists during the Qin Dynasty. Following the victory of Han over Chu after the collapse of Qin, Confucius's thoughts received official sanction and were further developed into a system known as Confucianism.Confucius is traditionally credited with having authored or edited many of the Chinese classic texts including all of the Five Classics, but modern scholars are cautious of attributing specific assertions to Confucius himself. Aphorisms concerning his teachings were compiled in the Analects, but only many years after his death.Confucius's principles had a basis in common Chinese tradition and belief. He championed strong family loyalty, ancestor worship, respect of elders by their children and of husbands by their wives. He also recommended family as a basis for ideal government   more
5 votes
0 comments
Confucius - Voter Comments
No Comments
Vote & Comment
3

Friedrich Wilhelm Nietzsche was a German philologist, philosopher, cultural critic, poet and composer. He wrote several critical texts on religion, morality, contemporary culture, philosophy and science, displaying a fondness for metaphor, irony and...  aphorism.Nietzsche's key ideas include perspectivism, the Will to Power, the "death of God", the Übermensch and eternal recurrence. One of the key tenets of his philosophy is the concept of "life-affirmation," which embraces the realities of the world in which we live over the idea of a world beyond. It further champions the creative powers of the individual to strive beyond social, cultural, and moral contexts. Nietzsche's attitude towards religion and morality was marked with atheism, psychologism and historism; he considered them to be human creations loaded with the error of confusing cause and effect. His radical questioning of the value and objectivity of truth has been the focus of extensive commentary, and his influence remains substantial, particularly in the continental philosophical schools of existentialism, postmodernism, and post-structuralism   more
3 votes
0 comments
Friedrich Nietzsche - Voter Comments
No Comments
Vote & Comment
4

Aristotle was a Greek philosopher and scientist born in the Macedonian city of Stagirus, in 384 BCE. His father, Nicomachus, died when Aristotle was a child, whereafter Proxenus of Atarneus became his guardian. At eighteen, he joined Plato's Academy...  in Athens and remained there until the age of thirty-seven. His writings cover many subjects – including physics, biology, zoology, metaphysics, logic, ethics, aesthetics, poetry, theater, music, rhetoric, linguistics, politics and government – and constitute the first comprehensive system of Western philosophy. Shortly after Plato died, Aristotle left Athens and, at the request of Philip of Macedon, tutored Alexander the Great between 356 and 323 BCE. According to the Encyclopædia Britannica, "Aristotle was the first genuine scientist in history ... [and] every scientist is in his debt."Teaching Alexander the Great gave Aristotle many opportunities and an abundance of supplies. He established a library in the Lyceum which aided in the production of many of his hundreds of books   more
2 votes
1 comment
Aristotle - Voter Comments

Gautama Buddha, also known as Siddhārtha Gautama, Shakyamuni, or simply the Buddha, was a sage on whose teachings Buddhism was founded. He is believed to have lived and taught mostly in eastern India sometime between the sixth and fourth centuries B... CE. The word Buddha means "awakened one" or "the enlightened one". "Buddha" is also used as a title for the first awakened being in an era. In most Buddhist traditions, Siddhartha Gautama is regarded as the Supreme Buddha of our age. Gautama taught a Middle Way between sensual indulgence and the severe asceticism found in the Sramana movement common in his region. He later taught throughout regions of eastern India such as Magadha and Kośala   more
2 votes
0 comments
Gautama Buddha - Voter Comments
No Comments
Vote & Comment
7

Plato was a philosopher, as well as mathematician, in Classical Greece, and an influential figure in philosophy, central in Western philosophy. He was Socrates' student, and founded the Academy in Athens, the first institution of higher learning in ... the Western world. Along with Socrates and his most famous student, Aristotle, Plato helped to lay the foundations of Western philosophy and science. Alfred North Whitehead once noted: "the safest general characterization of the European philosophical tradition is that it consists of a series of footnotes to Plato."Plato's dialogues have been used to teach a range of subjects, including philosophy, logic, ethics, rhetoric, religion and mathematics. His theory of Forms began a unique perspective on abstract objects, and led to a school of thought called Platonism. Plato's writings have been published in several fashions; this has led to several conventions regarding the naming and referencing of Plato's texts   more
1 vote
0 comments
Plato - Voter Comments
No Comments
Vote & Comment
Leave a comment...
(Maximum 900 words)