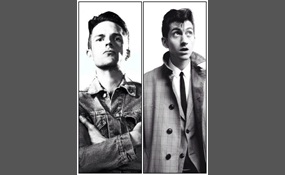 Who is the better vocalist?

Alexander David "Alex" Turner is an English musician, singer, and songwriter. He is the lead vocalist, guitarist, and principal songwriter of the English rock band Arctic Monkeys. Turner has also recorded with a side-project called The Last Shadow P... uppets and as a solo artist. He also wrote and performed songs for the soundtrack of the 2010 comedy-drama film Submarine.Turner has a baritone vocal range   more
4 votes
1 comment
Alex Turner - Voter Comments

grannyannay says2016-02-04T19:46:17.1514104Z
Report Post
Alex Turner's voice is (pardon the opinion) the best thing ever and should not even be questioned whether or not someone is better than him. If you listen to the acoustic one take versions of songs live, he is really good and knows how to sing, that's for sure. In some of the Last Shadow Puppet's songs he hits notes that are so good you can't put it into words.
Vote & Comment
2

Brandon Richard Flowers is an American musician, singer, songwriter and lyricist. He is best known as the frontman of the Las Vegas-based rock band The Killers. In 2010, Flowers released a solo album, titled Flamingo. He has topped the UK Albums Cha... rt five times, including work by The Killers and is a recipient of the Q Idol Award   more
3 votes
0 comments
Brandon Flowers - Voter Comments
No Comments
Vote & Comment
Leave a comment...
(Maximum 900 words)