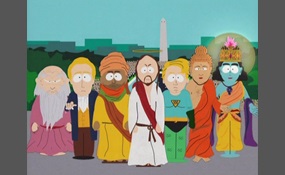 Who is the most influential religious figure?

Which religious figure has been the most influential throughout the course of human history?

Donte says2013-12-04T01:45:54.2465375-06:00
Report Post
Not even close....Jesus was by far the most influential figure of all time....his message spread far and wide from a small area to blanket the World. Not to mention Humanity's History and future are and will continue to be identified by BC and AD ..before Christ and after death...enough said

bobbyheem says2015-03-08T15:26:35.8608473-05:00
Report Post
I would have to say Jesus, through out my live I've seen Jesus every where. Now that I'm much older I have realized that a child will know of Santa Claus before he or she even understands about Jesus. Maybe Santa is Satan?

Moses was, according to the Hebrew Bible, the Qur'an, and Baha'i scripture, a religious leader, lawgiver, and prophet, to whom the authorship of the Torah is traditionally attributed. Also called Moshe Rabbenu in Hebrew, he is the most important pro... phet in Judaism; he is also an important prophet in Christianity and Islam, as well as a number of other faiths.The existence of Moses as well as the veracity of the Exodus story are disputed amongst archaeologists and Egyptologists, with experts in the field of biblical criticism citing logical inconsistencies, new archaeological evidence, historical evidence, and related origin myths in Canaanite culture. Other historians maintain that the biographical details and Egyptian background attributed to Moses imply the existence of an historical political and religious leader who was involved in the consolidation of the Hebrew tribes in Canaan towards the end of the Bronze Age.According to the Book of Exodus, Moses was born in a time when his people, the Children of Israel, were increasing in numbers and the Egyptian Pharaoh was worried that they might help Egypt's enemies. Moses' Hebrew mother, Jochebed, hid him when the Pharaoh ordered all newborn Hebrew boys to be killed, and the child was adopted as a foundling by the Egyptian royal family. After killing an Egyptian slavemaster, Moses fled across the Red Sea to Midian, where he encountered the God of Israel in the form of a "burning bush"   more
3 votes
0 comments
Moses - Voter Comments
No Comments
Vote & Comment
4

Joseph Smith, Jr. Was an American religious leader and the founder of the Latter Day Saint movement, the predominant branch of which is Mormonism. At age twenty-four, Smith published the Book of Mormon, and in the next fourteen years he attracted th... ousands of followers, established cities and temples, and created a lasting religious culture.Smith was born in Sharon, Vermont, and by 1817 had moved with his family to an area in western New York later called the burned-over district because it was repeatedly swept by religious revivals during the Second Great Awakening. The Smith family was not united in their religious views, but they believed in visions and prophecies, and participated in folk religious practices typical of the era. According to Smith, beginning in the early 1820s he had visions, in the first of which "two personages" appeared to him to usher in a new dispensation of the gospel. Subsequently, in another vision of an angel, Smith said he was directed to a buried book of golden plates inscribed with a Judeo-Christian history of an ancient American civilization. In 1830, he published what he said was an English translation of these plates as the Book of Mormon and organized the Church of Christ as a restoration of the early Christian church. Church members were later called Latter Day Saints, or Mormons   more
1 vote
1 comment
Joseph Smith, Jr. - Voter Comments

Mary Baker Eddy was the founder of Christian Science, a new religious movement that emerged in New England in the late 19th century. Eddy is the author of the movement's textbook, Science and Health with Key to the Scriptures, and founder of the Chu... rch of Christ, Scientist. She also founded the Christian Science Publishing Society, which continues to publish a number of periodicals, including The Christian Science Monitor.Married three times and widowed twice, once as a young woman and once in her sixties, she took the name Mary Baker Glover from her first marriage. She was also known from her third marriage as Mary Baker Glover Eddy and Mary Baker G. Eddy   more
0 votes
0 comments
Mary Baker Eddy - Voter Comments
No Comments
Vote & Comment
No comments yet.
Leave a comment...
(Maximum 900 words)
Privacy Policy | Terms of Use
Sitemap | View Desktop Version
©2021 Debate.org. All rights reserved.