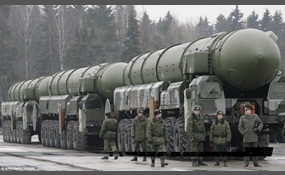 Who is the strongest country

I am wondering who is the stongest country.

STALIN says2014-08-12T20:26:03.8084795-05:00
Report Post
Probably considered to be the most powerful, but those brainwashed Americans who believe the US could defeat all the other countries in the world combined are complete idiots.

Scotland is a country that is part of the United Kingdom. Occupying the northern third of the island of Great Britain, Scotland shares a border with England to the south, and is otherwise surrounded by the Atlantic Ocean; with the North Sea to the e... ast, and the North Channel and Irish Sea to the south-west. In addition to the mainland, the country is made up of more than 790 islands, including the Northern Isles and the Hebrides. Edinburgh, the country's capital and second-largest city, was the hub of the Scottish Enlightenment of the 18th century, which transformed Scotland into one of the commercial, intellectual, and industrial powerhouses of Europe. Glasgow, Scotland's largest city, was once one of the world's leading industrial cities and now lies at the centre of the Greater Glasgow conurbation. Scottish waters consist of a large sector of the North Atlantic and the North Sea, containing the largest oil reserves in the European Union. This has given Aberdeen, the third-largest city in Scotland, the title of Europe's oil capital. The Kingdom of Scotland emerged as an independent sovereign state in the Early Middle Ages and continued to exist until 1707   more
1 vote
0 comments
Scotland - Voter Comments
No Comments
Vote & Comment
10

Poland, officially the Republic of Poland, is a country in Central Europe bordered by Germany to the west; the Czech Republic and Slovakia to the south; Ukraine and Belarus to the east; and the Baltic Sea, Kaliningrad Oblast and Lithuania to the nor... th. The total area of Poland is 312,679 square kilometres, making it the 71st largest country in the world and the 9th largest in Europe. With a population of over 38.5 million people, Poland is the 34th most populous country in the world, the sixth most populous member of the European Union, and the most populous post-communist member of the European Union. Poland is a unitary state divided into 16 administrative subdivisions.Many historians trace the establishment of a Polish state to 966, when Mieszko I, ruler of a territory roughly coextensive with that of present-day Poland, converted to Christianity. The Kingdom of Poland was founded in 1025, and in 1569 it cemented a longstanding political association with the Grand Duchy of Lithuania by signing the Union of Lublin, forming the Polish–Lithuanian Commonwealth   more
1 vote
0 comments
Poland - Voter Comments
No Comments
Vote & Comment
11

The Imperium of Man

The Imperium of Man is a galaxy-spanning interstellar human empire, the ultimate authority for the majority of the human race in the Milky Way Galaxy in the 41st Millennium AD. It is ruled by the living God who is known as the Emperor of Mankind. Ho... wever, there are other humanoid species classified as Imperial citizens, mainly mutant offshoots of genetic base-line humans who are known as Abhumans and include such human sub-races as the Ogryns, Ratlings and Squats. The founder and ruler of the Imperium is the god-like Emperor of Mankind, the most powerful human psyker ever born. The Emperor founded the Imperium over 10,000 Terran years ago in the late 30th Millennium during the Unification Wars on Old Earth following the terrible period in human history known as the Age of Strife. The Emperor continues, at least nominally, to rule the Imperium as both its political master and its primary religious figure, though His badly damaged body is interred within the cybernetic life support mechanisms of the arcane device known as the Golden Throne following His mortal wounding during the interstellar civil war known as the Horus Heresy. Because of this terrible fate, the Emperor is incapable of interacting with others on a day-to-day basis and has left the basic governance of His Imperium to the Senatorum Imperialis, an oligarchic ruling council of the most powerful lords and Adepts in the galaxy. The Imperium of Man is a war-torn empire, teetering on the brink of collapse. For 10,000 Terran years it has been ruled by the deathless Emperor, a being of almost limitless psychic power, to whom thousands of souls are sacrificed daily. The peoples of the Imperium live in a place where daemons are real, mutation is frequent and death is a constant companion. To be alive in the late 41st Millennium is to know that the universe is a terrifying and hostile place. It is a place where you are but one amongst billions and, no matter how heroic your death, you will not be missed. A truly vast domain, the Imperium is spread amongst the many stars of the galaxy. Its territories encompass untold millions of stars and countless more human lives. In its name, terrible wars are fought and desperate sacrifices made, yet even this river of carnage and blood is a small price to pay, for the Imperium is the guardian of Mankind. Were it to pass into nothingness, so too would the human race, destroyed by enemies uncountable, to the braying laughter of the Dark Gods. The Imperium is the largest and currently most powerful political entity in the galaxy, consisting of at least 1,000,000 human-settled worlds dispersed across most of the Milky Way Galaxy. Consequently, an Imperial planet might be separated from its closest neighbour by hundreds or even thousands of light years. As a stellar empire, the size of the Imperium cannot be measured in terms of contiguous territory, but only in the number of planetary systems under its control. However, most humans in the galaxy have little day-to-day contact with the government of the Imperium unless they serve in one of its Adepta or run afoul of its various protectors, such as the Inquisition or the Adeptus Arbites. The Imperium is primarily an interstellar tribute empire, allowing its member worlds to largely govern themselves as long as they recognise the authority of the Emperor and His servants and support the state religion, the Imperial Cult, which holds the Emperor to be the one, true God of Mankind. Every world of the Imperium must also pay the Imperial taxes levied on them in the form of men and materiel that is known as the Imperial tithe. These resources go to the service of the Imperial Guard and the Imperial Navy, the armed forces which keep the Imperium united and safe. The Imperial tithe supports the overall economy of the Imperium by redistributing resources where needed, usually to shore up one region of the Imperium where conflict is raging by drawing resources from more peaceful sectors. In general, the Imperium promotes the development of a neo-feudal political system, which the High Lords of Terra and the Inquisition have long believed to be the most stable form of human government. There are few human-settled worlds in the galaxy where any but the most wealthy nobles have any say in the government of their planet, and the Imperial establishment generally characterises any movements toward "democracy", self-rule or the overthrow of the neo-feudal system as outright heresy against the divine plan of the God-Emperor. This intense need for political stability and the growing military demands upon the Imperial system presented by the myriad and growing threats of the 41st Millennium have created a repressive and stagnant galactic government. In the present Imperium, science and human progress have essentially been halted in service to the need to simply maintain the crumbling status quo. It is not for nothing that many Imperial savants consider the current age the "Time of Ending" for Mankind. Several alien species and dark forces (the Forces of Chaos, the Tyranids, the Eldar, the Dark Eldar, the Orks, the Tau, and the Necrons) increasingly challenge the supremacy of the Imperium and humanity's predominant place in the galaxy. From within its own creaking and increasingly stagnant and repressive edifice, the Imperium is threatened more insidiously by rebellion, mutation, dangerous psykers and subversive Chaos Cults. However, despite its myriad problems, without the admittedly authoritarian and often harsh protection of the Imperium, Mankind as a whole would have fallen prey to the countless perils that threaten it. Without the Imperium of Man and Mankind's faith in the Emperor who guides it, the human race would have become extinct long ago   more
1 vote
1 comment
The Imperium of Man - Voter Comments

Saudi Arabia, officially known as the Kingdom of Saudi Arabia, is the largest Arab state in Western Asia by land area and the second-largest in the Arab world after Algeria. It is bordered by Jordan and Iraq to the north, Kuwait to the northeast, Qa... tar, Bahrain and the United Arab Emirates to the east, Oman to the southeast, and Yemen in the south. It is the only nation with both a Red Sea coast and a Persian Gulf coast.Before the inception of the Kingdom of Saudi Arabia, modern-day Saudi Arabia consisted of four distinct regions: Hejaz, Najd and parts of Eastern Arabia and Southern Arabia. The Kingdom of Saudi Arabia was founded in 1932 by Ibn Saud; he united the four regions into a single state through a series of conquests beginning in 1902 with the capture of Riyadh, the ancestral home of his family, the House of Saud. The country has since been an absolute monarchy governed along Islamic lines, namely under the influence of Wahhabism. Saudi Arabia is sometimes called "the Land of the Two Holy Mosques" in reference to Al-Masjid al-Haram, and Al-Masjid an-Nabawi, the two holiest places in Islam   more
0 votes
0 comments
Saudi Arabia - Voter Comments
No Comments
Vote & Comment
Leave a comment...
(Maximum 900 words)

PetersSmith says2014-08-12T20:36:30.2392598-05:00
Report Post
STALIN: They all graduated top of their class in the SAS, and they've been involved in numerous secret raids on Al-Qaeda, and I have over 300 confirmed kills. They are all trained in gorilla warfare and they are all the top snipers in the entire UK armed forces. They have a spy network across the entire world and can track your IP in seconds. They can be anywhere, anytime, and they can kill you in over seven hundred ways. Not only are they all extensively trained in unarmed combat, but they also have access to the entire arsenal of the United States Marine Corps. They also don't drink, sleep, or even eat.

LogicalLunatic says2014-08-12T20:50:54.3878128-05:00
Report Post
That's funny, because a few minutes ago I visited the Sealand website and there was no talk of their "great and powerful" army. It's probably just a bunch of overweight hippies who fish and smoke weed.

patmagsc says2014-10-18T22:56:52.6467341-05:00
Report Post
Strong means a lot of things. Are you asking which have the most fit people, who has the biggest military, who pays their debts(to people, corps, and other countries), who treats people fairly, who has the most manufacturing, who has the largest amount of a specific commodity, who is most trusted, etc?

JarmOlle says2016-02-26T18:31:41.6739665Z
Report Post
Reserves in today strenght includes in every even N:Korea war zone with proffesionel Armed I belive in. No nuclear including in my ranks. N.Korea can invade all land scape in Asia with reserve force if Russia and China trust outside nuclear if N.Korea trying to attacking hole Asia in close future. Yes, Asia have many strong nations in world. 5 or 6 in top ten. Biggest forces is strongest in defence even smaller forces can also. Yes, my list. Sweden are 50th place with 38,150 men.