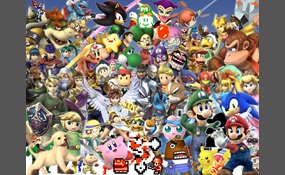 Who is the ultimate main video game character?

Link refers to several different incarnations of the same fictional character and the protagonist of Nintendo's The Legend of Zelda series. Link has been featured in other media from Nintendo, including its merchandising, comic books, and a cartoon ... series.Link is depicted as a child, teenager, or adult of the Hylian race, originating from the fictional land of Hyrule. Link often travels through Hyrule, defeating creatures, evil forces and the series' primary antagonist, Ganon, while attempting to save Princess Zelda and Hyrule. To defeat him, Link usually requires the mystic Master Sword and Light Arrows, or a similar legendary weapon, obtained after many trials and battles, and magical objects or using other items such as musical instruments and weaponry   more
16 votes
2 comments
Link - Voter Comments

The Mario franchise is a media franchise consisting of video games published and produced by Nintendo starring the fictional character, Mario. The franchise also includes other forms of media including several television series and a feature film. I... t was originally created by game designer Shigeru Miyamoto with the arcade Donkey Kong, released on July 9, 1981. The games have been developed by a variety of developers including Nintendo, Hudson Soft, and AlphaDream. Most Mario games have either been released for the arcade or Nintendo video game consoles and handhelds dating from the Nintendo Entertainment System to the current generation of video game consoles.The main series in the franchise is the Super Mario platform series, which mostly follows Mario's adventures in the fictional world of the Mushroom Kingdom. These games typically rely on Mario's jumping ability to allow him to progress through levels. Analysts suggest that by 2012, the Mario franchise will be valued at over $10 billion. The franchise has spawned over 200 games of various genre. The entire franchise, including games such as Super Mario, Mario Kart, Mario Party, Mario Tennis, and Mario Golf, have sold over 856 million copies making it the best-selling video game franchise of all time   more
12 votes
2 comments
Mario - Voter Comments

Cloud Strife is a fictional character and the main protagonist of Square's role-playing video game Final Fantasy VII and several of its sequels and spin-offs. He was originally designed by Final Fantasy VII character designer Tetsuya Nomura. Cloud's...  appearance is marked by spikey blond hair, striking blue eyes, dark clothing and his Buster Sword, which previously belonged to his friend Zack Fair.In Final Fantasy VII, Cloud is a mercenary and self-proclaimed ex-member of SOLDIER, an elite, genetically augmented military unit operating under the de facto world government, the megacorporation Shinra Electric Power Company. Fighting against Shinra in the resistance group AVALANCHE, and driven by a feud with the primary antagonist, Sephiroth, Cloud learns to accept his troubled past and adapts to his role as a leader. Cloud has also appeared in several other titles outside the Final Fantasy VII continuity, such as Itadaki Street Special, Final Fantasy Tactics, Dissidia Final Fantasy, Ehrgeiz and the Kingdom Hearts series.Cloud has garnered a primarily positive reception from critics. Described as "iconic," the character has been ranked highly in various published character lists. He remains popular among fans, and continues to place highly in popularity polls. He has also become the basis for a variety of merchandise, such as action figures and jewellery   more
5 votes
1 comment
Cloud Strife - Voter Comments

Pikachu is a species within the Pokémon games, anime, and manga series. Pikachu are often found within the Pokémon universe in forests, plains, and occasionally near mountains, islands and electrical sources (such as power plants).
4 votes
1 comment
Pikachu - Voter Comments

Kirby is a fictional character in the Kirby video game series by HAL Laboratory and Nintendo, created by Japanese video game designer Masahiro Sakurai. Serving as the eponymous protagonist of the series, Kirby has appeared in more than twenty games ... since his creation in 1992. Kirby, whose appearance is described as a "small pink ball", is a citizen of Dream Land on the planet Pop Star, and possesses the ability to inhale objects and then expel them with great force. Kirby can absorb the properties of swallowed objects to temporally gain new magical powers known as "copy abilities." In the Kirby series of video games, Kirby often battles antagonistic forces including Dark Matter and his nemesis King Dedede.Kirby has inspired an anime series, manga, and a line of licensed merchandise. Since 1999, he has been voiced by Makiko Ohmoto   more
3 votes
0 comments
Kirby - Voter Comments
No Comments
Vote & Comment
7

Mega Man, also spelled Megaman, known as Rockman in Japan, is a title character and the protagonist of the Mega Man series by Capcom. The character was introduced in 1987. Since then, he has become one of the company's primary original characters an... d continues to be one of the video game industry's most recognizable icons. Having appeared on many consoles since the Nintendo Entertainment System, Mega Man has had a wide gaming audience, and his games continue to evolve with the ever-changing hardware demands of modern gaming systems. Mega Man's fictional universe can be divided into seven categories, each featuring different variations and incarnations of a robot boy hero. Although "Mega Man", or "Rockman", is usually the name used to describe only the original Mega Man from the classic series, it can also be used less specifically to describe the Mega Man series of fictional works, or the group of adherently named main characters within.The several spin-off series that have emerged over the past years, each one continuing the Mega Man mythos in some unique way, includes but is not limited to the Mega Man X, Mega Man Legends, Mega Man Battle Network, and Mega Man Star Force series. A resulting animated series was also produced originally in Japan as well as a number of toys, comics, and collectables available both in and outside of Japan   more
3 votes
1 comment
Mega Man - Voter Comments

Schizoidmouse says2014-11-24T00:33:55.0237724-06:00
Report Post
Mega Man is an icon just the same as Mario and helped lead the same era of gaming. The Blue Bomber has been in numerous games, with numerous bouts against Doctor Wily, not to mention an amazing companion in Rush. What's there not to love about this jump and shot sidescrolling icon?
Vote & Comment
8

Fox McCloud is an anthropomorphic video game character and the protagonist of the Star Fox series. He was created and designed by Shigeru Miyamoto and Takaya Imamura. As his name implies, he is a red fox and the main character of the franchise.In ea... ch game the player controls Fox, usually in his Arwing with a few games such as Star Fox Adventures and Star Fox: Assault where you mainly control him on the ground in many occasions. He is the leader of the Star Fox team, and is joined by his wingmates on various missions.In the English release of Star Fox 64, he was voiced by Mike West. In both the Japanese release of Star Fox 64 and Super Smash Bros., Fox's voices were done by Shinobu Satōchi. For English dialogue of Super Smash Bros. Melee and Star Fox Adventures, Fox's voice was done by Rare's Steve Malpass. In Star Fox: Assault, his voice was done by Jim Walker in the English release and by Kenji Nojima in the Japanese release. Nojima reprised his role for Super Smash Bros. Brawl, as did Walker for the English version. In Star Fox 64 3D, he is voiced by Takashi Ōhara in Japanese   more
2 votes
0 comments
Fox McCloud - Voter Comments
No Comments
Vote & Comment
9

Sonic the Hedgehog, trademarked Sonic The Hedgehog, is the title character and protagonist of the Sonic the Hedgehog series released by Sega, as well as numerous spin-off comics, four animated shows, and an animated OVA. The first game was released ... on June 23, 1991, to provide Sega with a mascot to rival Nintendo's flagship character Mario. Since then, Sonic has become one of the world's best-known video game characters, with his series selling more than 80 million copies. In 2005, Sonic was one of the first game character inductees into the Walk of Game, alongside Mario and Link.While many individuals at Sega had a hand in Sonic's creation, programmer Yuji Naka and artist Naoto Ōshima are generally credited with the creation of the character. Sonic is a 15-year-old blue anthropomorphic hedgehog who has the ability to run at supersonic speeds and the ability to curl into a ball, primarily to attack enemies. Throughout the course of the video games, Sonic most commonly has to race through levels, collect power up rings and surviving against a host of natural obstacles and minions to achieve his goal   more
1 vote
0 comments
Sonic the Hedgehog - Voter Comments
No Comments
Vote & Comment
10

Spyro the Dragon is a platform game developed by Insomniac Games for the PlayStation. It stars the title character, a young purple dragon named Spyro, and his dragonfly friend, Sparx, and is the first game in the Spyro the Dragon series.The game rec... eived highly positive reviews, praising its graphics and reliability. It is now available for download at the PlayStation Store   more
1 vote
0 comments
Spyro the Dragon - Voter Comments
No Comments
Vote & Comment
11

Donkey Kong is an anthropomorphic gorilla appearing in the Donkey Kong and Mario video game franchises. A popular character, he has appeared in many video games. Donkey Kong was Mario's first opponent in Nintendo's popular 1981 arcade game, Donkey K... ong. Since then he has starred in his own series of games, starting with 1994's Donkey Kong Country for the Super Nintendo Entertainment System, and remains an important character in the spin-off games of the Mario series. DK debuted at the same time as Mario, and he still appears with Mario on occasion, appearing as a playable character in the Mario Kart and Super Smash Bros. Series, and is the primary antagonist in the Mario vs. Donkey Kong games   more
0 votes
0 comments
Donkey Kong - Voter Comments
No Comments
Vote & Comment
Leave a comment...
(Maximum 900 words)