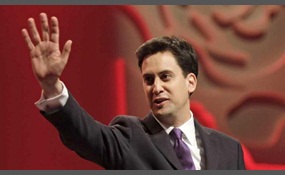 Who is the worst British politician?

Yes I know this is a biased poll

Edward Samuel "Ed" Miliband is a British Labour Party politician, currently the Leader of the Labour Party and Leader of the Opposition. He has been the Member of Parliament for Doncaster North since 2005 and served in the Cabinet from 2007 to 2010 ... under Prime Minister Gordon Brown. He and his brother, David Miliband, were the first siblings to sit in the Cabinet simultaneously since Edward, Lord Stanley, and Oliver Stanley in 1938.Born in London, Miliband graduated from Corpus Christi College at the University of Oxford, and the London School of Economics, becoming first a television journalist and then a Labour Party researcher, before rising to become one of Chancellor Gordon Brown's confidants and Chairman of HM Treasury's Council of Economic Advisers. When Brown became Prime Minister in 2007, he appointed Miliband as Minister for the Cabinet Office and Chancellor of the Duchy of Lancaster. Miliband was subsequently promoted to the new post of Secretary of State for Energy and Climate Change, a position he held from 2008 to 2010. Later in 2010, he was elected Leader of the Labour Party   more
2 votes
0 comments
Edward Miliband aka foolish leftie - Voter Comments
No Comments
Vote & Comment
2

Nicola Ferguson Sturgeon is the fifth and current First Minister of Scotland and the Leader of the Scottish National Party. She is the first woman to hold either position. Sturgeon represents Glasgow Southside as its MSP.A law graduate of the Univer... sity of Glasgow, Sturgeon worked as a solicitor in Glasgow. She was first elected to the Scottish Parliament in 1999, and served successively as the SNP's shadow minister for education, health and justice. In 2004, she announced that she would stand as a candidate for the leadership of the SNP following the resignation of John Swinney. However, she later withdrew from the contest in favour of Alex Salmond, standing instead as depute leader on a joint ticket with Salmond.Both were subsequently elected, and Sturgeon led the SNP in the Scottish Parliament from 2004 to 2007, when Alex Salmond was elected to the Scottish Parliament in the 2007 election. The SNP won the highest number of seats in the Scottish Parliament following the 2007 election, and Alex Salmond was subsequently appointed First Minister of Scotland. He appointed Sturgeon as Deputy First Minister and Cabinet Secretary for Health and Wellbeing   more
1 vote
0 comments
Nicola Sturgeon aka Nazi Nicola - Voter Comments
No Comments
Vote & Comment
3

Natalie Louise Bennett is an Australian-born British politician and the leader of the Green Party of England and Wales. She was elected to her position on 3 September 2012.
1 vote
1 comment
Natalie Bennett aka Ignorant Communist - Voter Comments

Caroline Lucas aka another Commie

Caroline Patricia Lucas is a British Green Party of England and Wales politician who has been the Member of Parliament for Brighton Pavilion since 2010, and is the UK's first ever Green MP.She was previously a Member of the European Parliament for S... outh East England from 1999 to 2010. And Leader of the Green Party from 2008 to 2012, when she stood down to devote more time to her parliamentary duties. She is noted for campaigning and writing on green economics, localisation, alternatives to globalisation, trade justice, animal welfare and food. In her time as a politician and activist, she has worked with numerous NGOs and think-tanks, including the RSPCA, CND and Oxfam   more
0 votes
0 comments
Caroline Lucas aka another Commie - Voter Comments
No Comments
Vote & Comment
5

George Galloway is a British politician, broadcaster, and writer. Since late March 2012 he has been the Respect Party Member of Parliament for Bradford West.After first coming to prominence in Scottish politics, he became General Secretary of the Lo... ndon based charity War on Want in 1983, remaining in the post until 1987. Galloway was first elected in that year's general election as a Labour Party MP representing Glasgow Hillhead. From 1997, Galloway represented its successor constituency Glasgow Kelvin, and remained as the MP for the seat until 2005. In October 2003, Galloway was expelled from Labour having been found guilty of four charges of bringing the party into disrepute.He became a leading member of the Respect Party in 2004, and was elected as the MP for Bethnal Green and Bow at the general election the following year. After unsuccessfully contesting the seat of Poplar and Limehouse in 2010, he returned as a Westminster MP following the Bradford West by-election in March 2012   more
0 votes
0 comments
George Galloway - Voter Comments
No Comments
Vote & Comment
9

Edward Michael "Ed" Balls is a British Labour Party and Co-operative Party politician, who has been the Member of Parliament for Morley and Outwood since 2010, and is the current Shadow Chancellor of the Exchequer.From 2005 to 2010, he was the MP fo... r Normanton and he served as Secretary of State for Children, Schools and Families under Gordon Brown from 2007-10.Balls is married to current Shadow Home Secretary and fellow Labour MP Yvette Cooper. In June 2007 they became the first married couple to serve together in a British Cabinet when Cooper became Chief Secretary to the Treasury   more
0 votes
0 comments
Ed Balls aka Miliband's Socialist sidekick - Voter Comments
No Comments
Vote & Comment
Leave a comment...
(Maximum 900 words)