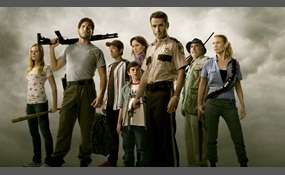 Who is your favorite character in The Walking Dead?

The options are only SOME surviving characters. There is an option for dead ones. There is another option if your character isn't on it.

Daryl Dixon is a fictional character from the horror drama television series The Walking Dead, which airs on AMC in the United States and is based on the comic book series of the same name. He was created by writers Frank Darabont, Charles H. Eglee ... and Jack LoGiudice and portrayed by Norman Reedus. The character was introduced in the first season as a Southern expert tracker who constantly lives in the shadow of his brother, Merle. Despite his ill temper and volatility, he is tolerated by the core group of survivors due to his skills in hunting animals and fearless efficiency in killing zombies.After Merle's disappearance, Daryl begins to shed his aloof personality and starts to bond with the group. The character eventually becomes the cooperative right-hand man and protector of protagonist Rick Grimes, and leads several supply runs. He is one of the longest surviving characters of the television series.Daryl is one of the few characters that do not have a counterpart in the graphic novels. His origin is explored in the 2013 video game The Walking Dead: Survival Instinct. The character was featured in a Super Bowl XLVII commercial for Time Warner Cable   more
4 votes
1 comment
Daryl Dixon - Voter Comments

Glenn is a fictional character from the horror drama television series The Walking Dead, which airs on AMC in the Unities States and is based on the comic book series of the same name. He was created by writers Frank Darabont, Charles H. Eglee and...  Jack LoGiudice and portrayed by Steven Yeun. The character was introduced in the first season as a pizza deliverer. He becomes a valuable member of the core group of survivors   more
3 votes
0 comments
Glenn - Voter Comments
No Comments
Vote & Comment
3
VOTING CLOSED

Rick Grimes is a fictional character in the comic book series The Walking Dead and is portrayed by Andrew Lincoln in the television series of the same name. Created by writer Robert Kirkman and artist Tony Moore, the character made his debut in The ... Walking Dead #1 in 2003. The primary protagonist of both series, Grimes is a small town sheriff's deputy. Which in the small town there was no Sheriff in which he retired and Rick Grimes was supposed to become sheriff but the world went to hell. He then awakens from a coma to find the world overrun with zombies. The series focus on Grimes' attempts to find and protect his wife Lori and son Carl, and his role as the de facto leader of a group of survivors in a post-apocalyptic world. In the comic series, he remains the longest living survivor as of October 2013, followed closely behind by his son Carl Grimes, friend and lover Andrea, Carol's daughter, Sophia, and Sophia's surrogate mother Maggie Greene.Rick Grimes has been described as an everyman character who emphasizes moral codes and values. Lincoln obtained the role in April 2010; Kirkman felt he was an "amazing find"   more
3 votes
1 comment
Rick Grimes - Voter Comments

Michonne is a fictional character from the comic book series The Walking Dead and is portrayed by Danai Gurira in the television series of the same name. Producer Frank Darabont stated in an interview with Fearnet in 2011 that Michonne would officia... lly appear in the third season of the show. After Darabont was fired, there was speculation that those plans might have changed. However, in an interview with The Watercooler in late January 2012, Gale Anne Hurd confirmed that Michonne would appear in future seasons. She had a predominant role in season 3 and became a major force within the group and as a character, becoming the main female protagonist and Rick's right-hand woman   more
2 votes
0 comments
Michonne - Voter Comments
No Comments
Vote & Comment
5
VOTING CLOSED

Carl Grimes is a fictional character from the comic book series The Walking Dead and is portrayed by Chandler Riggs in the American television series of the same name, which airs on AMC in the United States. The character was created by writer Rober... t Kirkman and artist Tony Moore, and debuted in The Walking Dead #2 in 2003. In both forms of media, Carl is the son of primary protagonist Rick Grimes and is one of the longest surviving characters.In the comic book series, Carl begins as a normal and innocent child, but as the events of the new world order force him to grow up, he becomes colder and competently makes sometimes brash decisions for the good of his group of friends. The character's development is similar in the television series, where he is a normal boy before adapting a callous and cold personality to survive. This behavior puts him into conflict with his father, who desires to maintain Carl's morality.For his performance as Carl, Riggs was nominated for the Young Artist Award for Best Performance in a TV Series - Leading Young Actor in 2012 and 2013   more
0 votes
0 comments
Carl Grimes - Voter Comments
No Comments
Vote & Comment
8
VOTING CLOSED

Carol or Carol Peletier is a fictional character from the comic book series The Walking Dead and is portrayed by Melissa McBride in the American television series of the same name.The direction of her character is contrasted between the two mediums....  In the comic series, Carol is displayed much younger, and exhibits a neurotic, sarcastic, and naive demeanor. Throughout her time in the comics, she grows increasingly unstable, to the extent of self-destruction. The television show differs in these regards, as she is shown to be a soft-spoken and doting individual, who has been gradually building inner strength. She is shown to be much more capable and emotionally stable than her comic book counterpart. In addition, the abuse she faced by her husband was explicitly shown in the show whereas it was merely hinted at for a brief moment.As of the end of the show's third season, she is the last remaining female survivor from the original Atlanta group, and one of the last original survivors overall, preceded by Rick, Carl, Glenn, and Daryl. Carol is also currently the series' longest-living female character   more
0 votes
0 comments
Carol Peletier - Voter Comments
No Comments
Vote & Comment
9
VOTING CLOSED

Maggie Greene is a fictional character from the comic book series The Walking Dead, portrayed by Lauren Cohan in the television series of the same name. She is Hershel Greene's eldest daughter and Glenn's lover. In the comics, she eventually becomes...  Glenn's wife and later widow, and takes the role of being a surrogate mother to Sophia Peletier following the suicide of the girl's biological mother. She currently acts as the de-facto leader of the Hilltop Colony   more
0 votes
0 comments
Maggie Greene - Voter Comments
No Comments
Vote & Comment
11
VOTING CLOSED

Beth Greene is a fictional character from the American horror drama television series The Walking Dead, which airs on AMC in the United States. She was created by former showrunner Glen Mazzara and is portrayed by Emily Kinney since the series' seco... nd season. Unlike most of the characters in the show, she has no counterpart in the graphic novels the series is based on. She is the daughter of veterinarian and farmer Hershel Greene and younger half-sister of Maggie, and later joins the group of protagonist Rick Grimes after her family's farm is overrun.The character's first major story arc involves her contemplating suicide following the disposal of the undead corpses of her mother, brother and friends, until she changes her mind. Beth eventually becomes the primary caretaker of Judith, Rick's baby daughter. Kinney was part of the recurring cast in the series' second and third seasons, before being promoted to a series regular in the fourth season   more
0 votes
0 comments
Beth Greene - Voter Comments
No Comments
Vote & Comment
12
VOTING CLOSED