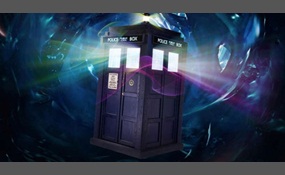 Who is your favorite Doctor Who character?

The Doctor is the title character in the long-running BBC science fiction television series Doctor Who, and has also featured in two cinema feature films and one made-for-television film, as well as a vast range of spin-off novels, audio dramas and ... comic strips connected to the series. Within the show, "the Doctor" is the alias assumed by a centuries-old alien who travels through space and time in his TARDIS, frequently with companions.To date, twelve actors have headlined the series as the Doctor, with the transition from actor to actor explained within the narrative of the show through the plot device of "regeneration", a biological function of his race allowing them to completely change their cellular structure and appearance so as to recover from a fatal injury. Several other actors have played the character on stage and film, in audio dramas, and in occasional special episodes of the series. The character's enduring popularity led the Daily Telegraph to dub him "Britain's favourite alien". The incumbent Doctor is the Twelfth Doctor, played by Peter Capaldi, who took over the role from Matt Smith in the 2013 Christmas special "The Time of the Doctor"   more
6 votes
2 comments
The Doctor - Voter Comments

Captain Jack Harkness is a fictional character played by John Barrowman in Doctor Who and its spin-off series, Torchwood. The character first appears in the 2005 Doctor Who episode "The Empty Child" and subsequently features in the remaining episode... s of the 2005 series as a companion to the series' protagonist, the Doctor. Subsequent to this, Jack became the central character in the adult-themed Torchwood, which aired from 2006 to 2011. Barrowman also reprised the role for guest appearances in Doctor Who in its 2007 series and 2008 series, as well as a 2010 special.In contrast to the Doctor, Jack is more of a conventional action hero, as well as outwardly flirtatious and capable of acts which the Doctor would view as less than noble. In the programme's narrative, Jack begins as a time traveller and former con man from the 51st century, who comes to travel with the Ninth Doctor and his companion Rose. In the 2005 finale however, Jack is killed and resurrected by Rose Tyler when she absorbs the immense powers of the time vortex. As a result of this, Jack becomes immortal and is stranded on 19th-century Earth   more
4 votes
1 comment
Jack Harkness - Voter Comments

Davros is a character from the long-running British science fiction television series Doctor Who. Davros is an archenemy of the Doctor and is the creator of the Doctor's deadliest enemies, the Daleks. Davros was created by screenwriter Terry Nation.... Davros is a scientist from the planet Skaro whose people, the Kaleds, were engaged in a bitter thousand-year war of attrition with their enemies, the Thals. He is horribly scarred and crippled, a condition that various spin-off media attribute to his laboratory being attacked by a Thal shell. He has one functioning hand and one cybernetic eye mounted on his forehead to take the place of his real eyes, which appear to have been fused shut; for much of his existence he depends completely upon a self-designed mobile life-support chair which encloses the lower half of his body. It would become an obvious inspiration for his eventual design of the Dalek. The condition of the lower half of his body is unknown; he is physically incapable of leaving the chair without dying. Davros's voice, like those of the Daleks, is electronically distorted   more
1 vote
0 comments
Davros - Voter Comments
No Comments
Vote & Comment
8

James Robert "Jamie" McCrimmon is a fictional character played by Frazer Hines in the long-running British science fiction television series Doctor Who. A piper of the Clan McLaren who lived in 18th century Scotland, he was a companion of the Second...  Doctor and a regular in the programme from 1966 to 1969. The spelling of his surname varies from one script to another; it is alternately rendered as Macrimmon and McCrimmond.Frazer Hines played Jamie in 116 episodes. His character appeared in more episodes of Doctor Who than any other companion. Conversely, Sarah Jane Smith appeared in 85 episodes of Doctor Who, but had a total of 139 episodes when her spin-offs, K-9 and Company and The Sarah Jane Adventures, are added to the count, or 141 if the charity specials are included   more
0 votes
0 comments
Jamie McCrimmon - Voter Comments
No Comments
Vote & Comment
10

Dorothy Gale McShane, better known by her nickname Ace, is a fictional character played by Sophie Aldred in the long-running British science fiction television series Doctor Who. A 20th-century Earth teenager from the London suburb of Perivale, she ... is a companion of the Seventh Doctor and a regular in the series from 1987 to 1989.Ace appeared in 9 stories, and was the Doctor's final companion in the original run of the classic series   more
0 votes
0 comments
Ace - Voter Comments
No Comments
Vote & Comment
11