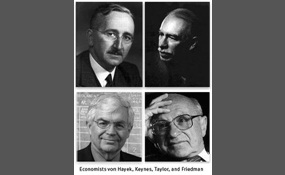 Who is your favorite economist

Friedrich Hayek CH, born in Austria-Hungary as Friedrich August von Hayek and frequently referred to as F. A. Hayek, was an Austrian, later British, economist and philosopher best known for his defence of classical liberalism. Hayek shared the Nobel...  Memorial Prize in Economic Sciences for his "pioneering work in the theory of money and economic fluctuations and ... Penetrating analysis of the interdependence of economic, social and institutional phenomena".Hayek was a major social theorist and political philosopher of the twentieth century, and his account of how changing prices communicate information which enables individuals to co-ordinate their plans is widely regarded as an important achievement in economics.Hayek served in World War I and said that his experience in the war and his desire to help avoid the mistakes that had led to the war led him to his career. Hayek lived in Austria, Great Britain, the United States and Germany, and became a British subject in 1938. He spent most of his academic life at the London School of Economics, the University of Chicago, and the University of Freiburg   more
3 votes
0 comments
Friedrich Hayek - Voter Comments
No Comments
Vote & Comment
3