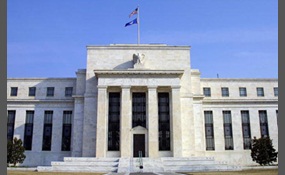 Who is your favorite Federal Reserve Chairman

Ben Shalom Bernanke is an American economist at the Brookings Institution who served two terms as chairman of the Federal Reserve, the central bank of the United States from 2006 to 2014. During his tenure as chairman, Bernanke oversaw the Federal R... eserve's response to the late-2000s financial crisis. Before becoming Federal Reserve chairman, Bernanke was a tenured professor at Princeton University and chaired the department of economics there from 1996 to September 2002, when he went on public service leave.From 2002 until 2005, he was a member of the Board of Governors of the Federal Reserve System, proposed the Bernanke Doctrine, and first discussed "the Great Moderation" — the theory that traditional business cycles have declined in volatility in recent decades through structural changes that have occurred in the international economy, particularly increases in the economic stability of developing nations, diminishing the influence of macroeconomic policy.Bernanke then served as chairman of President George W. Bush's Council of Economic Advisers before President Bush nominated him to succeed Alan Greenspan as chairman of the United States Federal Reserve   more
0 votes
0 comments
Ben Bernanke - Voter Comments
No Comments
Vote & Comment
4

Janet Louise Yellen is an American economist. She is the Chair of the Board of Governors of the Federal Reserve System, previously serving as Vice Chair from 2010 to 2014.Previously, she was President and Chief Executive Officer of the Federal Reser... ve Bank of San Francisco; Chair of the White House Council of Economic Advisers under President Bill Clinton; and Professor Emerita at the University of California, Berkeley, Haas School of Business. On January 6, 2014, the United States Senate confirmed Yellen's nomination to be Chair of the Federal Reserve Board of Governors. Yellen was sworn in on February 3, 2014, making her the first woman to hold the position   more
0 votes
0 comments
Janet Yellen - Voter Comments
No Comments
Vote & Comment
Leave a comment...
(Maximum 900 words)