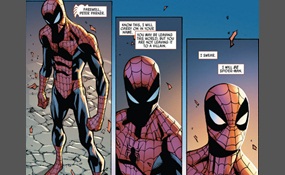 Who made a better Peter Parker?

The answer is obviously me...

Tobias Vincent "Tobey" Maguire is an American actor and film producer who began his career in the late 1980s. He is known for his role as Peter Parker / Spider-Man in Sam Raimi's Spider-Man film trilogy, as well as for his roles in Pleasantville, Th... e Cider House Rules, Wonder Boys, Seabiscuit, Brothers, and The Great Gatsby. He has been nominated for Screen Actors Guild and Golden Globe Awards and received two Saturn Awards, including one for Best Actor   more
9 votes
1 comment
Tobey Maguire - Voter Comments

Andrew Russell Garfield is an actor, of dual citizenship in the United States and the United Kingdom. Born in Los Angeles and raised in Surrey, Garfield began his career in the United Kingdom stage and television productions. He made his feature fil... m debut in the 2007 ensemble drama Lions for Lambs. Garfield first came to international attention in 2010 with a supporting role in the drama film The Social Network, for which he received Golden Globe and BAFTA nominations. His performance as Spider-Man / Peter Parker in the superhero film The Amazing Spider-Man, a reboot of the Spider-Man film series, was generally well received. Garfield is set to reprise his role in The Amazing Spider-Man 2, which is scheduled for release in 2014   more
5 votes
0 comments
Andrew Garfield - Voter Comments
No Comments
Vote & Comment
No comments yet.
Leave a comment...
(Maximum 900 words)
Privacy Policy | Terms of Use
Sitemap | View Desktop Version
©2021 Debate.org. All rights reserved.