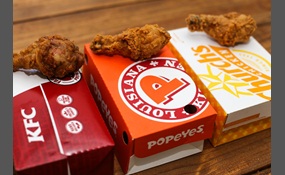 Owlz says2014-05-06T15:41:02.4415338-05:00
Report Post
I haven't had Popeyes but for me it is better by default as something about the Colonel's "secret recipe" makes me vomit. Seriously. KFC's breaded chicken makes me sick to my stomach. And this is coming from someone who has watched Higurashi with no problems.

TazM says2014-05-06T16:54:03.6530187-05:00
Report Post
Popeye's is crispier, juicier and contains less hormones, therefore, healthier. I think its delicious. KFC has some good items, but the hormones and a few other things turn me away from KFC when I want fried chicken or the like.

KFC is a fast food restaurant chain that specializes in fried chicken and is headquartered in Louisville, Kentucky, in the United States. It is the world's second largest restaurant chain after McDonald's, with 18,875 outlets in 118 countries and te... rritories as of December 2013. The company is a subsidiary of Yum! Brands, a restaurant company that also owns the Pizza Hut and Taco Bell chains.KFC was founded by Harland Sanders, an entrepreneur who began selling fried chicken from his roadside restaurant in Corbin, Kentucky, during the Great Depression. Sanders identified the potential of the restaurant franchising concept, and the first "Kentucky Fried Chicken" franchise opened in Utah in 1952. KFC popularized chicken in the fast food industry, diversifying the market by challenging the established dominance of the hamburger. By branding himself as "Colonel Sanders," Harland became a prominent figure of American cultural history, and his image remains widely used in KFC advertising. However, the company's rapid expansion saw it overwhelm the ageing Sanders, and in 1964 he sold the company to a group of investors led by John Y. Brown, Jr. And Jack C. Massey   more
10 votes
2 comments
KFC - Voter Comments