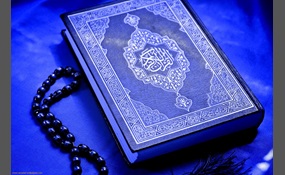 Who most likely wrote the Quran?

The term aṣ-ṣaḥābah refers to the companions, disciples, scribes and family of the Islamic prophet Muhammad. This form is definite plural; the indefinite singular is masculine ṣaḥābī, feminine ṣaḥābīyah.Later scholars accepted their testimony of the...  words and deeds of Muhammad, the occasions on which the Quran was revealed and various important matters of Islamic history and practice. The testimony of the companions, as it was passed down through chains of trusted narrators, was the basis of the developing Islamic tradition. From the traditions of the life of Muhammad and his companions are drawn the Muslim way of life, the code of conduct it requires and the jurisprudence by which Muslim communities should be regulated. The two largest Islamic denominations, the Sunni and Shia, take different approaches in weighing the value of the companions' testimony, have different hadith collections and, as a result, have different constructed views about the Sahabah   more
8 votes
2 comments
Followers of Muhammad - Voter Comments

Allah is the Arabic word for God. The word has cognates in other Semitic languages, including Elah in Aramaic, ʾĒl in Canaanite and Elohim in Hebrew.It is used mainly by Muslims to refer to God in Islam, but it has also been used by Arab Christians ... since pre-Islamic times. It is also often, albeit not exclusively, used by Bábists, Bahá'ís, Indonesian and Maltese Christians, and Mizrahi Jews. Christians and Sikhs in West Malaysia also use and have used the word to refer to God. This has caused political and legal controversies there as the law in West Malaysia prohibited them from using it   more
3 votes
2 comments
Allah - Voter Comments

UtherPenguin says2015-08-03T04:52:35.2084363Z
Report Post
Muhammad was illiterate. Even if he was literate, it would have been impossible to know what the information was in the Quran so he could not have written it. When Muhammad first began preaching with the Quran, he was met with much firm opposition. By the time he gained significant followers, a good portion of the Quran was already complete. So the Sahaba (companions) could not have written it either.

Comeinpeace says2015-08-31T01:36:03.1271235Z
Report Post
When you read the book and analyze all the scientific and historical miracles, you'll realize it couldn't have been written by a human being who lived 1400 years ago.
Vote & Comment
4

Muḥammad, full name Abū al-Qāsim Muḥammad ibn ʿAbd Allāh ibn ʿAbd al-Muṭṭalib ibn Hāshim, from Mecca, unified Arabia into a single religious polity under Islam. Believed by Muslims as well as Bábists and Bahá'ís to be a messenger and prophet of God,...  Muhammad is almost universally considered by Muslims as the last prophet sent by God to mankind. While non-Muslims generally regard Muhammad as the founder of Islam, Muslims consider him to have restored the unaltered original monotheistic faith of Adam, Abraham, Moses, Jesus, and other prophets in Islam. Muslims discuss Muhammad and other prophets of God with reverence, adding the phrase "peace be upon them" whenever their names are mentioned.Born approximately in 570 CE in the Arabian city of Mecca, Muhammad was orphaned at an early age; he was raised under the care of his paternal uncle Abu Talib. After his childhood Muhammad primarily worked as a merchant. Occasionally he would retreat to a cave in the mountains for several nights of seclusion and prayer; later, at age 40, he reported at this spot, that he was visited by Gabriel and received his first revelation from God   more
2 votes
0 comments
Muhammad - Voter Comments
No Comments
Vote & Comment
5

Someone in Muhammad;s close network of relations