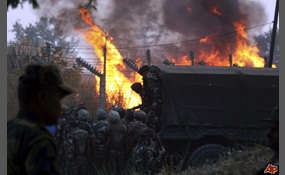 Who should get Kashmir?

India, officially the Republic of India, is a country in South Asia. It is the seventh-largest country by area, the second-most populous country with over 1.2 billion people, and the most populous democracy in the world. Bounded by the Indian Ocean ... on the south, the Arabian Sea on the south-west, and the Bay of Bengal on the south-east, it shares land borders with Pakistan to the west; China, Nepal, and Bhutan to the north-east; and Burma and Bangladesh to the east. In the Indian Ocean, India is in the vicinity of Sri Lanka and the Maldives; in addition, India's Andaman and Nicobar Islands share a maritime border with Thailand and Indonesia.Home to the ancient Indus Valley Civilisation and a region of historic trade routes and vast empires, the Indian subcontinent was identified with its commercial and cultural wealth for much of its long history. Four world religions—Hinduism, Buddhism, Jainism, and Sikhism—originated here, whereas Judaism, Zoroastrianism, Christianity, and Islam arrived in the 1st millennium CE and also helped shape the region's diverse culture. Gradually annexed by and brought under the administration of the British East India Company from the early 18th century and administered directly by the United Kingdom from the mid-19th century, India became an independent nation in 1947 after a struggle for independence that was marked by non-violent resistance led by Mahatma Gandhi   more
6 votes
0 comments
India - Voter Comments
No Comments
Vote & Comment
2

Pakistan, officially the Islamic Republic of Pakistan, is a sovereign country in South Asia. With a population exceeding 180 million people, it is the sixth most populous country and with an area covering 796,095 km², it is the 36th largest country ... in the world in terms of area. Pakistan has a 1,046-kilometre coastline along the Arabian Sea and the Gulf of Oman in the south and is bordered by India to the east, Afghanistan to the west and north, Iran to the southwest and China in the far northeast. It is separated from Tajikistan by Afghanistan's narrow Wakhan Corridor in the north, and also shares a marine border with Oman.The territory that now constitutes Pakistan was home to several ancient cultures, including the Mehrgarh of the Neolithic and the Bronze Age Indus Valley Civilisation, and was later home to kingdoms ruled by people of different faiths and cultures, including Hindus, Indo-Greeks, Muslims, Turco-Mongols, Afghans and Sikhs. The area has been ruled by numerous empires and dynasties, including the Indian Mauryan Empire, the Persian Achaemenid Empire, Alexander of Macedonia, the Arab Umayyad Caliphate, the Mongol Empire, the Mughal Empire, the Durrani Empire, the Sikh Empire and the British Empire. As a result of the Pakistan Movement led by Muhammad Ali Jinnah and Subcontinent's struggle for independence, Pakistan was created in 1947 as an independent nation for Muslims from the regions in the east and west of Subcontinent where there was a Muslim majority. Initially a dominion, Pakistan adopted a new constitution in 1956, becoming an Islamic republic. A civil war in 1971 resulted in the secession of East Pakistan as the new country of Bangladesh   more
4 votes
1 comment
Pakistan - Voter Comments

China, officially the People's Republic of China, is a sovereign state located in East Asia. It is the world's most populous country, with a population of over 1.35 billion. The PRC is a single-party state governed by the Communist Party, with its s... eat of government in the capital city of Beijing. It exercises jurisdiction over 22 provinces, five autonomous regions, four direct-controlled municipalities, and two mostly self-governing special administrative regions. The PRC also claims Taiwan – which is controlled by the Republic of China, a separate political entity – as its 23rd province, a claim which is controversial due to the complex political status of Taiwan.Covering approximately 9.6 million square kilometers, China is the world's second-largest country by land area, and either the third or fourth-largest by total area, depending on the method of measurement. China's landscape is vast and diverse, ranging from forest steppes and the Gobi and Taklamakan deserts in the arid north to subtropical forests in the wetter south. The Himalaya, Karakoram, Pamir and Tian Shan mountain ranges separate China from South and Central Asia. The Yangtze and Yellow Rivers, the third- and sixth-longest in the world, run from the Tibetan Plateau to the densely populated eastern seaboard. China's coastline along the Pacific Ocean is 14,500 kilometres long, and is bounded by the Bohai, Yellow, East and South China Seas   more
0 votes
0 comments
China - Voter Comments
No Comments
Vote & Comment
Leave a comment...
(Maximum 900 words)

scots says2014-05-27T14:51:23.7053411-05:00
Report Post
But the whole point Pakistan was formed was because they were Muslim and afraid that if there was a united India they would be outnumbered by the majority of Hindu's