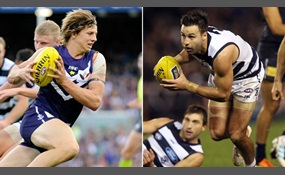 Who should i tip this week? Geelong or Fremantle in the AFL

The Geelong Football Club, nicknamed The Cats, is a professional Australian rules football club, named after and based in the city of Geelong, playing in the Australian Football League. The club has been the VFL/AFL premiers nine times, with three i... n the AFL era. Geelong has also won nine McClelland Trophies, a record it shares with Essendon.Formed in 1859, Geelong is the second oldest club in the AFL after Melbourne and one of the oldest football clubs in the world. The club participated in the first football competition in Australia, winning the second season in 1863, and was a foundation club of the Victorian Football Association in 1877 and the Victorian Football League in 1897.An early VFL powerhouse with six premierships up to 1963, Geelong developed a reputation as an under-achieving club. Despite playing in five losing Grand Finals, four between 1989 and 1995, its fans waited 44 years until it won another premiership—an AFL-record 119-point victory in the 2007 AFL Grand Final   more
1 vote
0 comments
Geelong Football Club - Voter Comments
No Comments
Vote & Comment
2

The Fremantle Football Club, nicknamed The Dockers, is an Australian rules football team that plays in the Australian Football League. The club is based in the port city of Fremantle at the mouth of the Swan River in Western Australia. In 1995 it be... came the second team from Western Australia to be admitted to the national Australian rules football competition, honouring the rich footballing tradition and history associated with Fremantle.Matthew Pavlich has been club captain since the beginning of the 2007 season. High profile players since the club's inception include Pavlich, the league's tallest ever player Aaron Sandilands, former captains Peter Bell and Shaun McManus, former number one draft pick Clive Waterhouse, winners of the AFL Rising Star award Paul Hasleby and Rhys Palmer, Jeff Farmer, Luke McPharlin, Nathan Fyfe and Hayden Ballantyne.The club is coached by Ross Lyon following the sacking of Mark Harvey at the end of the 2011 AFL home and away season. Fremantle has not won a premiership during its time in the AFL. Their most successful season to date was the 2013 season in which they finished runner up after losing in their first grand final appearance   more
0 votes
0 comments
Fremantle Football Club - Voter Comments
No Comments
Vote & Comment
No comments yet.
Leave a comment...
(Maximum 900 words)
Privacy Policy | Terms of Use
Sitemap | View Desktop Version
©2020 Debate.org. All rights reserved.