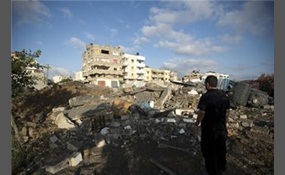 Who should pay the $5 billion needed to rebuild Palestine's infrastructure?

Hamas is a Palestinian Sunni Islamic organization, with an associated military wing, the Izz ad-Din al-Qassam Brigades, in the Palestinian territories and elsewhere in the Middle East including Qatar. Since 2007, it has governed the Gaza Strip, afte... r it won a majority of seats in the Palestinian Parliament in the 2006 Palestinian parliamentary elections and defeated the Fatah political organization in a series of violent clashes. Hamas is designated as a terrorist organization by Israel, the United States, the United Kingdom, Canada, the European Union, Jordan, Egypt and Japan. However its not a terrorist organisation in other states, including Iran, Russia, Turkey, China and many Arab nations.Based on the principles of Islamism gaining momentum throughout the Arab world in the 1980s, Hamas was founded in 1987 as an offshoot of the Egyptian Muslim Brotherhood. Co-founder Sheik Ahmed Yassin stated in 1987, and the Hamas Charter affirmed in 1988, that Hamas was founded to liberate Palestine from Israeli occupation and to establish an Islamic state in the area that is now Israel, the West Bank and the Gaza Strip   more
3 votes
1 comment
Hamas - Voter Comments

The USA and Israel

The aggressor as well as the it's enabler.
3 votes
3 comments
The USA and Israel - Voter Comments

iggy1993 says2014-08-07T06:57:53.9686834-05:00
Report Post
they indiscriminately and purposefully destroyed Palestine's infrastructure, they should pay for their actions!!! And nothing of that would have been able we're it not for the USA's war contributions.