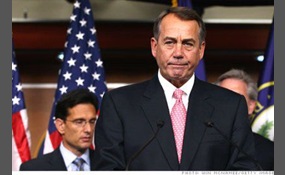 Who should replace John Boehner as Speaker of the House?

16 votes
10 comments
Someone else - Voter Comments

58539672 says2015-09-27T22:55:34.9740595Z
Report Post
It doesn't really matter. Boehner was kind of our last hope of getting Congress and the White House to work together. Anyone who replaces him will have to appease the most radical members of the GOP to get the spot, meaning that they will never cooperate with Obama. I don't expect much from this Congress at this point.
Vote & Comment
2

Kevin Owen McCarthy is the House Majority Leader of the United States House of Representatives and the U.S. Representative for California's 23rd District.A Republican, he was formerly Chairman of the California Young Republicans and the Young Republ... ican National Federation, McCarthy worked as district director for U.S. Representative Bill Thomas and in 2000 was elected to serve as a Trustee to the Kern Community College District. He then served in the California State Assembly from 2002 to 2006, including a spell from 2004 to 2006 as the Minority Leader. When Thomas retired from the House in 2006, McCarthy ran to succeed him and won the election. The 23rd district, is based in Bakersfield and includes large slices of Kern and Tulare counties.In the House, McCarthy served as House Chief Deputy Republican Whip from 2009 to 2011 and as House Majority Whip from 2011 to August 2014, when he was elected House Majority Leader to replace the outgoing Eric Cantor, who had been defeated in the Republican primary for his seat   more
1 vote
0 comments
Kevin McCarthy - Voter Comments
No Comments
Vote & Comment
3

Jeb Hensarling is an American politician who has served as a member of the United States House of Representatives from Texas's 5th congressional district since 2003. A member of the Republican Party, Hensarling currently chairs the House Financial S... ervices Committee, and has previously served as the chairman of the House Republican Conference from 2011 to 2013   more
0 votes
0 comments
Jeb Hensarling - Voter Comments
No Comments
Vote & Comment
Leave a comment...
(Maximum 900 words)

TBR says2015-09-27T17:05:45.0034507Z
Report Post
Because I am leaving the poll for Republicans to answer, and commenting on the internal destruction the GOP is experencing