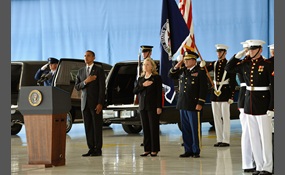 Who should take the blame for Benghazi

Clinton or Obama? Obama tried to silence, but Clinton got the cable and did nothing about it

New York junior Senator and former First Lady Hillary Rodham Clinton had expressed interest in the 2008 United States presidential election since at least October 2002, drawing media speculation on whether she would become a candidate. No woman has ... ever won the nomination of a major party in the history of U.S. presidential elections.On January 20, 2007, she announced that she was forming an exploratory committee and filed with the Federal Election Commission to seek the nomination of the Democratic Party. Subsequently she began fundraising and campaigning activities. For several months Clinton led opinion polls among Democratic candidates by substantial margins until Senator Barack Obama pulled close to or even with her. Clinton then regained her polling lead, winning many polls by double digits; by autumn 2007 she was leading all other Democratic candidates by wide margins in national polls. She placed third in the Iowa caucus to Barack Obama and John Edwards, and trailed considerably in polls shortly thereafter in New Hampshire before staging a comeback and finishing first in the primary there   more
8 votes
0 comments
Hillary Rodham Clinton presidential campaign, 2008 - Voter Comments
No Comments
Vote & Comment
2

Barack Hussein Obama II (/bəˈrɑːk huːˈseɪn oʊˈbɑːmə/; born August 4, 1961) is the 44th and current President of the United States. He is the first African American to hold the office. Obama served as a U.S. Senator representing the state of Illinois...  from January 2005 to November 2008, when he resigned following his victory in the 2008 presidential election.Born in Honolulu, Hawaii, Obama is a graduate of Columbia University and Harvard Law School, where he was the president of the Harvard Law Review. He was a community organizer in Chicago before earning his law degree. He worked as a civil rights attorney in Chicago and taught constitutional law at the University of Chicago Law School from 1992 to 2004. He served three terms representing the 13th District in the Illinois Senate from 1997 to 2004   more
1 vote
0 comments
Barack Obama - Voter Comments
No Comments
Vote & Comment
Leave a comment...
(Maximum 900 words)