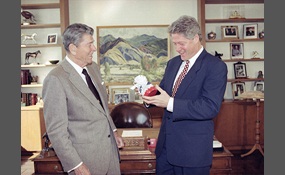 Who was a better President? And Why?

William Jefferson "Bill" Clinton is an American politician who served from 1993 to 2001 as the 42nd President of the United States. Inaugurated at age 46, he was the third-youngest president. He took office at the end of the Cold War, and was the fi... rst president from the baby boomer generation. Clinton has been described as a New Democrat. Many of his policies have been attributed to a centrist Third Way philosophy of governance. Before becoming president, he was the Governor of Arkansas for five terms, serving from 1979 to 1981 and from 1983 to 1992. He was also the state's Attorney General from 1977 to 1979.Born and raised in Arkansas, Clinton became both a student leader and a skilled musician. He is an alumnus of Georgetown University, where he was a member of Kappa Kappa Psi and Phi Beta Kappa and earned a Rhodes Scholarship to attend the University of Oxford. He is married to Hillary Rodham Clinton, who served as United States Secretary of State from 2009 to 2013 and who was a Senator from New York from 2001 to 2009. Both Clintons earned law degrees from Yale Law School, where they met and began dating   more
18 votes
6 comments
Bill Clinton - Voter Comments

imabench says2015-05-19T14:50:31.5647339-05:00
Report Post
both oversaw long periods of economic growth, but Reagan's idea of 'trickle down economics' never did trickle down, and he secretly authorized the sale of arms to Iran, which if Obama had done would have caused conservatives to call for his head.

Ronald Wilson Reagan was an American actor and politician. He was the 40th President of the United States, and served as the 33rd Governor of California prior to his presidency.Born and raised in small towns in Illinois, Reagan graduated from Eureka...  College and then worked as a radio broadcaster. He moved to Hollywood in 1937, where he began a career as an actor, first in films and later in television. Reagan served as President of the Screen Actors Guild and later as a spokesman for General Electric; his start in politics occurred during his work for G.E. Originally, he was a member of the Democratic Party, but due to the parties' shifting platforms during the 1950s, he switched to the Republican Party in 1962.After delivering a rousing speech in support of Barry Goldwater's presidential candidacy in 1964, he was persuaded to seek the California governorship, winning two years later and again in 1970. He was defeated in his run for the Republican presidential nomination in 1968 and in 1976, but won both the nomination and general election in 1980, defeating incumbent Jimmy Carter.As president, Reagan implemented sweeping new political and economic initiatives   more
11 votes
2 comments
Ronald Reagan - Voter Comments