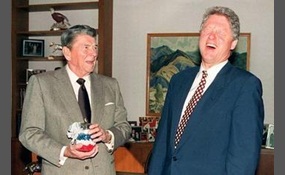 Who was a better president, Reagan or Clinton?

Ronald Wilson Reagan was an American actor and politician. He was the 40th President of the United States. Prior to his presidency, he served as the 33rd Governor of California.Born and raised in small towns in Illinois, Reagan graduated from Eureka...  College and then worked as a radio broadcaster. In 1937 he moved to Hollywood, where he began a career as an actor, first in films and later television. Reagan served as President of the Screen Actors Guild and later as a spokesman for General Electric; his start in politics occurred during his work for G.E. Originally, he was a member of the Democratic Party, but due to the parties' shifting platforms during the 1950s, he switched to the Republican Party in 1962.After delivering a rousing speech in support of Barry Goldwater's presidential candidacy in 1964, he was persuaded to seek the California governorship, winning two years later and again in 1970. He was defeated in his run for the Republican presidential nomination in 1968 and in 1976, but won both the nomination and general election in 1980, defeating incumbent Jimmy Carter.As president, Reagan implemented sweeping new political and economic initiatives   more
11 votes
1 comment
Ronald Reagan - Voter Comments

William Jefferson "Bill" Clinton is an American politician who served from 1993 to 2001 as the 42nd President of the United States. Inaugurated at age 46, he was the third-youngest president. He took office at the end of the Cold War, and was the fi... rst president from the baby boomer generation. Clinton has been described as a New Democrat. Many of his policies have been attributed to a centrist Third Way philosophy of governance. Before becoming president, he was the Governor of Arkansas for five two-year terms, serving from 1979 to 1981 and from 1983 to 1992. He was also the state's Attorney General from 1977 to 1979.Born and raised in Arkansas, Clinton became both a student leader and a skilled musician. He is an alumnus of Georgetown University, where he was a member of Kappa Kappa Psi and Phi Beta Kappa and earned a Rhodes Scholarship to attend the University of Oxford. He is married to Hillary Rodham Clinton, who served as United States Secretary of State from 2009 to 2013 and who was a Senator from New York from 2001 to 2009. Both Clintons received law degrees from Yale Law School, where they met and began dating   more
10 votes
3 comments
Bill Clinton - Voter Comments

Seido says2014-07-10T23:19:57.3121146-05:00
Report Post
Well, let's see. Clinton brought on one of the largest periods of growth in American history, led the country with liberal values, was intelligent, and a man of the people. On the down side though, he did cheat on his wife and then lied about it. Reagan, on the other hand, brought on an immense amount of inequality, got involved in scandals such as the Iran-Contra affair, assisted in the deregulation of the private sector (particularly banks) which led to the crash of 2008, and created a form of economics (Reaganomics) that doesn't actually work when put into practice. On the up side though, he did say "Mr. Gorbachev, tear down this wall!", which didn't really effect the court of events of the Cold War but certainly makes for an awesome quote. I'm pretty sure that if anyone actually looks at what the two presidents actually did, and the consequences thereof, instead of just looking at the issue on blind faith, they'll come to the conclusion that Clinton was the better president.

discomfiting says2014-07-10T23:22:27.1189146-05:00
Report Post
Reagan raised the national debt from 900 billion to $2.8 trillion because of reaganomics. Bill Clinton's economic plan created a surplus. Reagan committed high treason, funding terrorists and put Saddam in office with his pro-intervention policies compared to Bill that lied about getting head lol and rarely intervened in other countries. Socially, he isn't left enough but he's not left than reagan, so another win for personal responsibility. Reagan was awful and people only liked him because he's a charismatic religious white guy that invades personal freedoms and other couturiers.

SweetTea says2014-07-11T04:31:42.9935896-05:00
Report Post
Wow! This is a tough choice. I voted for both of these men. Reagan was truly the last Republican President who cared about the Middle Class. But Reagan's real strength seemed to be foreign policy. He wasn't always perfect with it. Still, it was much better than his domestic decisions. Clinton lead America into the last great era of prosperity that we had. He literally campaigned, back in '92, saying, "It's the Economy, stupid!" That was so true. Reagan had set us on the path of recovery, from the 80's recession. Still, the country wasn't quite there. Interest on homes was awful. I distinctly remember 11% for a fixed rate. On new cars, interest rates went as high as 16%. Ouch! Then, under Bush 41, we seemed to be slipping back into a recession. Clinton took reins on the economy & this country really took off. In my lifetime (and I'm 54), it was the BEST years for financial growth. Everybody did well. The Poor found a path out of poverty. The Middle Class really thrived. The Rich got a lot richer. In foreign policy, he had multiple successes too. So, I'd have to say Clinton was the most effective overall. Now, if we are going to compare character, the Gipper wins hands-down! http://www.sparknotes.com/biography/reagan/section8.rhtml, http://millercenter.org/president/clinton/essays/biography/5

Haroush says2014-07-11T07:01:46.1134057-05:00
Report Post
Right about now, we need a super president! Someone who has their Phd or something. Or perhaps someone who has had military experience, but also has experience with engineering and running a company. Meaning, we need a modern day Renaissance person to be our president at this point. Someone with the IQ as high as Einsteins or higher.

SweetTea says2014-07-11T07:56:20.6070829-05:00
Report Post
Haroush ... The computer industry did drive a lot of the growth in the 90's, but it doesn't equate to being totally responsible for the boom. As for Freddie Mac, the idea wasn't bad & it was created in 1970 (long before Clinton was Governor of Arkansas). Is Clinton's administration responsible for the housing collapse? Actually, policies by both Clinton & Bush are to blame. The real problem is greed. Greed IS bad. During Bush 41's administration, there was a huge collapse of S&Ls in America. A third of them failed -- over 1,000 banks! It robbed taxpayers of about $160B! What caused the problem? Well ... It was a toxic combination of deregulation (signed by Carter in 1980), Tax Reform Act of 1986 (signed by Reagan) and greed. The world of finance is like babysitting. None are truly mature enough to be left alone to do the right thing. It's like leaving a filled cookie jar on the table with the kids playing nearby ... You can say "just 1" but you can bet somebody will go for the second cookie, the third, or however many they can hold! Http://www.Theatlantic.Com/business/archive/2011/12/hey-barney-frank-the-government-did-cause-the-housing-crisis/249903/