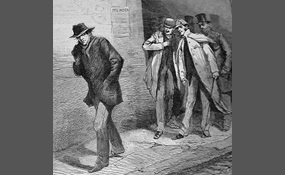 Who was Jack the Ripper?

Aaron Kosminski was an insane Polish Jew who was a suspect in the Jack the Ripper murders. He emigrated to England from Poland in the 1880s and worked as a hairdresser in Whitechapel in the East End of London, where the murders were committed in 188... 8. From 1891, he was institutionalized in an asylum.Police officials at the time of the murders named one of their suspects "Kosminski", and described him as a Polish Jew in an insane asylum. Almost a century after the final murder, the suspect "Kosminski" was identified with Aaron Kosminski, but there was little if any evidence to connect him with the murders, and the reasons for his inclusion as a suspect are unclear. Possibly, Kosminski was confused with another Polish Jew of the same age named Aaron or David Cohen, who was a violent patient at the same asylum   more
2 votes
0 comments
Aaron Kosminski - Voter Comments
No Comments
Vote & Comment
2

Francis Tumblety was an Irish-born American mountebank and medical quack who earned a small fortune posing as an "Indian Herb" doctor throughout the United States and Canada. He was an eccentric self-promoter and was often in trouble with the law. H... e has been put forward as a suspect in the notorious and still unsolved Jack the Ripper murder spree in Whitechapel, London, in autumn 1888   more
0 votes
0 comments
Francis Tumblety - Voter Comments
No Comments
Vote & Comment
3

George Chapman was a Polish serial killer known as the Borough Poisoner. Born Seweryn Antonowicz Kłosowski in Congress Poland, he moved as an adult to England, where he committed his crimes. He was convicted and executed after poisoning three women,...  but is remembered today mostly because some authorities suspected him of being the notorious serial killer, Jack the Ripper   more
0 votes
0 comments
George Chapman - Voter Comments
No Comments
Vote & Comment
4

Montague John Druitt was one of the suspects in the Jack the Ripper murders that took place in London between August and November 1888.He came from an upper-middle class English background, and studied at Winchester College and the University of Oxf... ord. After graduating, he was employed as an assistant schoolmaster at a boarding school and pursued a parallel career in the law; he qualified as a barrister in 1885. His main interest outside work was cricket, which he played with many leading players of the time, including Lord Harris and Francis Lacey.In November 1888, he lost his post at the school for reasons that remain unclear. One month later his body was found drowned in the River Thames. His death, which was found to be a suicide, roughly coincided with the end of the murders that were attributed to Jack the Ripper. Private suggestions in the 1890s that he could have committed the crimes became public knowledge in the 1960s, and led to the publication of books that proposed him as the murderer. The evidence against him was entirely circumstantial, however, and many writers from the 1970s onwards have rejected him as a likely suspect   more
0 votes
0 comments
Montague Druitt - Voter Comments
No Comments
Vote & Comment
5

Prince Albert Victor, Duke of Clarence and Avondale, was the eldest son of Albert Edward, Prince of Wales, and the grandson of the reigning British monarch, Queen Victoria. From the time of his birth, he was second in the line of succession to the B... ritish throne, but never became king: he died before his father and his grandmother, the Queen.Albert Victor was known to his family, and many later biographers, as "Eddy". When young, he travelled the world extensively as a naval cadet, and as an adult he joined the British Army, but did not undertake any active military duties. After two unsuccessful courtships, he was engaged to be married to Princess Mary of Teck in late 1891. A few weeks later, he died during an influenza pandemic. Mary later married his younger brother, George, who became King George V in 1910.Albert Victor's intellect, sexuality and mental health have been the subject of much speculation. Rumours linked him with the Cleveland Street scandal, which involved a homosexual brothel, but there is no conclusive evidence verifying or disproving the rumours or his sexual orientation   more
0 votes
0 comments
Prince Albert Victor, Duke of Clarence and Avondale - Voter Comments
No Comments
Vote & Comment
6

Walter Richard Sickert, born in Munich, Germany, was a painter and printmaker who was a member of the Camden Town Group in London. He was an important influence on distinctively British styles of avant-garde art in the 20th century.Sickert was a cos... mopolitan and eccentric who often favoured ordinary people and urban scenes as his subjects. His oeuvre also included portraits of well-known personalities and images derived from press photographs. He is considered a prominent figure in the transition from Impressionism to Modernism   more
0 votes
0 comments
Walter Sickert - Voter Comments
No Comments
Vote & Comment
7

Sir William Withey Gull, 1st Baronet of Brook Street was a prominent 19th-century English physician. Of modest family origins, he rose through the ranks of the medical profession to establish a lucrative private practice and serve in a number of pro... minent roles, including Governor of Guy's Hospital, Fullerian Professor of Physiology and President of the Clinical Society. In 1871, having successfully treated the Prince of Wales during a life-threatening attack of typhoid fever, he was created a Baronet and appointed to be one of the Physicians-in-Ordinary to HM Queen Victoria.Gull is remembered for a number of significant contributions to medical science, including advancing the understanding of myxoedema, Bright's disease, paraplegia and anorexia nervosa.Since the 1970s, Gull has been linked to the unsolved 1888 Whitechapel murders case. He was named as the murderer during the evolution of the widely discredited Masonic/royal conspiracy theory outlined in such books as Jack the Ripper: The Final Solution   more
0 votes
0 comments
Sir William Gull, 1st Baronet - Voter Comments
No Comments
Vote & Comment
8

James Maybrick was a Liverpool cotton merchant. After his death, his wife, Florence Maybrick, was convicted of his murder by poisoning in a sensational trial. The "Aigburth Poisoning" case was widely reported in the press on both sides of the Atlant... ic. More than a century after his death, Maybrick was named as a suspect in the notorious Jack the Ripper murders, but critics countered that supporting evidence was hoaxed   more
0 votes
0 comments
James Maybrick - Voter Comments
No Comments
Vote & Comment
9

Charles Lutwidge Dodgson, better known by his pen name, Lewis Carroll, was an English writer, mathematician, logician, Anglican deacon and photographer. His most famous writings are Alice's Adventures in Wonderland and its sequel Through the Looking... -Glass, as well as the poems "The Hunting of the Snark" and "Jabberwocky", all examples of the genre of literary nonsense. He is noted for his facility at word play, logic, and fantasy, and there are societies in many parts of the world dedicated to the enjoyment and promotion of his works and the investigation of his life   more
0 votes
0 comments
Lewis Carroll - Voter Comments
No Comments
Vote & Comment
10

Mary Pearcey was an English woman who was convicted of murdering her lover's wife, Mrs. Phoebe Hogg, and child, Phoebe, on 24 October 1890 and executed for the crime on 23 December of the same year. The crime is sometimes mentioned in connection wit... h Jack the Ripper, and Pearcey has been posited as a Ripper candidate   more
0 votes
0 comments
Mary Pearcey - Voter Comments
No Comments
Vote & Comment
Leave a comment...
(Maximum 900 words)

1Historygenius says2014-07-07T15:08:55.4677889-05:00
Report Post
Do as you wish. I was curious if anyone has any opinions on this case like I did. I have done some research and own a few books on the matter. If you want to research though go to Casebook Jack the Ripper and you will see all 22 suspects. I just came up with the ten most known by people. Generally most of these are also the most credible suspects. Some of them however are very weak.

SweetTea says2014-07-08T03:36:53.8459541-05:00
Report Post
Since all we have is suspects, there is no way to know who the killer was. No one was ever arrested & convicted. And the killings just mysteriously stopped. Http://www.Crimeandinvestigation.Co.Uk/crime-files/jack-the-ripper