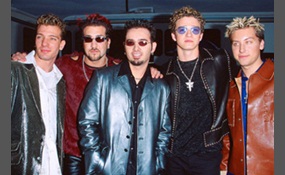 Who was more popular? NSYNC or Backstreet Boys?

'N Sync was an American boy band formed in Orlando, Florida, in 1995 and launched in Germany by BMG Ariola Munich. 'N Sync consisted of Justin Timberlake, JC Chasez, Chris Kirkpatrick, Joey Fatone, and Lance Bass. After heavily publicized legal batt... les with their former manager Lou Pearlman and former record label Sony BMG, the group's second album, No Strings Attached, sold over 1 million copies in one day and 2.42 million copies in one week. In addition to a host of Grammy Award nominations, 'N Sync has performed at the World Series, the Super Bowl and the Olympic Games, and sang or recorded with Elton John, Left Eye, Aerosmith, Mary J. Blige, Britney Spears, Nelly, Michael Jackson, Phil Collins, Stevie Wonder, Celine Dion, and Gloria Estefan.Although 'N Sync announced the start of a "temporary hiatus" in spring 2002, the band has not recorded new material since. The group's official website was shut down in the summer of 2006, and in 2007, Lance Bass confirmed that the group has "definitely broken up." They have sold over 50 million albums during their career   more
3 votes
1 comment
'N Sync - Voter Comments

The Backstreet Boys are an American vocal harmony group, formed in Orlando, Florida in 1993. The group consists of A. J. McLean, Howie Dorough, Nick Carter, Kevin Richardson, and Brian Littrell. They rose to fame with their debut international album... , Backstreet Boys. In the following year, they released their second international album Backstreet's Back and their U.S. debut album which continued the group's success worldwide. They rose to superstardom with their third studio album Millennium and its follow-up album, Black & Blue.After a two-year hiatus, they regrouped and released a comeback album Never Gone. Richardson left the group after the conclusion of Never Gone Tour in 2006 to pursue other interests. The group then released two albums as a quartet: Unbreakable and This Is Us.In 2012, the group announced that Richardson had rejoined them permanently, and in the following year they celebrated their 20th anniversary and released their first independent album, In a World Like This.The Backstreet Boys have sold over 130 million records worldwide, making them the best-selling boy band in history, and one of the world's best-selling music artists   more
0 votes
0 comments
Backstreet Boys - Voter Comments
No Comments
Vote & Comment
No comments yet.
Leave a comment...
(Maximum 900 words)
Privacy Policy | Terms of Use
Sitemap | View Desktop Version
©2021 Debate.org. All rights reserved.