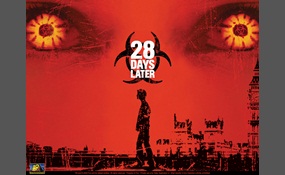 Who was most to blame for the outbreak of the 'Rage Virus' in 28 Days Later?

The activists released a chimp infected with the Rage virus, which when on to attack and infected one of the activists, eventually leading to the outbreak.
4 votes
1 comment
The Animal Rights Activists - Voter Comments

The company funding the research project

After being informed that the inhibitor has the opposite effect the desired, the representative of the company enlightens Dr Warren that the 'inhibitor' could have "other applications"
2 votes
0 comments
The company funding the research project - Voter Comments
No Comments
Vote & Comment
3

The scientists/ both doctors

Cambridge scientists Clive and Warren were hired to try and isolate the specific neurochemicals that cause anger and excessive aggression in humans in order to develop an inhibitor that regulates anger control issues. After they successfully develop... ed an inhibitor, Warren believed that delivering widespread with a pill or an aerosol wouldn't do, and decided to use the Ebola Virus as a delivery system. However, within two weeks, several isolated genomes in the Ebola Virus reacted to the inhibitor and mutated, causing the inhibitor to have the opposite effect - instead of inhibiting anger, it caused its hosts to become full of constant, uncontrollable rage - and creating the Rage Viru   more
0 votes
0 comments
The scientists/ both doctors - Voter Comments
No Comments
Vote & Comment
4

In the graphic novel, Clive is one of the Doctors who worked on creating the rage virus, and informs the animal rights activists of the experiments on Chimps. Without this information, the activists wouldn't have attempted to free the chimps, rele... asing the viru   more
0 votes
0 comments
Doctor Clive - Voter Comments
No Comments
Vote & Comment
5

Warren decides that the only feasible means of delivering the inhibitor widespread is by using a contagion as a delivery system. He genetically modifies the Ebola virus to carry the inhibitor, against Clive's strong objections. Two weeks later, the ... virus has mutated, reversing the inhibitor's effect - the Rage Virus is bor   more
0 votes
0 comments
Dr Warren - Voter Comments
No Comments
Vote & Comment
No comments yet.
Leave a comment...
(Maximum 900 words)
Privacy Policy | Terms of Use
Sitemap | View Desktop Version
©2020 Debate.org. All rights reserved.