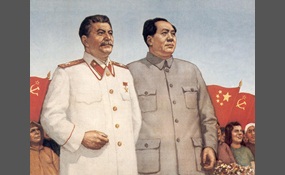 Who was the most evil person in history?

The devil got into these people and made them do evil things. This list contains dictators, killers and communist .

Georgian dictator . Communist He started as a communist by joining the Bolshevik party led by Vladimir Lenin and after Lenin's death ,he became leader. Although he had made an agreement with Adolf Hitler, Hitler betrayed him they became ene... mies in the second world war and Stalin fought on the Allied side but then became an enemy of the Americans and the British in the Cold War when they occupied land whilst fighting the Nazis. He caused many killings in secret and tortured many. He starved the Ukrainian people very badly. And he was not even a communist for he wanted to create an invincible army of Ape Men that would secure his rule, and he payed his scientist masses of money   more
9 votes
2 comments
Joseph Stalin - Voter Comments

Chinese dictator. Communist Son of a poor peasant farmer, was chairman of the Communist party of China and took over China after the fall of the Chinese emperor in 1948. At first he gave the Chinese workers a paradise and encouraging them to eat...  five meals a day, but then he wanted to show of and so he ordered them to stop making food and make steel. This caused brutal suffering and many people in died because of this. He ordered his people to beat and humiliate each other if they opposed him and capital punishment was brutal torture. He made a famous quote: "True Political power comes out of the barrel of a gun'. At last he blame this crisis on Marxism ( communism) when maybe China would be a great success if he actualy followed it   more
2 votes
0 comments
Mao Zedong - Voter Comments
No Comments
Vote & Comment
3

Idi Amin Dada was the third President of Uganda, ruling from 1971 to 1979. Amin joined the British colonial regiment, the King's African Rifles in 1946, serving in Kenya and Uganda. Eventually, Amin held the rank of major general in the post-colonia... l Ugandan Army and became its commander before seizing power in the military coup of January 1971, deposing Milton Obote. He later promoted himself to field marshal while he was the head of state. Amin's rule was characterized by human rights abuses, political repression, ethnic persecution, extrajudicial killings, nepotism, corruption, and gross economic mismanagement. The number of people killed as a result of his regime is estimated by international observers and human rights groups to range from 100,000 to 500,000. During his years in power, Amin shifted in allegiance from being a pro-Western ruler enjoying considerable Israeli support to being backed by Libya's Muammar Gaddafi, the Soviet Union, and East Germany. In 1975, Amin became the chairman of the Organisation of African Unity, a Pan-Africanist group designed to promote solidarity of the African states   more
1 vote
0 comments
Idi Amin Dada - Voter Comments
No Comments
Vote & Comment
6

Pol Pot, born Saloth Sar was a Cambodian communist revolutionary who led the Khmer Rouge from 1963 until 1997. From 1963 to 1981, he served as the General Secretary of the Communist Party of Kampuchea. As such, he became the leader of Cambodia on Ap... ril 17, 1975, when his forces captured Phnom Penh. From 1976 to 1979, he also served as the prime minister of Democratic Kampuchea.He presided over a totalitarian dictatorship that imposed a radical form of agrarian socialism on the country. His government forced urban dwellers to relocate to the countryside to work in collective farms and forced labor projects. The combined effects of executions, forced labor, malnutrition, and poor medical care caused the deaths of approximately 25 percent of the Cambodian population. In all, an estimated 1 to 3 million people died due to the policies of his four-year premiership.In 1979, after the Cambodian–Vietnamese War, Pol Pot fled to the jungles of southwest Cambodia, and the Khmer Rouge government collapsed   more
1 vote
1 comment
Pol Pot - Voter Comments

iamanatheistandthisiswhy says2014-07-23T01:40:10.5074003-05:00
Report Post
Not an easy choice as they were all horrendous. But I think Pol Pot edges it with destroying the whole country and killing all the intellectuals which was defined as wearing glasses.
Vote & Comment
7

Nero was Roman Emperor from 54 to 68, and the last in the Julio-Claudian dynasty. Nero was adopted by his great-uncle Claudius to become his heir and successor, and succeeded to the throne in 54 following Claudius' death. Nero focused much of his at... tention on diplomacy, trade, and enhancing the cultural life of the Empire. He ordered theaters built and promoted athletic games. During his reign, the redoubtable general Corbulo conducted a successful war and negotiated peace with the Parthian Empire. His general Suetonius Paulinus crushed a revolt in Britain. Nero annexed the Bosporan Kingdom to the Empire and began the First Roman–Jewish War. In 64 AD, most of Rome was destroyed in the Great Fire of Rome, which many Romans believed Nero himself had started in order to clear land for his planned palatial complex, the Domus Aurea. In 68, the rebellion of Vindex in Gaul and later the acclamation of Galba in Hispania drove Nero from the throne. Facing execution as a public enemy, he committed suicide on 9 June 68. His death ended the Julio-Claudian Dynasty, sparking a brief period of civil wars known as the Year of the Four Emperors   more
1 vote
0 comments
Nero - Voter Comments
No Comments
Vote & Comment
8

Killed both his two sons and his wife for fearing that they would appose his rule. Killed many children under the age of two whilst seeking to kill Jesus Christ. He strange scary visions after killing his wife, of her angry. He was also disloyal and...  looked for power any way he could get it   more
1 vote
0 comments
Herod of Jeudea - Voter Comments
No Comments
Vote & Comment
9

Ivan IV Vasilyevich, commonly known as Ivan the Terrible, was the Grand Prince of Moscow from 1533 to 1547 and Tsar of All the Russias from 1547 until his death. His long reign saw the conquest of the Khanates of Kazan, Astrakhan, and Siberia, trans... forming Russia into a multiethnic and multiconfessional state spanning almost one thousand million acres, approximately 4,046,856 km². Ivan managed countless changes in the progression from a medieval state to an empire and emerging regional power, and became the first ruler to be crowned as Tsar of All the Russians.Historic sources present disparate accounts of Ivan's complex personality: he was described as intelligent and devout, yet given to rages and prone to episodic outbreaks of mental illness. His mental illness increased in severity with his age, and the second period of his reign saw the deterioration of his mental state and consequently, his rule. In one such outburst, he killed his groomed and chosen heir Ivan Ivanovich. This left the Tsardom to be passed to Ivan's younger son, the weak and intellectually disabled Feodor Ivanovich   more
0 votes
0 comments
Ivan the Terrible - Voter Comments
No Comments
Vote & Comment
10

William H. Bonney, better known as Billy the Kid and also known as William Antrim, was a 19th-century gunman who participated in the Lincoln County War and became a frontier outlaw in the American Old West. According to legend, he killed 21 men, bu... t it is generally believed that he killed 8 people. He killed his first man in April 1 1877 at the age of 18. McCarty was 5'8" tall with blue eyes, blond hair or dirty blond hair, and a smooth complexion. He was described as being friendly and personable at times, and as lithe as a cat. Contemporaries described him as a "neat" dresser who favored an "unadorned Mexican sombrero". These qualities, along with his cunning and celebrated skill with firearms, contributed to his paradoxical image as both a notorious outlaw and a folk hero. Billy was relatively unknown during most of his lifetime but was catapulted into legend in 1881 when New Mexico's governor, Lew Wallace, placed a price on his head. In addition, the Las Vegas Gazette and the New York Sun carried stories about his exploits. Other newspapers followed suit. Several biographies written about Billy the Kid after his death portrayed him in varying lights   more
0 votes
0 comments
Billy the Kid - Voter Comments
No Comments
Vote & Comment
12

Mary I of England

Mary I was Queen of England and Ireland from July 1553 until her death. Her executions of Protestants caused her opponents to give her the sobriquet "Bloody Mary". She was the only child of Henry VIII and his first wife Catherine of Aragon who survi... ved to adulthood. Her younger half-brother, Edward VI, succeeded Henry in 1547. When Edward became mortally ill in 1553, he attempted to remove Mary from the line of succession because of religious differences. On his death their first cousin once removed, Lady Jane Grey, was initially proclaimed queen. Mary assembled a force in East Anglia and successfully deposed Jane, who was ultimately beheaded. In 1554, Mary married Philip of Spain, becoming queen consort of Habsburg Spain on his accession in 1556. As the fourth crowned monarch of the Tudor dynasty, Mary is remembered for her restoration of Roman Catholicism after the short-lived Protestant reign of her half-brother. During her five-year reign, she had over 280 religious dissenters burned at the stake in the Marian persecutions. Her re-establishment of Roman Catholicism was reversed after her death in 1558 by her younger half-sister and successor, Elizabeth I   more
0 votes
0 comments
Mary I of England - Voter Comments
No Comments
Vote & Comment
13

Equaly as bad!
0 votes
0 comments
All of them - Voter Comments
No Comments
Vote & Comment
Leave a comment...
(Maximum 900 words)

Stalin_Mario says2014-07-22T23:21:24.2914326-05:00
Report Post
You guys need to remember that even though people like Stalin, Mao, and Hitler did the most evil things, doesn't really make them the most evil people. There were people who were far more evil than the 3 I have listed, and if they were given the same amount of power as Stalin, then they would have done things that would have made their names feared more than the devil. Remember, good men with more power, can do more evil than evil men with less power.

lifemeansevolutionisgood says2014-07-22T23:22:15.9118734-05:00
Report Post
Lol, look at the question's description. This guy doesn't know much about communism if he lists it with killers and dictators. Also, so glad that I found one of these that did not have Vlad III on it.

Owl099 says2014-07-23T00:38:17.6227854-05:00
Report Post
What ? I don't know very much about Communism ? That is one of the most silly things that I have ever heard in my life. I know that some of these dictators did not completely take the ideas of Karl Marx, but they were officialy communists. I meant that these dictators were communist and if you look at my profile you will find that I am a keen communist.

Owl099 says2014-07-23T14:32:57.6966852-05:00
Report Post
Sorry, I misread your comment. I thought you said that I did not have a presidential candidate. Well, Lenin was the leader of the Bolshevik party and nearly all communist countries have a president. They may not follow the original ideas but they follow what I believe. You surely can't say that the Bolshevik party were not communist and they had a leader.

yetifivepecks says2014-08-05T20:11:46.0254562-05:00
Report Post
Mario makes an excellent point in saying that there have been many people who committed evil deeds, but were simply unable to do it on the scale of Mao, Stalin or Hitler. I would take it even further by pointing out that there are countless people that we may never know about today who would gladly commit atrocities on ever greater scale than the Three Scrooges but lack the means.
Privacy Policy | Terms of Use
Sitemap | View Desktop Version
©2020 Debate.org. All rights reserved.