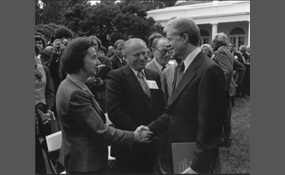 Who was the most influential American Resistance fighterl?

Crazy Horse, literally "His-Horse-Is-Crazy"; ca. 1840 – September 5, 1877 was a Native American war leader of the Oglala Lakota. He took up arms against the U.S. Federal government to fight against encroachments on the territories and way of life of...  the Lakota people, including leading a war party to victory at the Battle of the Little Bighorn in June 1876.Four months after surrendering to U.S. troops under General Crook in May 1877, Crazy Horse was fatally wounded by a military guard, using his bayonet, while allegedly resisting imprisonment at Camp Robinson in present-day Nebraska. He ranks among the most notable and iconic of Native American tribal members and has been honored by the U.S. Postal Service with a 13¢ Great Americans series postage stamp   more
4 votes
1 comment
Crazy Horse - Voter Comments

José Doroteo Arango Arámbula – better known by his pseudonym Francisco Villa or his nickname Pancho Villa – was one of the most prominent Mexican Revolutionary generals.As commander of the División del Norte, he was the veritable caudillo of the nor... thern Mexican state of Chihuahua, which, given its size, mineral wealth, and proximity to the United States of America, provided him with extensive resources. Villa was also provisional Governor of Chihuahua in 1913 and 1914. Although he was prevented from being accepted into the "panteón" of national heroes until some 20 years after his death, today his memory is honored by Mexicans. In addition, numerous streets and neighborhoods in Mexico are named in his honor.Villa and his supporters seized hacienda land for distribution to peasants and soldiers. He robbed and commandeered trains and, like the other revolutionary generals, printed fiat money to pay for his cause. Villa's men and supporters became known as Villistas during the revolution from 1910 to roughly 1920.Villa's dominance in northern Mexico was broken in 1915 through a series of defeats he suffered at Celaya and Agua Prieta at the hands of Álvaro Obregón and Plutarco Elías Calles. After Villa's famous raid on Columbus, New Mexico, in 1916, U.S. Army General John J. Pershing tried unsuccessfully to capture Villa in a nine-month pursuit that ended when the United States entered into World War I and Pershing was called back. Villa retired in 1920 and was given a large estate, which he turned into a "military colony" for his former soldiers. In 1923, he decided to reinvolve himself in Mexican politics and as a result was assassinated, most likely on the orders of Obregón   more
1 vote
1 comment
Pancho Villa - Voter Comments

Mulai Ahmed er Raisuni was a Sharif and a leader of the Jebala tribal confederacy in Morocco at the turn of the 20th Century. While regarded by foreigners and the Moroccan government as a brigand, some Moroccans, especially among the Jbala, consider... ed him a heroic figure, fighting a repressive, corrupt government, while others considered him a thief. Historian David S. Woolman referred to Raisuni as "a combination Robin Hood, feudal baron and tyrannical bandit." He was considered by many as "The last of the Barbary Pirates" though Barbary Coast piracy had ended by the middle of the 19th century. On the other hand, according to Douglas Porch, an American historian, Raisuni was part of the rule rather than the exception in that every successful Moroccan politician at the time combined villainy with sainthood. He died in 1925 after having been captured and imprisoned by his rival Abd el Krim   more
0 votes
0 comments
Mulai Ahmed er Raisuni - Voter Comments
No Comments
Vote & Comment
5

Osama bin Mohammed bin Awad bin Laden was the founder of al-Qaeda, the Sunni militant Islamist organization that claimed responsibility for the September 11 attacks on the United States, along with numerous other mass-casualty attacks against civili... an and military targets. He was a Saudi Arabian, a member of the wealthy bin Laden family, and an ethnic Yemeni Kindite.He was born in the bin Laden family to billionaire Mohammed bin Awad bin Laden in Saudi Arabia. He studied there in college until 1979, when he joined the mujahideen forces in Pakistan against the Soviets in Afghanistan. He helped to fund the mujahideen by funneling arms, money and fighters from the Arab world into Afghanistan, also gaining popularity from many Arabs. In 1988, he formed al-Qaeda. He was banished from Saudi Arabia in 1992, and shifted his base to Sudan, until US pressure forced him to leave Sudan in 1996. After establishing a new base in Afghanistan, he declared a war against the United States, initiating a series of bombings and related attacks. Bin Laden was on the American Federal Bureau of Investigation's lists of Ten Most Wanted Fugitives and Most Wanted Terrorists for his involvement in the 1998 U.S. embassy bombings   more
0 votes
0 comments
Osama bin Laden - Voter Comments
No Comments
Vote & Comment
6

Ho Chi Minh, born Nguyễn Sinh Côn, or Nguyễn Sinh Cung, also known as Nguyễn Tất Thành, Nguyen That Thanh and Nguyễn Ái Quốc, was a Vietnamese communist revolutionary leader who was prime minister and president of the Democratic Republic of Vietnam....  He was a key figure in the foundation of the Democratic Republic of Vietnam in 1945, as well as the People’s Army of Vietnam and the Việt Cộng during the Vietnam War.He led the Việt Minh independence movement from 1941 onward, establishing the communist-ruled Democratic Republic of Vietnam in 1945 and defeating the French Union in 1954 at the battle of Điện Biên Phủ. He officially stepped down from power in 1965 due to health problems, but remained a highly visible figurehead and inspiration for those Vietnamese fighting for his cause—a united, communist Vietnam—until his death. After the war, Saigon, the former capital of the Republic of Vietnam, was renamed Hồ Chí Minh City; however, the name Saigon is still very widely used   more
0 votes
0 comments
Ho Chi Minh - Voter Comments
No Comments
Vote & Comment
7

Sitting Bull was a Hunkpapa Lakota holy man who led his people as a tribal chief during years of resistance to United States government policies. He was killed by Indian agency police on the Standing Rock Indian Reservation during an attempt to arre... st him at a time when authorities feared that he would join the Ghost Dance movement.Before the Battle of the Little Bighorn, Sitting Bull had a vision in which he saw the defeat of the 7th Cavalry under Lt. Col. George Armstrong Custer on June 25, 1876. Sitting Bull's leadership motivated his people to a major victory. Months after their victory at the battle, Sitting Bull and his group left the United States for Wood Mountain, Saskatchewan, where he remained until 1881, at which time he surrendered to U.S. forces. A small remnant of his band under Chief Waŋblí Ǧí decided to stay at Wood Mountain.After working as a performer, Sitting Bull returned to the Standing Rock Agency in South Dakota. Because of fears that he would use his influence to support the Ghost Dance movement, Indian Service agent James McLaughlin at Fort Yates ordered his arrest. During an ensuing struggle between Sitting Bull's followers and the agency police, Sitting Bull was shot in the side and head by Standing Rock policemen Lieutenant Bull Head and Red Tomahawk after the police were fired upon by Sitting Bull's supporters. His body was taken to nearby Fort Yates for burial, but in 1953, his remains were possibly exhumed and reburied near Mobridge, South Dakota, by his Lakota family, who wanted his body to be nearer to his birthplace   more
0 votes
0 comments
Sitting Bull - Voter Comments
No Comments
Vote & Comment
8

John Brown was a white American abolitionist who believed armed insurrection was the only way to overthrow the institution of slavery in the United States. During the 1856 conflict in Kansas, Brown commanded forces at the Battle of Black Jack and th... e Battle of Osawatomie. Brown's followers also killed five slavery supporters at Pottawatomie. In 1859, Brown led an unsuccessful raid on the federal armory at Harpers Ferry that ended with his capture. Brown's trial resulted in his conviction and a sentence of death by hanging.Brown's attempt in 1859 to start a liberation movement among enslaved African Americans in Harpers Ferry, Virginia, electrified the nation. He was tried for treason against the Commonwealth of Virginia, the murder of five men and inciting a slave insurrection. He was found guilty on all counts and was hanged. Southerners alleged that his rebellion was the tip of the abolitionist iceberg and represented the wishes of the Republican Party to end slavery. Historians agree that the Harpers Ferry raid in 1859 escalated tensions that, a year later, led to secession and the American Civil War.Brown first gained attention when he led small groups of volunteers during the Bleeding Kansas crisis. Unlike most other Northerners, who advocated peaceful resistance to the pro-slavery faction, Brown believed that peaceful resistance was shown to be ineffective and that the only way to defeat the oppressive system of slavery was through violent insurrection. He believed he was the instrument of God's wrath in punishing men for the sin of owning slaves   more
0 votes
0 comments
John Brown - Voter Comments
No Comments
Vote & Comment
No comments yet.
Leave a comment...
(Maximum 900 words)
Privacy Policy | Terms of Use
Sitemap | View Desktop Version
©2021 Debate.org. All rights reserved.