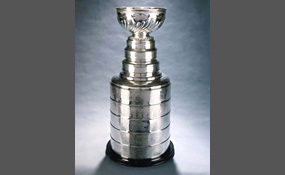 Who will win the Stanley Cup?

The Chicago Blackhawks are a professional ice hockey team based in Chicago, Illinois. They are members of the Central Division of the Western Conference of the National Hockey League. They have won five Stanley Cup championships since their founding...  in 1926. The Blackhawks are one of the "Original Six" NHL teams along with the Detroit Red Wings, Montreal Canadiens, Toronto Maple Leafs, Boston Bruins and New York Rangers. Since 1994, the club's home rink is the United Center. The club had previously played for 65 years at Chicago Stadium.The club's original owner was Frederic McLaughlin, who owned the club until his death in 1944. Under McLaughlin, a "hands-on" owner who fired many coaches during his ownership, the club won two Stanley Cup titles. The club was then owned by the Norris family, which as owners of the Chicago Stadium was the club's landlord, and owned stakes in several of the NHL teams. At first, the Norris ownership was as part of a syndicate fronted by long-time executive Bill Tobin, and the team languished in favor of the Norris-owned Detroit Red Wings. After the senior James E. Norris died in 1952, the Norris assets were spread among family members and James D   more
42 votes
11 comments
Chicago Blackhawks - Voter Comments

The Tampa Bay Lightning are a professional ice hockey team based in Tampa, Florida. They are members of the Atlantic Division of the Eastern Conference of the National Hockey League. They have one Stanley Cup championship in their history, in 2003–0... 4. They are often referred to as the Bolts, and the nickname is used on their current third jersey. They play their home games in the Amalie Arena in Tampa   more
22 votes
2 comments
Tampa Bay Lightning - Voter Comments

The New York Rangers are a professional ice hockey team based in the borough of Manhattan in New York City. They are members of the Metropolitan Division of the Eastern Conference of the National Hockey League. Playing their home games at Madison Sq... uare Garden, the Rangers are one of the oldest teams in the NHL, having joined in 1926 as an expansion franchise. They are part of the group of teams referred to as the Original Six, along with the Boston Bruins, Chicago Blackhawks, Detroit Red Wings, Montreal Canadiens, and Toronto Maple Leafs. The Rangers were the first NHL franchise in the United States to win the Stanley Cup, which they have done four times, most recently in 1993–94   more
10 votes
2 comments
New York Rangers - Voter Comments

Sidewalker says2015-05-29T04:59:29.9537072-05:00
Report Post
Once again, no Canadian team is in the playoffs, maybe Canada should change their national sport to Curling, or drinking beer. What's the difference between the Stanley Cup and Sidewalker? In the last twenty years, I've been to Canada.
Vote & Comment
4

The Anaheim Ducks are a professional ice hockey team based in Anaheim, California, United States. They are members of the Pacific Division of the Western Conference of the National Hockey League. Since their inception, the Ducks have played their ho... me games at the Honda Center.The club was founded in 1993 by The Walt Disney Company as the Mighty Ducks of Anaheim, a name based on the 1992 film The Mighty Ducks. Disney sold the franchise in 2005 to Henry and Susan Samueli, who along with GM Brian Burke changed the name of the team to the Anaheim Ducks before the 2006–07 season. In their 20-year existence, the Ducks have made the playoffs ten times and won three Pacific Division titles, two Western Conference championships, and the Stanley Cup   more
7 votes
0 comments
Anaheim Ducks - Voter Comments
No Comments
Vote & Comment
Leave a comment...
(Maximum 900 words)

birdlandmemories says2015-05-31T15:36:29.6613943-05:00
Report Post
Hawks in 6. Bishop and the triplet line for Tampa could keep things interesting, but Kane and Toews are tough to beat in the postseason and Chicago is so tough to beat up at the United Center. Tampa needs to win every game in Amalie Arena and I don't see that happening.