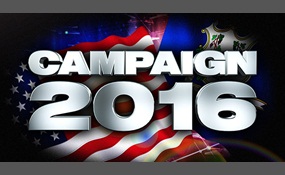 Who will you vote for in the 2016 presidential election?

Add other candidates, if needed.

Scott Kevin Walker is an American Republican legislator and politician who is the 45th Governor of Wisconsin. He was first elected Governor in 2010 and was sworn in on January 3, 2011. Walker was re-elected to a second term on November 4, 2014.Born ... in Colorado Springs, Colorado, Walker attended Marquette University in Milwaukee but did not graduate. He started his career working for IBM before gaining a marketing job with the American Red Cross. At age 22, Walker lost a run for the Wisconsin State Assembly in a Milwaukee district in 1990, which is the only competitive election, which Walker has lost in his career to date. He won his next bid for the Assembly after moving to a more conservative district in Wauwatosa, and served four more terms in the Assembly. In 2002, after the resignation of Tom Ament as Executive of Milwaukee County, Walker won in a special election to fill the seat, winning the first of three terms serving as County Executive in Milwaukee County from 2002 to 2010.In his first run for Governor in 2006 he dropped out before the Republican primaries. Walker again ran for the governorship in 2010, winning in a three-person race in the Republican primary   more
3 votes
1 comment
Scott Walker (R) - Voter Comments

Kim Jong-un is the supreme leader of the Democratic People's Republic of Korea. He is the son of Kim Jong-il and the grandson of Kim Il-sung. He has held the titles of the First Secretary of the Workers' Party of Korea, the Chairman of the Central M... ilitary Commission, First Chairman of the National Defence Commission of North Korea, the Supreme Commander of the Korean People's Army, and presidium member of the Politburo of the Workers' Party of Korea. He was officially declared the supreme leader following the state funeral for his father on 28 December 2011. He is the third and youngest son of Kim Jong-il and his consort Ko Young-hee.From late 2010, Kim Jong-un was viewed as heir apparent to the leadership of the nation, and following his father's death, he was announced as the "Great Successor" by North Korean state television. At Kim Jong-il's memorial service, North Korean Chairman of the Supreme People's Assembly Kim Yong-nam declared that "Respected Comrade Kim Jong-un is our party, military and country's supreme leader who inherits great comrade Kim Jong-il's ideology, leadership, character, virtues, grit and courage"   more
2 votes
1 comment
Kim Jong-un - Voter Comments

Gary Earl Johnson is an American businessman and politician. He served as the 29th Governor of New Mexico from 1995 to 2003, as a member of the Republican Party and was the Libertarian Party nominee for President of the United States in the 2012 ele... ction. In November 2014 Johnson announced that he would run again for the Libertarian Party presidential nomination in 2016.Born in Minot, North Dakota, Johnson moved with his family to New Mexico in his childhood. While a student at the University of New Mexico in 1974, Johnson sustained himself financially by working as a door-to-door handyman. In 1976 he founded Big J Enterprises, which grew from this one-person venture to become one of New Mexico's largest construction companies. He entered politics for the first time by running for Governor of New Mexico in 1994 on a fiscally conservative, low-tax and anti-crime platform. Johnson won the Republican Party of New Mexico's gubernatorial nomination, and defeated incumbent Democratic governor Bruce King   more
1 vote
1 comment
Gary Johnson - Voter Comments