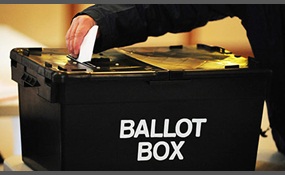 Who will you vote for in the UK general elections?

The UK Independence Party is a Eurosceptic right-wing populist political party in the United Kingdom, founded in 1993. The party describes itself in its constitution as a "democratic, libertarian party" and, as of May 2014, is reported to have a mem... bership of over 38,000.In September 2013, UKIP held 9 of the UK's 73 seats in the European Parliament, had three members in the House of Lords and held one seat in the Northern Ireland Assembly, though it has never won a seat in the House of Commons. The UKIP performance in the 2013 local elections was the "biggest surge for a fourth party" in British politics since the Second World War, coming fourth in the number of council seats won and third in nationwide vote share.Nigel Farage is the leader of UKIP after being re-elected on 5 November 2010, having previously been leader from 2006 to 2009. Farage is a founding member of the party and has been a UKIP Member of the European Parliament since 1999   more
3 votes
1 comment
UK Independence Party - Voter Comments

The Green Party is a political party in Sweden based upon green politics. The party was founded in 1981, emerging out of a sense of discontent with the existing parties' environmental policies, and sparked by the anti-nuclear power movement followin... g the 1980 nuclear power referendum. The party's breakthrough would come in the 1988 general election when they won seats in the Swedish Riksdag for the first time, capturing 5.5 percent of the vote, and becoming the first new party to enter parliament in seventy years. Three years later, they dropped back below the 4 percent threshold, but returned to parliament again in 1994, and since have retained representation there. In the most recent parliamentary election in 2010, the Greens received 7.34 percent of the vote, making the party the third largest in parliament.The party is represented nationally by two spokespeople, always one man and one woman. These roles are currently held by Gustav Fridolin and Åsa Romson   more
2 votes
2 comments
Green Party - Voter Comments

laurie1 says2014-05-28T15:06:15.7601117-05:00
Report Post
The description for this was one of the auto descriptions. It states that the green party is a Swedish party. However, the Green party on this list is the UK green party, as all of these are party that participate in the European elections. Sorry about the error. Description of the UK green party: The Green Party is a Centre left party which focuses on things such as investing more in looking after the environment to help stop climate change, increasing the minimum wage to a "real living wage" and taking public transport out of the hands of big business,
Vote & Comment
4

The Labour Party is a centre-left political party in the United Kingdom. It grew out of the trade union movement and socialist political parties of the nineteenth century and has been described as a broad church; containing a diversity of ideologica... l trends from strongly socialist, to more moderately social democratic.Founded in 1900, the Labour Party overtook the Liberal Party in general elections during the early 1920s and formed minority governments under Ramsay MacDonald in 1924 and 1929–31. The party was in a wartime coalition from 1940 to 1945, after which it formed a majority government under Clement Attlee. Labour was also in government from 1964 to 1970 under Harold Wilson and from 1974 to 1979, first under Wilson and then James Callaghan.The Labour Party was last in national government between 1997 and 2010 under Tony Blair and Gordon Brown, beginning with a landslide majority of 179, reduced to 167 in 2001 and 66 in 2005. Having won 258 seats in the 2010 general election, the party currently forms the Official Opposition in the Parliament of the United Kingdom   more
2 votes
1 comment
Labour Party - Voter Comments

The Democratic Unionist Party is the larger of the two main unionist political parties in Northern Ireland. Founded by Ian Paisley and now led by Peter Robinson, it is the largest party in the Northern Ireland Assembly and the fourth-largest party i... n the House of Commons of the United Kingdom.The DUP has strong links to Protestant churches, particularly the Free Presbyterian Church of Ulster, the church Paisley founded. However this influence has reduced under the Robinson leadership in an attempt to reach out to non-Protestants.Following on from the St Andrews Agreement in October 2006, the DUP agreed with the Irish republican party Sinn Féin to enter into power-sharing devolved government in Northern Ireland. In the aftermath of the agreement there were reports of divisions within the DUP. Many of its leading members, including Members of Parliament Nigel Dodds, David Simpson and Gregory Campbell, were claimed to be in opposition to Paisley. All the party's MPs fully signed up to the manifesto for the 2007 Assembly elections, supporting power-sharing in principle   more
0 votes
0 comments
Democratic Unionist Party - Voter Comments
No Comments
Vote & Comment
8

Sinn Féin is an Irish republican political party active in both the Republic and Northern Ireland. The name is Irish for "ourselves" or "we ourselves", although it is frequently mistranslated as "ourselves alone". Originating in the Sinn Féin organi... sation founded in 1905 by Arthur Griffith, it took its current form in 1970 after a split within the party, and has been associated with the Provisional IRA. Gerry Adams has been party president since 1983.Sinn Féin is currently the second-largest party in the Northern Ireland Assembly, where it has four ministerial posts in the power-sharing Northern Ireland Executive, and the fourth-largest party in the Oireachtas, the parliament of the Republic of Ireland. In the 2009 European Parliament election the Sinn Féin candidate in Northern Ireland, Bairbre de Brún, topped the poll, a first for the party in any Northern Ireland election. Sinn Féin also received a plurality of Northern Ireland votes in the 2010 United Kingdom general election, although the Democratic Unionist Party won more seats. It is the third biggest political party on the island of Ireland when both the 2011 general election in the Republic of Ireland and the 2011 Assembly election in Northern Ireland are taken into account, with a popular vote of 398,915   more
0 votes
0 comments
Sinn Féin - Voter Comments
No Comments
Vote & Comment
9

The Social Democratic and Labour Party is a social-democratic political party in Northern Ireland.The SDLP has fraternal links with other European social-democratic parties, including the Irish Labour Party and British Labour Party, and is affiliate... d to the Socialist International and Party of European Socialists. The SDLP is also an Irish nationalist party. Its basic party platform advocates Irish unification, and the further devolution of powers while Northern Ireland remains part of the United Kingdom. During the Troubles, the SDLP was the most popular Irish nationalist party in Northern Ireland, but since the Provisional IRA ceasefire in 1994 it has lost ground to the left-wing republican party Sinn Féin, which in 2001 became the more popular of the two parties for the first time. Established during the Troubles, a significant difference between the two parties was the SDLP's rejection of violence, in contrast to Sinn Féin's support for the Provisional IRA and physical force republicanism.The SDLP currently has three MPs in the House of Commons, and 14 MLAs in the Northern Ireland Assembly   more
0 votes
0 comments
Social Democratic and Labour Party - Voter Comments
No Comments
Vote & Comment
10

The Ulster Unionist Party – sometimes referred to as the Official Unionist Party or, in a historic sense, simply the Unionist Party – is the older of the two main unionist political parties in Northern Ireland. Before the split in unionism in the la... te 1960s, when the former Protestant Unionist Party began to attract more hardline support away from the UUP, it governed Northern Ireland between 1921 and 1972 as the sole major unionist party. It continued to be supported by most unionist voters throughout the period known as the Troubles.The UUP has lost support among Northern Ireland's unionist and Protestant community to the Democratic Unionist Party in successive elections at all levels of government since 1999. The party is currently led by Mike Nesbitt.In 2009 the party agreed to an electoral alliance with the Conservative Party and the two parties fielded joint candidates for elections to the House of Commons and the European Parliament under the banner of "Ulster Conservatives and Unionists – New Force". Literature and the website for the 2009 European Parliament election used "Conservatives and Unionists" as the short name. The party held its European seat but lost all its Westminster seats when their sole MP left the party in protest at the alliance and ran as an Independent   more
0 votes
0 comments
Ulster Unionist Party - Voter Comments
No Comments
Vote & Comment
13

The Scottish Green Party is a green party in Scotland. It has two MSPs in the devolved Scottish Parliament: Alison Johnstone, representing Lothian; and Patrick Harvie, representing Glasgow, alongside fourteen councillors.It is the only party other t... han the Scottish National Party to both support Scottish independence and have representation in Scottish Parliament   more
0 votes
0 comments
Scottish Green Party - Voter Comments
No Comments
Vote & Comment
14

Traditional Unionist Voice is a unionist political party in Northern Ireland founded on 7 December 2007, as an anti-St Andrews Agreement splinter group from the Democratic Unionist Party. Its first and current leader is Jim Allister who, until 2009,...  sat as an independent Member of the European Parliament, having been elected for the DUP in 2004. In the 2009 European elections Allister lost his seat when he stood as a TUV candidate. In June 2008, it was announced that former Ulster Unionist Party MP William Ross had been made party president.The founding principles of the TUV were:retention of the Union between Northern Ireland and Great Britaincommitment to a form of devolution that rejects mandatory coalitionthat the rule of law must prevail in every part of Northern Ireland and be administered without fear or favoursupport for socially conservative value   more
0 votes
0 comments
Traditional Unionist Voice - Voter Comments
No Comments
Vote & Comment
15

The British National Party was a far right political party that operated in the United Kingdom from 1960 to 1967. Led by John Bean the group, which was subject to internal divisions during its brief history, established some areas of local support b... efore helping to form the National Front in 1967   more
0 votes
0 comments
British National Party - Voter Comments
No Comments
Vote & Comment
16

The Socialist Workers Party is a far-left party in Britain. Founded as the Socialist Review Group by supporters of Tony Cliff in 1950, it became the International Socialists in 1962 and the SWP in 1977. The party considers itself to be Trotskyist, a... nd Cliff and his followers criticized the former USSR, and its satellites, calling them "state capitalist", rather than socialist countries.Over the decades, the SWP has used a number of 'fronts', such as the Anti-Nazi League in the late 1970s and from 2001, the Stop the War Coalition. It also formed an alliance with George Galloway and Respect; this alignment's eventual dissolution in 2007 caused an internal crisis in the SWP, as did rape allegations against a leading member of the party which emerged publicly at the beginning of 2013.On the international level, the SWP is part of the International Socialist Tendency   more
0 votes
0 comments
Socialist Workers Party - Voter Comments
No Comments
Vote & Comment
Leave a comment...
(Maximum 900 words)