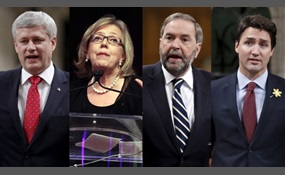 Who won the Canadian National Debate?

Justin Pierre James Trudeau MP is a Canadian politician and the leader of the Liberal Party of Canada. Trudeau is the eldest son of Pierre Trudeau, long-serving Prime Minister, and Margaret Trudeau. He was elected as the Member of Parliament for the...  riding of Papineau in 2008, and re-elected in 2011. He has served as the Liberal Party's critic for Youth and Multiculturalism, Citizenship and Immigration, and Post Secondary Education, Youth and Amateur Sport. On April 14, 2013, Trudeau was elected leader of the Liberal Party of Canada   more
3 votes
1 comment
Justin Trudeau [Grits] - Voter Comments

Stephen Joseph Harper is a Canadian politician who is the 22nd and current Prime Minister of Canada and the Leader of the Conservative Party. Harper became prime minister in 2006, forming a minority government after the 2006 election. He is the firs... t prime minister to come from the newly reconstituted Conservative Party, which formed after a merger of the Progressive Conservative Party and the Canadian Alliance.Harper has been the Member of Parliament for the riding of Calgary Southwest in Alberta since 2002. Earlier, from 1993 to 1997, he was the MP for Calgary West. He was one of the founding members of the Reform Party, but did not seek re-election in the 1997 federal election. Harper instead joined and later led the National Citizens Coalition, a conservative lobbyist group. In 2002, he succeeded Stockwell Day as leader of the Canadian Alliance and returned to parliament as Leader of the Opposition. In 2003, he reached an agreement with Progressive Conservative leader Peter MacKay for the merger of their two parties to form the Conservative Party of Canada. He was elected as the party's first non-interim leader in March 2004   more
2 votes
0 comments
Stephen Harper [Tories] - Voter Comments
No Comments
Vote & Comment
3

Thomas Joseph "Tom" Mulcair PC MP is the leader of the New Democratic Party of Canada, as well as the Leader of the Official Opposition in Canada. An NDP Member of Parliament for the electoral district of Outremont in Quebec since 2007, he was selec... ted as the leader of the NDP at a leadership election on March 24, 2012, with 57.2% of the votes on the fourth and final ballot.A lawyer and university professor, Mulcair joined the federal NDP in 1974. He was the provincial Member of the National Assembly of Quebec for the riding of Chomedey in Laval from 1994 to 2007, holding the seat for the Liberal Party of Quebec. He served as the Minister of Sustainable Development, Environment and Parks from 2003 until 2006, in the Liberal government of Premier Jean Charest. Elected MP for Outremont in a by-election in 2007, he was named co-Deputy Leader of the NDP shortly afterwards, and has won re-election twice.On May 26, 2011, he was named the New Democratic Party's Opposition House Leader and also served as the NDP's Quebec lieutenant, posts he held until named party leader   more
2 votes
1 comment
Thomas Mulcair [NDP] - Voter Comments

IrinaZ says2015-11-13T01:47:46.6243618Z
Report Post
Strongest arguments, solid evidence, good presentation. Clear intent for his action plan for Canada. Please remember this is not the party that I necessarily support, it is the candidate who won the debate.
Vote & Comment
4

Elizabeth Evans May OC MP is an American-born Canadian environmentalist, writer, activist, lawyer, and politician currently serving as leader of the Green Party of Canada and Member of Parliament for Saanich—Gulf Islands. She was the executive direc... tor of the Sierra Club of Canada from 1989 to 2006. She became a Canadian citizen in 1978, and stated in a letter to the editor published in The Globe and Mail in February 2014 that she did not retain her US citizenship.May's permanent residence is in Sidney, British Columbia. Her family home is in Margaree Harbour, Cape Breton Island. On May 2, 2011, she became the first elected Green Party Member of Parliament in Canada, defeating the incumbent Conservative Member of Parliament and cabinet minister, Gary Lunn   more
1 vote
1 comment
Elizabeth May [Greens] - Voter Comments

Midnight1131 says2015-08-07T22:32:49.8023530Z
Report Post
Her party probably won't win more than 3 seats [even that's optimistic,] but she was the most informed and best spoken debater. I don't know what was up with Mulcair, but he wasn't debating in the way you'd expect him to after watching him in the house. Harper was painfully uninspired. Trudeau was the 2nd best, but he went a bit overboard with the interruptions [they were funny though,] and was choppy at times.
Vote & Comment
Leave a comment...
(Maximum 900 words)

o0jeannie0o says2015-08-07T22:16:37.8964848Z
Report Post
To tell you the truth I like the NDP plans to better the economy and our health care / school systems. I live near the oil field and can see the positive changes they make, In fort McMurray we have a great young environment . A baby is born here every 6 hours but we have 3, yes only 3 people who are able to deliver them and severly overcrowded schools. The taxes on small cororations are worse then the oil sands so we have like no where to shop and stuff here costs a lot (example i am selling a box of chocolate (4 truffles) for $12!) I disagree with the green Party and ABSOLUTLY do not agree with harper. Liberals are second to best for me.