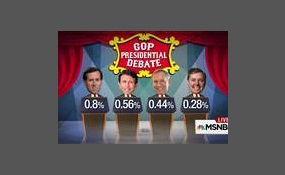 Who won the 'Happy Hour' debate?

We've all seen the poll about who won the MAIN gop debate, but who do you think won the happy hour debate right before that?

imabench says2015-09-19T01:02:48.2292600Z
Report Post
He had the most speaking time of all the other candidates and although some of his stances were all over the place, he routinely got the biggest reactions from the crowd than the other 3
Vote & Comment
2

Piyush "Bobby" Jindal is an American politician who is the 55th and current Governor of Louisiana and the Vice Chairman of the Republican Governors Association.Jindal was born in Baton Rouge, Louisiana, to immigrants from India. Prior to entering po... litics, Jindal studied for a Bachelor of Science in biology and public policy at Brown University from 1988 to 1991 and then a Master of Letters in political science from New College, Oxford, as a Rhodes Scholar. He worked for McKinsey & Company and interned for Representative Jim McCrery of Louisiana. In 1996, Governor Murphy Foster appointed Jindal Secretary of the Louisiana Department of Health and Hospitals, and in 1999 he was appointed President of the University of Louisiana System. In 2001, Jindal was appointed as the principal adviser to Tommy Thompson, the United States Secretary of Health and Human Services by President George W. Bush.He first ran for governor in 2003 and won a plurality in the nonpartisan blanket primary but lost in the general election to Democrat Kathleen Blanco. He then won a seat in the United States House of Representatives in the 2004 elections   more
1 vote
0 comments
Bobby Jindal - Voter Comments
No Comments
Vote & Comment
4

Richard John "Rick" Santorum is an American attorney and Republican Party politician. He served as a United States Senator representing Pennsylvania and was the Senate's third-ranking Republican. He ran as a candidate for the 2012 Republican Party p... residential nomination, finishing second to the eventual Republican nominee Mitt Romney.Born in Virginia, Santorum was raised primarily in Butler, Pennsylvania. He obtained an undergraduate degree from Pennsylvania State University, an M.B.A. From the University of Pittsburgh, and a J.D. From the Dickinson School of Law. Santorum worked as an attorney at Kirkpatrick & Lockhart, where he met Karen Garver. They married in 1990, and have seven living children. Santorum was elected to the U.S. House of Representatives to represent Pennsylvania's 18th congressional district in 1990 and later became a member of a group dubbed the "Gang of Seven".Santorum was elected as a United States Senator for Pennsylvania in 1994. He served two terms until losing his re-election bid in 2006. A devout, practicing Catholic, Santorum is a social conservative who opposes same-sex marriage and artificial birth control   more
0 votes
0 comments
Rick Santorum - Voter Comments
No Comments
Vote & Comment
Leave a comment...
(Maximum 900 words)