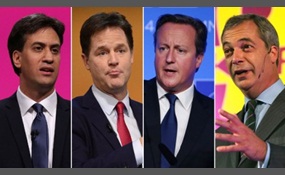 Who won the UK election debate?

Nigel Paul Farage is a British politician and leader of the UK Independence Party since 2010, a position he also held from September 2006 to November 2009. Since 1999 he has been a Member of the European Parliament for South East England. He co-chai... rs the Europe of Freedom and Direct Democracy group.Farage was a founding member of UKIP, having left the Conservative Party in 1992 after the signing of the Maastricht Treaty. Having unsuccessfully campaigned in European and Westminster parliamentary elections for UKIP since 1994, he won a seat as MEP for South East England in the 1999 European Parliament Election – the first year the regional list system was used – and was re-elected in 2004, 2009, and 2014.In September 2006, Farage became the UKIP Leader and led the party through the 2009 European Parliament Election when it received the second-highest share of the popular vote, defeating Labour and the Liberal Democrats with over two million votes. He stepped down in November 2009 to concentrate on contesting Buckingham, the constituency of the Speaker, John Bercow, at the 2010 general election. Farage came third   more
3 votes
0 comments
Nigel Farage - Voter Comments
No Comments
Vote & Comment
2

Natalie Louise Bennett is an Australian-born British politician and the leader of the Green Party of England and Wales. She was elected to her position on 3 September 2012.
2 votes
0 comments
Natalie Bennett - Voter Comments
No Comments
Vote & Comment
3

Nicola Ferguson Sturgeon is the fifth and current First Minister of Scotland and the Leader of the Scottish National Party. She is the first woman to hold either position. Sturgeon represents Glasgow Southside as its MSP.A law graduate of the Univer... sity of Glasgow, Sturgeon worked as a solicitor in Glasgow. She was first elected to the Scottish Parliament in 1999, and served successively as the SNP's shadow minister for education, health and justice. In 2004, she announced that she would stand as a candidate for the leadership of the SNP following the resignation of John Swinney. However, she later withdrew from the contest in favour of Alex Salmond, standing instead as depute leader on a joint ticket with Salmond.Both were subsequently elected, and Sturgeon led the SNP in the Scottish Parliament from 2004 to 2007, when Alex Salmond was elected to the Scottish Parliament in the 2007 election. The SNP won the highest number of seats in the Scottish Parliament following the 2007 election, and Alex Salmond was subsequently appointed First Minister of Scotland. He appointed Sturgeon as Deputy First Minister and Cabinet Secretary for Health and Wellbeing   more
2 votes
2 comments
Nicola Sturgeon - Voter Comments

Episteme says2015-04-02T19:02:14.0860370-05:00
Report Post
I believe that Nicola Sturgeon did very well at the debate because she kept to the point, was well spoken, and spoke not just for the SNP, not just for Scotland, but for the UK as a whole. Her party may be the party which labour or conservatives will have to make a coalition with.
Vote & Comment
4

David William Donald Cameron is the Prime Minister of the United Kingdom and Leader of the Conservative Party. He represents Witney as its Member of Parliament.Cameron studied Philosophy, Politics and Economics at Brasenose College, Oxford, gaining ... a first-class honours degree in 1988. He was described by his tutor, Professor Vernon Bogdanor, as "one of the ablest" students he has ever taught, with "moderate and sensible Conservative" political views. While at Oxford he was a member of the Bullingdon Club. He then joined the Conservative Research Department and became Special Adviser to Norman Lamont, and then to Michael Howard. He was Director of Corporate Affairs at Carlton Communications for seven years.Cameron first stood for Parliament in Stafford in 1997. He ran on a Eurosceptic platform, and was defeated by a swing close to the national average. His first successful attempt to become an MP was in the 2001 general election for the Oxfordshire constituency of Witney. He was promoted to the Opposition front bench two years later, and rose rapidly to become head of policy co-ordination during the 2005 general election campaign   more
2 votes
0 comments
David Cameron - Voter Comments
No Comments
Vote & Comment
5

Nicholas William Peter "Nick" Clegg is a British politician who since 2010 has been Deputy Prime Minister of the United Kingdom and Lord President of the Council, as part of the coalition government headed by Prime Minister David Cameron. Clegg has ... been the leader of the Liberal Democrats since 2007, and a member of parliament representing Sheffield Hallam since 2005. Having attended the University of Cambridge, the University of Minnesota, and the College of Europe, he was previously a Member of the European Parliament and an award-winning journalist for the Financial Times.Clegg was elected to the House of Commons at the 2005 general election and became the Liberal Democrats' Home Affairs spokesperson in 2006. He became Deputy Prime Minister following the 2010 general election, when the Liberal Democrats formed a coalition government with the Conservative Party. As well as his parliamentary roles, Clegg has contributed to many pamphlets and books on political issues. A fluent speaker of five European languages, he has also had a large number of jobs, including being a skiing instructor and working in the office of a bank in Helsinki   more
1 vote
0 comments
Nick Clegg - Voter Comments
No Comments
Vote & Comment
6

Edward Samuel "Ed" Miliband is a British Labour Party politician, currently the Leader of the Labour Party and Leader of the Opposition. He has been the Member of Parliament for Doncaster North since 2005 and served in the Cabinet from 2007 to 2010 ... under Prime Minister Gordon Brown. He and his brother, David Miliband, were the first siblings to sit in the Cabinet simultaneously since Edward, Lord Stanley, and Oliver Stanley in 1938.Born in London, Miliband graduated from Corpus Christi College at the University of Oxford, and the London School of Economics, becoming first a television journalist and then a Labour Party researcher, before rising to become one of Chancellor Gordon Brown's confidants and Chairman of HM Treasury's Council of Economic Advisers. When Brown became Prime Minister in 2007, he appointed Miliband as Minister for the Cabinet Office and Chancellor of the Duchy of Lancaster. Miliband was subsequently promoted to the new post of Secretary of State for Energy and Climate Change, a position he held from 2008 to 2010. Later in 2010, he was elected Leader of the Labour Party   more
0 votes
0 comments
Edward Miliband - Voter Comments
No Comments
Vote & Comment
7

Leanne Wood AM, is a Welsh politician and the leader of Plaid Cymru. Born in the Rhondda, Wales, she has represented the South Wales Central region as a Member of the National Assembly for Wales since 2003. She was elected leader of Plaid Cymru on 1... 5 March 2012. Wood, a socialist, republican and a proponent for Welsh independence, is the first female leader of Plaid Cymru and the first party leader to be a non-native rather than native speaker of the Welsh language   more
0 votes
0 comments
Leanne Wood - Voter Comments
No Comments
Vote & Comment
Leave a comment...
(Maximum 900 words)

Episteme says2015-04-02T19:07:11.4689482-05:00
Report Post
I'm surprised this isn't a more popular poll. It was a very interesting debate and matters to quite a number of people considering anyone in the commonwealth can vote in the next election.

Episteme says2015-04-03T15:08:22.0418659-05:00
Report Post
Hey Dilara, so in the UK, there will be a general election for who effectively rules parliament and becomes prime minister. The next prime minister of the UK, will be one of the people above (Oh please, heaven, or whatever's out there, forbid it's Nigel Farage...)

Kreakin says2015-04-03T15:33:45.6821306-05:00
Report Post
They are far right and have pushed the gov to a further right position that has countered the lib dems being in power also. Without Ukip the gov would have more central leaning policies esp on immigration.

Philocat says2015-04-03T15:58:53.4418013-05:00
Report Post
The lib dems have had a liberalising effect on the conservatives so there is a vacancy for a right wing party. UKIP fulfils this niche. Furthemore, Farage doesn't dislike immigrants (his wife is one), he just recognises that Britain can only sustain a finite amount of people, and that immigration puts a strain on public services.
Privacy Policy | Terms of Use
Sitemap | View Desktop Version
©2020 Debate.org. All rights reserved.